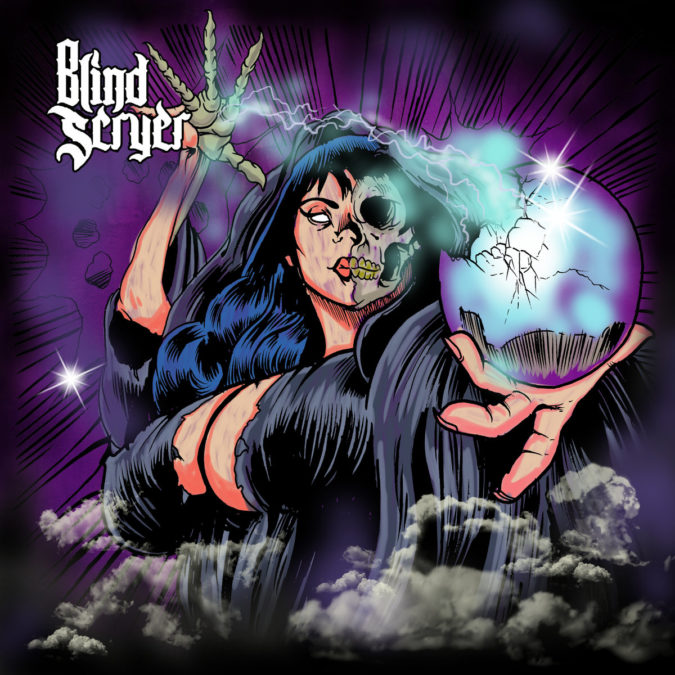 Let’s be real, much like how elitism is a real thing in metal – you know, when someone likes a singular genre or musical style and no matter what, to them, anything else is lame crap – so is being territorial, to some degree.

For the record, I admit that I possess traits of the latter, which in this case means being somewhat proud or animated about a band that also originates where you come from. Today’s subjects are an ideal example of this, they call the place of my birth (Louisville, Kentucky) their home, too. Though I’ve not resided there in decades, I’m still very much plugged into its music scene and what it has to offer. When it comes to BLIND SCRYER, the offering is immense.

Not just that, but also far, deep, and wide-ranging, when you get down to breaking out the ruler to get more precise measurements. Once you begin to ascertain those, you shall quickly discover that BLIND SCRYER – Blair Yoke (vocals), Jeff Smith (guitar), River Jordan (guitar), Jeremy Stein (bass/cello), and Trent Combs (drums/vibraslap) – occupy an astounding area of sonic mass. As is often the misstep of many in these modern times, numerous people are quick to cast these guys into the doom category. Sure, they are not wrong or anything, yet what they may instead be is someone with a knack for taking the path of least resistance, also known as The Easy Way Out.

Maybe they just have a rudimentary grasp of the types of rock or metal are out there, who knows, but BLIND SCRYER falls into both of those. Yes, rock and metal, and at least ten subcategories of metal – from the aforementioned doom to proto, traditional, and heavy metal… yet so, so much more.

From the very rollout of the introductory track, “Ride The Sun“, there is a feeling of something different happening here. Quite an upbeat, lively number best described as having vibes of classic Saxon ala ‘Strong Arm Of The Law‘ era, with vocals a bit reminiscent of The Cult’s Ian Astbury at times. Now, is that intriguing enough to piqué your curiosity? It should be, because it just tweaked mine and I’ve heard the song and this album quite a bit recently… and now, you should, too.

Things take a noticeable detour into a bit slower, more blues-ish type styling after that first track, as the Danzig-meets-Orange Goblin nature of “Snake Handler” strikes. It occurs again as “Delta V,” a chunky, swaggering deluge of molten molasses, serves up the first solid stand out of the album. The morphing shift of musical styles continuing in the subtle proggy undercurrents of “Mask” before taking a header into the pool of murky doom provided by the title track, “Blind Scryer“.

Nearly every moment of music on this album possesses a very serpentine quality about it, once injected into the listener’s head by way of their auditory canals, it slithers ever deeper. “Backslide” is a twisting tumult of groove-infused moves from orderly to chaotic; a calm delivery of minimal instrumentation and vocals one minute, explodes into a sonic barrage the next.

For the last third of the album, the doom establishes its superiority beginning in the seventh track, “Song 4“. An ominous-hued riff soon melds with a cadence of crunchy rhythms and soaring vocals, taking us deeper into this more traditional type of heaviness. The guys then instill a dose of inebriating blues into the length of the slow-simmering “Ten Year Bender“, doubling down on the song’s appeal factor with ample grooves to boot. They deliver it all in a not so fast, but we’re-absolutely-getting-loose, laid-back feeling, jam-type handling.

On the last track of the album, the message and the method are made clear with “Slow Movin’” and its sinister mugginess. Certainly, another stand-out selection, the song’s smothering haze of dense guitars, bottom-heavy bass lines, and battering drums are the vehicle by which piercing vocals arrive. There’s a slightly sludgy underbelly to this one, yet also an almost implied sense of urgency permeates every note and passage. Despite the title, this song seems to end a lot sooner than you would like it to, bringing the album to a close that leaves you wanting more.

Being that the eponymously titled album from BLIND SCRYER is the initial full-length movement from a band birthed in 2016 and that they are already at work on an EP to arrive in the near future, it is an impressive first strike. What the band is able to cull from multiple sources and inspirations, then mold into this album using the tools of their talents, is respectable. It will be interesting to see and hear what the future holds for BLIND SCRYER.

Stream the self-titled ‘Blind Scryer‘ album provided in this review or head over to Bandcamp for further streaming and purchase options.