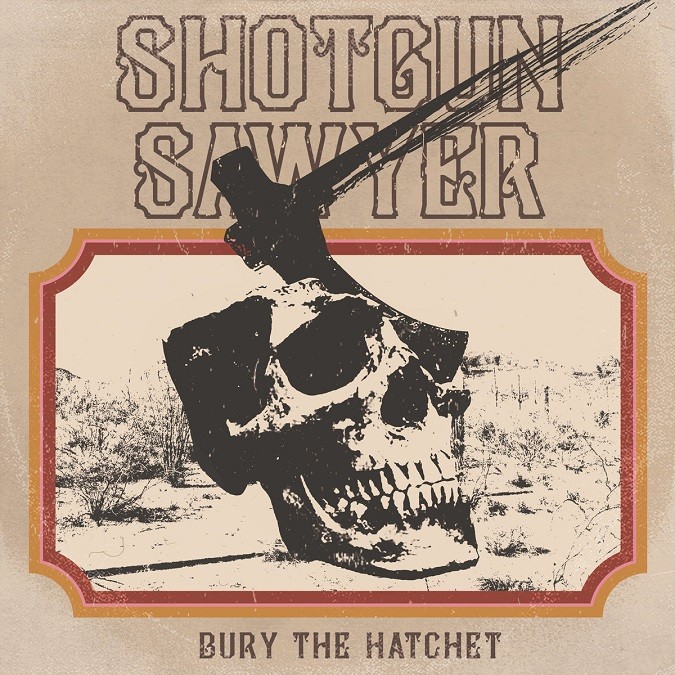 Auburn, California‘s SHOTGUN SAWYER released their second full-length album, ‘Bury The Hatchet‘, via Ripple Music a couple of weeks ago in mid-April.

SHOTGUN SAWYER sprouted in January 2015, the heavy blues-rock trio – vocalist and guitarist Dylan Jarman, bassist Brett Sanders, and drummer David Lee – released their first recording, simply titled ‘E.P.‘ in late September of the same year. A début full-length ‘Thunderchief‘ followed less than a year later in August 2016. “You Got To Run,” a 7″ single released in July 2017, would now be considered a bit of a teaser into their second full-length, with those two songs (B-side is “Backwoods Bear“) now included on ‘Bury The Hatchet‘. The steady stream of releases building up to the new album all has a common denominator… smoothness.

The kind of smooth that’s too cool for school, but while we all know school sucked, SHOTGUN SAWYER could teach us all a thing or two about songwriting. Their second full-length ‘Bury The Hatchet‘ shows the band doing what they do best – taking us on a trip bound for long-distance driving along the back roads of smooth blues-based, heavy rock n’ roll from within a pristine, classically vintage pickup truck that’s chock full of head-nodding riffs and sexy rhythms for swaying of hips.

The vocals of Dylan Jarman remind me of a lower-pitch Jack White for unknown reasons, possibly the clarity and crispness of his inflections and delivery. Regardless of my oddball thought associations, Dylan has a clear, sultry tone with a slight rasp at times, and in half the songs you can hear the smile in his voice. These are also not songs you’ll need to try to decipher lyrics on. Jarman is easily understood, regardless of the monstrosity of his own guitar tone, the bass throttling from Sanders, and the steadfast hammering of Lee. The songs are beautifully structured, taking you on a tempting trip around your own head with each track. Astoundingly compelling in its subtle, slowly building allure. The number of times I realized I was subconsciously swinging my head around in circular nods during every listen to ‘Bury The Hatchet‘ is like trying to count to the end of the full decimal points of π (pi).

From the opening scratches of upbeat banger “Aint Trying To Go Down Slow“, to the dreamily somber “Son Of The Morning“, and on to the traditional blues-heavy tempos of “When The Sun Breaks“, this is an album meant for nights beside a fire. The potential of that fire to be sparked from your lighting aflame all your crappy rock albums that you will never bring yourself to listen to again after experiencing the soul-burning heavy blues of ‘Bury The Hatchet‘ is inconsequential.

SHOTGUN SAWYER‘s ‘Bury The Hatchet‘ was released on April 19th, and is available on limited vinyl press (color splatter and black vinyl), CD, and digitally on Bandcamp through Ripple Music. It’s also now up for digital streaming through various outlets such as Spotify, Apple Music, and others. We have a Bandcamp full-album stream below, as well as their video from last Fall of “Strawberry Jam“, which is an extended live jam in the studio.

The band is currently touring the U.S. West Coast – here are the remaining dates: