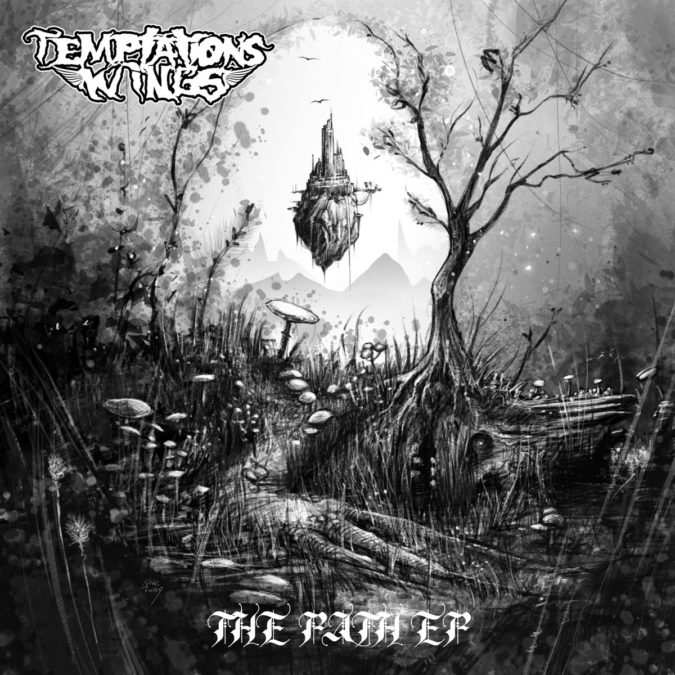 Set to arrive May 17th, ‘The Path‘ is a multipurpose sonic snapshot of the band in real-time, as they involve themselves in various current events. See, TEMPTATIONS WINGS are a band in the midst of evolution and growth after their transition from a trio to a four-piece band in January of 2018 [news article]. Already well upon their way as an established trio when the band released the critically acclaimed conceptual album ‘Skulthor Ebonblade‘ in 2017, guitarist and vocalist Micah Nix, drummer Jason Gardner, and then-bassist Chad Barnwell felt that changes were necessary.

Enter Chad Barnwell’s previous bandmate in Through The Fallen, bassist Ryan Fox, whose entry here allowed Chad to move to a second guitar slot with TEMPTATIONS WINGS. That move opened up some incredible possibilities for the band, something I immediately noticed when I saw them as a quartet for my first time in early 2018. Now operating with a dual guitar presence, the band’s music embraced incredibly new dynamics within it, while also expanding in its overall scope. These revelations revealed an amazing new component, one that provided a freeing outlook to the players, permitting them to experiment and explore new aural territories.

Guitarist/vocalist Micah Nix shared some insight into the band’s happenings of late, stating

“We’re getting pretty excited about heading up to Maryland Doom Fest this year. We felt like we should have something new to offer to all the folks who might be hearing us for the first time. So we decided to go and record two of our favorite new tunes and make a quick EP.“

“We are excited to play this highly regarded festival powered by the DIY spirit of the underground metal community. We look forward to making new fans and catch a lot of bands we haven’t had the pleasure of seeing before at the fest, and along the way on The Path To Doom Tour!“

Riff Relevant is pleased to present you with the exclusive unveiling of ‘The Path‘ EP streaming in its entirety. We are symbolically partnering with TEMPTATIONS WINGS and invite you to embark upon this journey here.

The physical evidence of my claims has now manifested in the form of this new two-song EP, ‘The Path‘. Upon this pair of cuts, “Mirkwood” and “Dimensions“, TEMPTATIONS WINGS retain the traits that established a signature sound for them earlier on. Yet with that comes a more guitar-centered, fuller expanded reach for the band, the axe-men’s reciprocal interplay is crucial, of course. It is that engagement that seems to have emancipated all four members, assuring them that new blood also brings new life, if you will, and here that new life is making itself quite known.

Micah Nix provides some enlightening backstory and broader details for the opening track of the EP:

“‘Mirkwood” is about a trip through the dreaded forest of the same name in The Hobbit. When I was writing the lyrics and coming up with vocal melodies, I told the guys I had this vision in mind of Layne Staley doing a public reading of The Lord Of The Rings.

The chorus is a good example of what I had in mind. This is our first studio recording as a 4-piece and we are very excited about the direction we’re headed… we’re looking to make the most of a great opportunity to reach some new listeners.“

With a brief, melodic guitar intro unfurling the beginning of “Mirkwood“, the song quickly takes on a more traditional metal styling as it flows forth. Barnwell and Nix serving riffs dense and thick, retaining that mellower state as they embark on a solid chug forward, the rhythm section of Gardner and Fox falling in and following suit. The four find a hook-laden groove that listeners should find nearly impossible to resist as Nix injects a powerful vocal performance to top things off. With a six and one half-minute running time, “Mirkwood” covers a lot of ground as it advances, timing and intensities waning and wallowing at varied points along the way. Things go in the other direction too, controlled aggression gradually building, both subtly and not so subtly as the song takes on a clearly canorous thrash quality before reaching a breaking point eventually.

Around the 4-minute mark, Gardner’s rolling bass drum inserts serve as a controlled descent, taking things into a turn toward a more melodious output from the band. It is an outstanding sonic comment from the guys but the overall statement is far from finished as we enter the metallic inferno of the instrumental number “Dimensions“. Make no mistake either, the song is a burning tempest of volcanic guitars and searing rhythms, such that ignite and explode like a fuse successfully reaching its mark. Once things reach their critical burn point, our fiery foursome dial back the fury a bit for some softened, enthralling passages, helped in part by another new thing, keyboards by Andy Bishop.

Guitarist Chad Barnwell, the songwriting source for much of “Dimensions“, shared this about the song:

“I’m particularly excited about the song “Dimensions”. I’ve always wanted to write an instrumental. Many of my favorite artists only write instrumental music and with the right title a lot can be left up to the imagination. I believe we’ve captured that with this song and I’m hoping we can continue with that theme throughout our writing careers together.“

You can head to the Bandcamp page where ‘The Path‘ EP is both streaming and available to purchase.

Riff Relevant is a proud co-sponsor of the upcoming MARYLAND DOOM FEST 2019 and I couldn’t be happier to have TEMPTATIONS WINGS as one of the many incredible bands that will perform at this year’s edition of the event. Set to take place at Cafe 611 and Guido’s Speakeasy in Frederick, Maryland between June 20th – 23rd, TEMPTATIONS WINGS will play on Day 3 of the festival.

On their way to Maryland, TEMPTATIONS WINGS will stop to play some live gigs along the way, a run dubbed “Path Of Doom 2019“. In July, after returning home and recuperating from their campaign north, they will appear alongside Bewitcher supporting the Holy Grail and Striker tour’s Asheville date. Find all of these listed below.