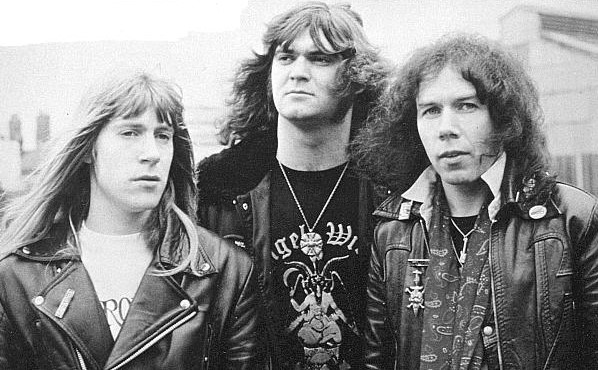 Lucifer is on the loose in London during the mid-to-late Seventies… but not the little red, horned, cloven-hoofed caricature most envision at the mention of the name.

No, this Lucifer was a band comprised of guitarist and vocalist Kevin Heybourne, guitarist Rob Downing, drummer Steve Jones, and bassist Barry Clements, but one that soon disbanded. Jones joined up with Bruce Dickinson and they formed the band Speed, while two of the three left remaining, Kevin Heybourne and Rob Downing, united with bassist Kevin “Skids” Riddles and drummer Dave Hogg in the newly christened ANGEL WITCH.

Downing wouldn’t be there long, though. He soon exited after the name change, thus the band remained a trio for the time being. The year was 1977 and the heavy metal movement was well underway around the globe, but the three players within ANGEL WITCH were on the verge of helping to kick-start something altogether new. Exploring ever heavier musical elements, while instilling melodic nuances and healthy amounts of speed-driven playing, the trio independently issued a pair of back-to-back demos, ‘1978 Demo‘ and ‘Demo 1979‘. “Baphomet“, a song from the first demo, garnered attention for the band after it was included on a sampler type compilation from EMI Records, ‘Metal For Muthas‘ in 1980.

Alongside acts like Iron Maiden, Praying Mantis, Sledgehammer, and Samson, the compilation gathered several of the top bands from what was being called the New Wave Of British Heavy Metal, or NWOBHM for short. EMI signed ANGEL WITCH at this time, but the deal was soon canceled due to band manager Ken Heybourne refusing to hand them over to the professional management the label insisted upon. The band did manage to get ‘Sweet Danger‘, a three-song EP, recorded and released through the label during their brief time with them.

The EP’s title track landed on the U.K. music charts, where it spent a single week at No. 75 (the lowest position in the charts), ultimately acquiring them a listing in The Guinness Book Of World Records as the “least successful chart act of all time” (this is repeated by fellow NWOBHM group Grand Prix in 1983, with their ‘Keep On Believing’ 7″). Still, all was not lost nor wasted, as ANGEL WITCH signed with the label Bronze Records, working with producer Martin Smith to record and release their self-titled début album in 1980.

Despite the phenomenal first official full-length outing, ANGEL WITCH was a band in turmoil all during the period of its recording. Subsequent to its release, Dave Hogg was fired from the band, while Kevin Riddles left to join the band Tytan. Using other musicians, Kevin Heybourne tried to keep ANGEL WITCH going for a bit but grew disillusioned. Eventually, he announced the end of the band in 1981 and joined another English band active at the time, Deep Machine.

The cessation of ANGEL WITCH was short-lived, as Heybourne reactivated it in 1982, with Deep Machine members Roger Marsden (vocals) and Ricky Bruce (drummer), as well as a new bassist, Jerry Cunningham. This would be a very brief incarnation though, as Marsden’s voice did not mesh well with the music of ANGEL WITCH and Heybourne soon resumed handling lead vocals. The band was an on-again, off-again entity for the next few years, with Heybourne joining another band, Blind Fury (previously Satan), as their guitarist in 1983. During this seesaw of ups and downs for ANGEL WITCH, they did record two demos, ‘Give It Some Tickle‘ and ‘Demo #3‘, and release two singles – 1981’s “Loser” and 1985’s “Goodbye“.

In 1984, an official announcement of the return of ANGEL WITCH was declared, a version of the band that saw Kevin Heybourne patching things up with drummer Dave Hogg. The pair, along with ex-Marquis De Sade bassist Peter Gordelier and singer Dave Tattum, recorded and released ‘Screamin’ ‘N Bleedin” through Killerwatt Records in 1985. It soon seemed like old times once again, as before long Dave Hogg was sacked and replaced by drummer Spencer Hollman.

ANGEL WITCH did not waste any time when it came to recording and putting out album number three, 1986’s ‘Frontal Assault‘, the follow-up to ‘Screamin’ ‘N Bleedin’. By fan’s perspectives, this record was a drastic departure from the musical styling of the two previous records, one containing more melodic qualities. As was a seeming tradition by this time, singer Dave Tattum was let go sometime after that album’s release and ANGEL WITCH went forward as a trio once again.

As the next decade loomed for the band, Heybourne decided that the United States was the land of opportunity for ANGEL WITCH and shared his plan to move stateside. The other members had no way of accomplishing this, having stable lives in their home country, but the move occurred and an American version of the band soon manifested. Joining Heybourne in it was a veritable Who’s Who of players from the Bay Area of California – bassist Jon Torres (R.I.P.; Lȧȧz Rockit, The Lord Weird Slough Feg, Warning S.F., Ulysses Siren), drummer Tom Hunting (Exodus, Piranha, Wardance, IR8), and guitarist Doug Piercy (Blind Illusion, Heathen, Anvil Chorus).

1990 delivered a live album release from Metal Blade Records, the simply titled ‘Live‘ was recorded (guess!) live in Los Angeles. Interestingly, Metallica drummer Lars Ulrich can be spotted in the audience within the live photos on the back cover and insert of the album (with time revealing Metallica to be reverent fans and vocal supporters of ANGEL WITCH). After just a handful of performances, by all accounts, this version of ANGEL WITCH functioned well, and with the musicians’ name recognition, there was a high demand to see them live. They had booked a series of shows across the U.S. when one day before the band was to embark upon this tour, Heybourne was arrested in relation to some pending issues regarding his immigration to America. Bound up in legal red tape, time began to pass and with Kevin unable to hands-on guide the band, ANGEL WITCH soon lost its momentum for the time being.

In 2011, ANGEL WITCH, with Kevin Heybourne on guitar and vocals, Will Palmer on bass, and Andy Prestidge on drums, went into the studio with producer Jaime Gomez Arellano (Cathedral, Ghost, Paradise Lost) and guitarist Bill Steer (Carcass, Firebird). What resulted was a true return to their roots, the band’s first new album in 26 years (though some songs were originally older compositions) – 2012’s ‘As Above So Below‘, released via Rise Above Records (Metal Blade in the U.S.).

ANGEL WITCH has remained active since that album’s release, regularly touring and playing festivals around the world, like the upcoming dates listed below. With over four decades of music and history under their belts, ANGEL WITCH has achieved a legendary status the likes of which very few bands ever know. As pioneers of NWOBHM, and a highly influential act to the metal, proto-metal, and doom genres, ANGEL WITCH continue to spread the leathery wings of heavy music in the contemporary version of the band: Kevin Heybourne (guitar and vocals), Will Palmer (bass), Jimmy Martin (guitar), and drummer Fredrik Jansson (ex-Witchcraft).