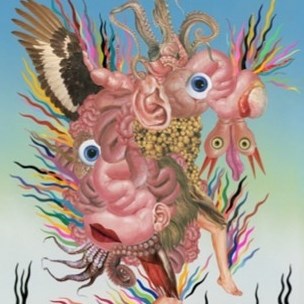 ‘Ape On Sunday‘ is the latest aural expedition from the Artaca, California based unit and is set to arrive June 28th from Cardinal Fuzz. It finds David Johnson (guitar, vocals), Johnny Webb (bass), Tavan Anderson (drums), Anthony Taibi (guitar), and Mike Deiter (synths, keys) stepping even further musically outward than previous releases. Within the intimacy developed from exploring experimental directions in style and sound, this is a construct that is ofttimes hypnotic and liberating.

With a kosmische core rooted in its music, ‘Ape On Sunday‘ contains hypnotic outer sound qualities reminiscent of everything from Hawkwind to Wooden Shjips. Surrender the time it takes to absorb two of the WHITE MANNA album’s tracks presented here, the title track “Ape On Sunday” and “Eye In The Cloud That Serves As Thunder“, and you will come to know audio seemingly not of this Earth.

‘Ape On Sunday‘ is available on black vinyl LP, CD, and digitally, along with a limited edition purple vinyl option. Set for release June 28th from Cardinal Fuzz, it is adorned with amazing artwork by John Vochatzer, with layout design by Matt Goldberg. Pre-order available now at these links: