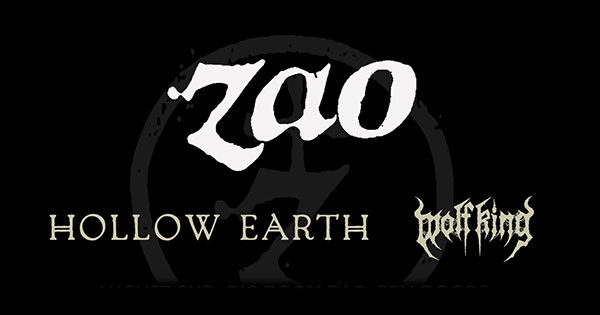 Joining ZAO in support roles for the entire trek will be the Bay Area’s abrasive WOLF KING and Detroit’s devastating HOLLOW EARTH. The jaunt will launch in Columbus, Ohio on August 2nd and then wrap nearly two weeks later in Morgantown, West Virginia (all dates listed below).

With origins dating back to 1993, ZAO is one of the longest-running and most enduring pioneers of the metalcore genre of aggressive heavy metal. Despite numerous lineup changes, inner turmoil, and ostracization from both the religious and secular music communities, ZAO has risen to the challenge and persevered time and time again.

Though identified as a Christian band by others during their earliest era, ZAO has gradually removed themselves from that designation over the years. They no longer consider the band to be such, but rather a group of open-minded artists, with guitarist Scott Mellinger going on record stating that ZAO “…would prefer to just be known as a metal band“.