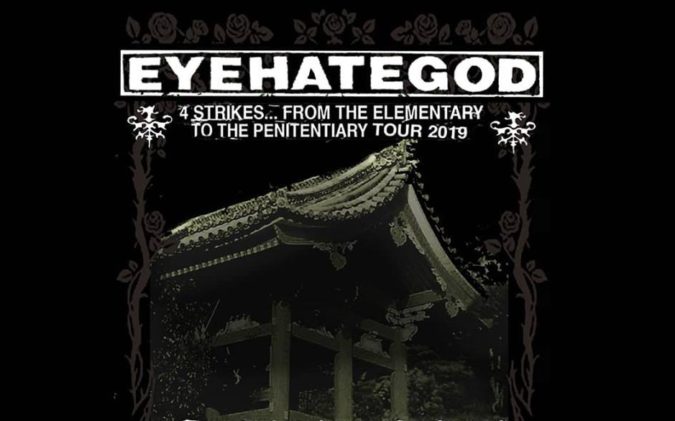 The reality is the sonic-powered southern nihilists have recently spent an impressive amount of time on the road, and not just within the United States. Currently on tour in Europe with Dopethrone, EYEHATEGOD will be back in the U.S. by month’s end, just in time for their August 29th appearance at the 2019 edition of the Muddy Roots Festival in Nashville, TN. That will immediately be followed by a performance at Chicago’s famed Scorched Tundra XI Fest on August 31st.

As the old adage goes, “there is no rest for the wicked”, even if it is just their music that is so iniquitous nowadays. Yes, hot on the heels of EYEHATEGOD‘s festival dates, they will then storm the Northeastern U.S. region with none other than fellow sludgemongers COME TO GRIEF. This leg of dates will launch in New Haven, Connecticut on September 4th, hitting several key locations before wrapping up in Manchester, New Hampshire on September 10th.

The pair of muck encrusted malcontents will be joined by varied support bands at these shows, including Churchburn, Intercourse, Sheer Terror, All Out War, Dutchguts, Merauder, Barishi, Kiefcatcher, and Angel Morgue. However, the upper eastern seaboard vicinity of the U.S. will not have any exclusivity when it comes to experiencing the soul incinerating abrasion that is EYEHATEGOD live.

In October, the onslaught continues as our Pelican State heavies head westward, catching up with Negative Approach, Sheer Terror, Final Conflict, and The Accüsed A.D. for a west coast trek. This round will begin in Seattle, Washington on October 23rd and head south from there, coming to a close on October 29th in Santa Ana, California.

– EYEHATEGOD “4 Strikes… From The Elementary To The Penitentiary” Tour 2019 –