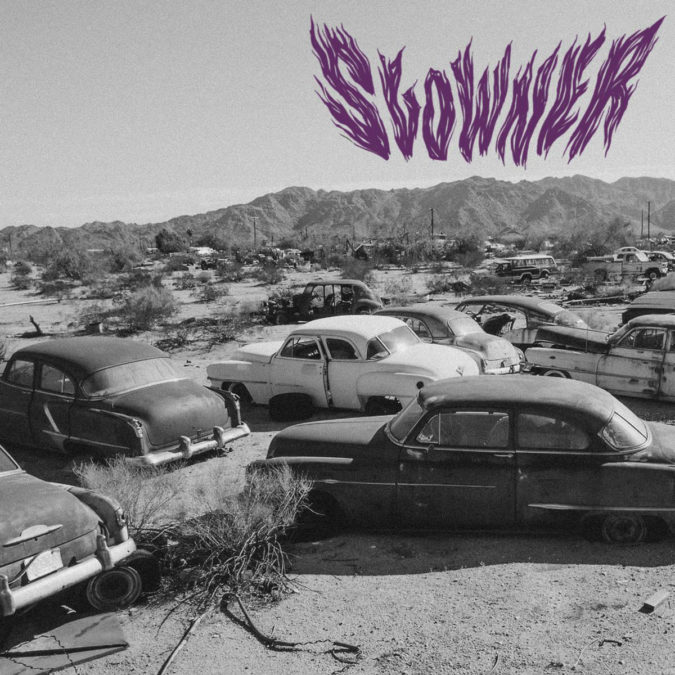 Ten months after their formation in October 2018, SLOWNER from Recife, PE (Brazil) serves up a five-song, self-titled EP deserving of our recognition.

Arriving back during the middle of this past July, the eponymous début effort contains an intoxicating elixir of stoner / desert rock with both traditional elements and contemporary ones. The band – Lucas (guitar, vocals), Issac (guitar), Renata (bass), and Gabriel (drums) – toss in various kinds of enhancing elements with touches of psych-rock, doom, sludge, and more to boot.

After the cranking of a car engine gets things underway on “Any Street,” we find ourselves subjected to rich, thickened riffs with flavorful grooves to guide us. To me, there is a laid-back feeling permeating things, as if the band feels no pressure to perform, yet perform impressively they do. There is an ever-present fuzzy quality enveloping the music as it pushes its way forward, giving things a gritty underbelly, while up on top is solid, clean vocals.

Our fearless foursome tap into an energy source for song two, “Split,” for the most part a powered-up, charging number. Along its path, we take a detour once or twice and they yield some profusely exuberant moments of groove and doom. Be careful where you might possibly find yourself jamming this one though, for there are a few strategically placed F-bombs delivered in its midst… along with a damn fine guitar solo.

Track three turns out to be one of the strongest songs presented, the lysergically-laced “Insomnia.” Within a crawling haze of opiated headiness held in place by rumbling bass lines, the eventual guitar generated grooves take us places. Deliberately paced with protracted passages taking place, they alternate between displays that contain musical molasses, and ones a bit more manic.

Riders on the storm arise within “Nightcrawler,” its squalling intro segment galloping in a gust once the sedate start of the song relents. This track provides some of the best interactions between the players, as the partly wailing vocals resonate upon high, cymbals crash and the crush of the song continues to rumble on. There is also a change in those same vocals, a hastily heaved grunt once, and a switch to a guttural utterance briefly.

Without a doubt, it is the final song here that finds SLOWNER casting their most powerful sonic hex yet with “Witch.” Quite traditional doom in nature, like that of the iconic Cathedral or Candlemass, the spatial area here is filled with morose riffs. They echo across an expanse rippling with vintage-tinted nuances, while dour vocals lament away. This song’s sonic excellence is matched only by the visually stunning official video (below) that was recently attached to this most superb musical standard.

Yes, SLOWNER slows their roll with one hell of a downer EP, one that is a bit hypnotically sedating at times. Yet, there are other times where we are dosed with a most divine rite of heavy rock, ceremonial and, yes, sometimes a bit sinister in feel.

Discover such for yourself by partaking of the somewhat solemn self-titled from SLOWNER in this review or visit Bandcamp for further streaming and purchase options HERE.