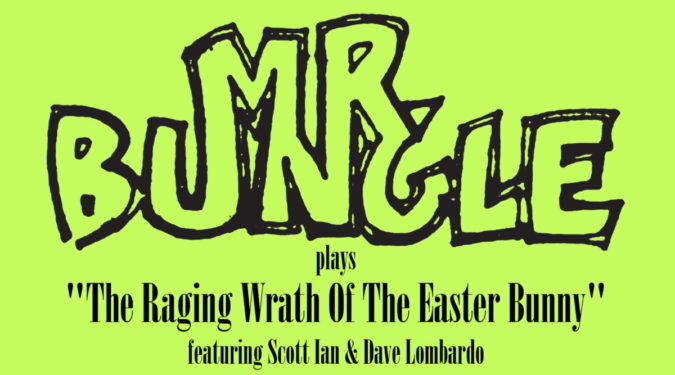 From the farthest reaches of left field comes highly unanticipated news from MR. BUNGLE! Yes, you read it correctly, MR. BUNGLE… and they are returning for some live actions.

Mike Patton is no stranger to working with Dave Lombardo thanks to the pair’s involvement together in bands Fantômas and Dead Cross. Patton shared the following comment about working with Lombardo, along with Scott Ian, relating to MR. BUNGLE, saying:

“To have Dave and Scott with us on this suicide mission is more than an honor. THEY are a big part of the reason we wrote this stuff in the first place, and to realize it 30-plus years later with these maestros is an absolute miracle … we can finally play this teenage nonsense correctly! A total catharsis for us.“

“At our very first show, at the Bayside Grange Hall, November 30th, 1985, we played Slayer’s ‘Chemical Warfare’ and an S.O.D. cover. I mean, are you kidding?? We WORSHIPED those guys! And now they’re gonna PLAY in our band?“

That offering, the band’s 1986 self-produced, and self-released demo, ‘The Raging Wrath Of The Easter Bunny‘, presented live on these dates will mark the first time MR. BUNGLE has performed in almost 20 years, and the first time these songs have been played live in over 30 years.

The origin of the nearly impossible to categorize MR. BUNGLE begins with a group of high school friends in Eureka, California, circa 1985. Taking their name from a 1950’s era educational film for children, the band’s unconventional structure utilized a wide assortment of instruments, samples, and an array of musical genres. Live shows often featured members dressing up – even hiding their identities with masks and wearing jumpsuits early in the band’s career (sound familiar?) – and performing incredibly frenzied originals and cover songs.

In the band’s initial fifteen-year run between 1985 and 2000, MR. BUNGLE released four demo tapes before signing to Warner Bros. Records and releasing three full-length studio albums between 1991 and 1999. The official studio albums released were 1991’s self-titled ‘Mr. Bungle‘, 1995’s ‘Disco Volante‘, and 1999’s ‘California‘, but before these albums and their professional, studio polished contents came to be, there were those demos.

The one in question, the 8-song ‘The Raging Wrath Of The Easter Bunny‘ (streaming), was used by a then 18-year-old singer named Mike Patton to land the vocalist spot in another rising act. This happened when Patton handed it (on cassette) to guitarist Jim Martin at a 1986 Faith No More show, paving the way for the vocalist to ultimately join that pioneering alternative metal group and, as they say, the rest is history.

– MR. BUNGLE plays ‘The Raging Wrath Of The Easter Bunny‘ –