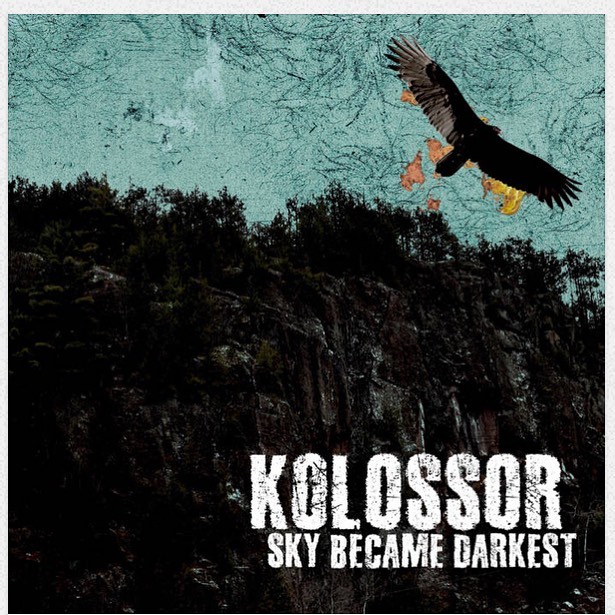 The five-song ‘Sky Became Darkest‘ EP arrived July 12th and finds the fatalistic trio – Greg Frisenda (guitar, lead vocals, keyboards), Jay Barringer (bass, backing vocals), and Jerry Arsenault (drums, percussion, keyboards) – tripling down on their song-crafting methodology. This process is something that Riff Relevant has accompanied the guys upon since their 2017 self-titled EP was reviewed, followed by the review of 2018’s ‘Crown Of Horns‘.

If it ain’t broke, don’t fix it, right? This is a legitimately construed mission statement for things to proceed upon and they do exactly that with “Sunbird Rise.” Possessing catastrophe worthy riffs quickly unfurling after a brief flurry of instrumentation launches the track, the listener lurches into an avalanche of Motörhead-like sonic bulk. With its fast paces and whiplash worthy charge forward, this bird is more like a bull in a china shop, to be sure.

But then, KOLOSSOR has always been about the intensity of their density and with the second track, “Korruptor,” the trio taint things in the ways that only they can. Boasting the longest running time of this material, 7-minutes and 16 seconds, the sound and styling of the song are reminiscent of Mastodon. Brawny guitars, riveting rhythms, and muscular vocals – including ones derived from the use of a vocoder – meld with the progressive sludge emitted and combined, it all makes for one hellishly heavyweight number. It is one that features some fantastic guitar solos, ones rich with tone and executed with flare.

After an airy, psych-centralized instrumental piece “Tongue Of Fire” serves as an intro, the staggeringly upbeat “Radiance” arrives. It winds its way along with smoldering swagger but even it falls before the punishing, EP closing title track, “Sky Became Darkest”. This is the culmination of all things touched upon previously, ala the aggression, the grooves, and unrestrained bombardment of the listener. Like a chugging locomotive, it barrels right at you while beefy vocals, and impossible to ignore drumming drives this behemoth.

The ‘Sky Became Darkest‘ EP from KOLOSSOR is not a feel-good, hope-inspiring effort to me. Instead, it is massive and chaotic at times. But it is a controlled type of tempest, despite its faster playing and speedier qualities. Discover these things for yourself now by streaming it in this review or heading over to Bandcamp for further streaming and purchase options HERE.