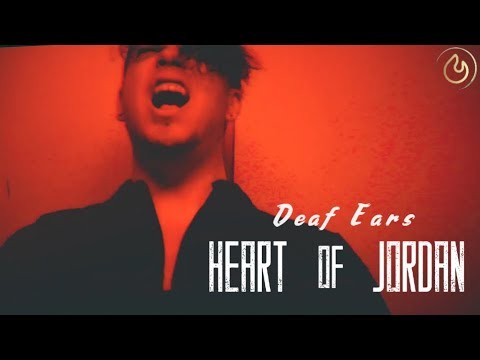 The “Deaf Ears” video is one that the band – Preston Mailand (vocals), Elijah White (guitar), Eric TenEyck (guitar), Alfonso Civile (bass),  and Andrew Everett (drums) – intends not to fall upon… or blind eyes for that matter. The performance style clip captures HEART OF JORDAN in a most highly effective element utilized by the band, live on stage. There, they masterfully execute their incendiary blitz of metalcore and melodic thrash with profound intensity and results.

Guitarist Elijah White recently spoke about the song and video both saying:

“The song personifies addiction as “the creature” that “lives inside of your mind”, and how that creature can persuade an addict to stay addicted and isolate themselves from those who want to help.

The video was shot at a prominent local venue in our hometown of Lansing MI, The Loft. Proprietor, Jerome White, has been a long time supporter of the local scene and treats the bands very well.

The shots in red were filmed in the Loft cargo elevator. They were inspired by the M. Night Shyamalan film, Devil.“

“Deaf Ears” hails from the eponymous album released from HEART OF JORDAN in 2018, and was reviewed HERE. The independently released effort has gradually gained increased traction with metal fans over time, thanks to word of mouth and the band’s incredible live shows. Packed with deep, winding grooves amid teeth-rattling rhythms, razor-sharp riffs, and multifaceted vocals, it is a fine representation of the very best in modern metal.

Open your eyes and auditory canals for the “Deaf Ears” official video below; we are also including a stream of last year’s Heart Of Jordan album in case you missed it.

See HEART OF JORDAN live at the following events: