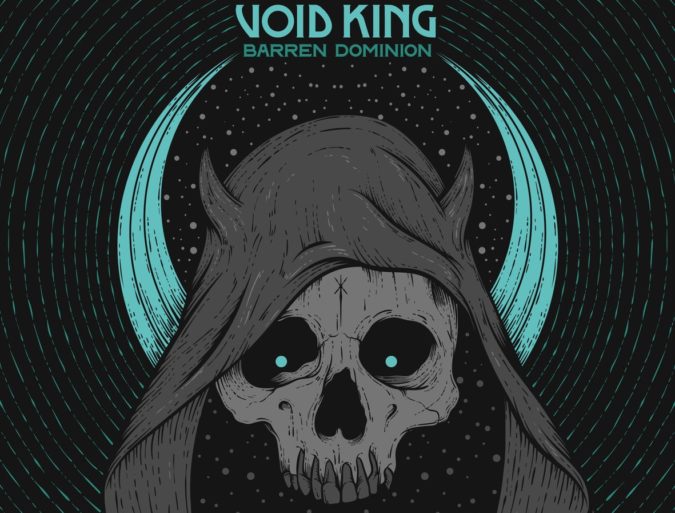 The eight-song ‘Barren Dominion‘ is set to arrive digitally and on CD from Off The Record on September 13th (vinyl expected on a yet-to-be-determined date). Today’s revelation includes the album artwork – created by Soares Artwork‘s Diogo Soares – and tracklist, along with the first single ready for public consumption, “The Longest Winter“.

The song reflects the raw emotion VOID KING currently channels after embracing a darker, heavier sound, one that resulted from three years of struggles and triumphs. That is the length of time that has passed since the band’s 2016 studio outing, ‘There Is Nothing‘. It has been a period marred by personal and group trials and tribulations, ones that at points in time seemingly threatened the continuation of the band.

“At the heart of it, this record is who we are. Jason [Kindred – vocalist] and I have been through some pretty trying times in the last couple of years and managed to rise above it all. I wouldn’t go so far to call this a concept record, but there is a theme running through the entire thing.“

Recorded and mixed in Bloomington, Indiana with Niko Albanese, ‘Barren Dominion‘ was then mastered at Comatose Studios by Dennis Pleckham (guitarist for the band Bongripper). VOID KING drummer Derek Felix reveals the band’s thought processes behind their initial plans for the recording saying:

“We needed people working on this record that understood not just the sound that we were going for, but also the vibe that we wanted to hit. Dennis and Niko really hit that perfectly on both fronts. We talked a lot about making sure that this record was massive. Between recording the drums in an empty warehouse and having the guitar player from Bongripper master the record, I would say that this album is exactly what we were looking for.“

If “The Longest Winter” is an example of what the new album’s overall contents possess in songwriting and execution, VOID KING clearly has crossed over to the dark side. Riddled with sludgy undercurrents and riveting, ominous vibes, the song is a slowly advancing threnody, one rife with lamenting elements throughout. Check it out for yourself below.

‘Barren Dominion‘ is set for release September 13th via Dutch label Off The Record; with location-based CD pre-order links here: