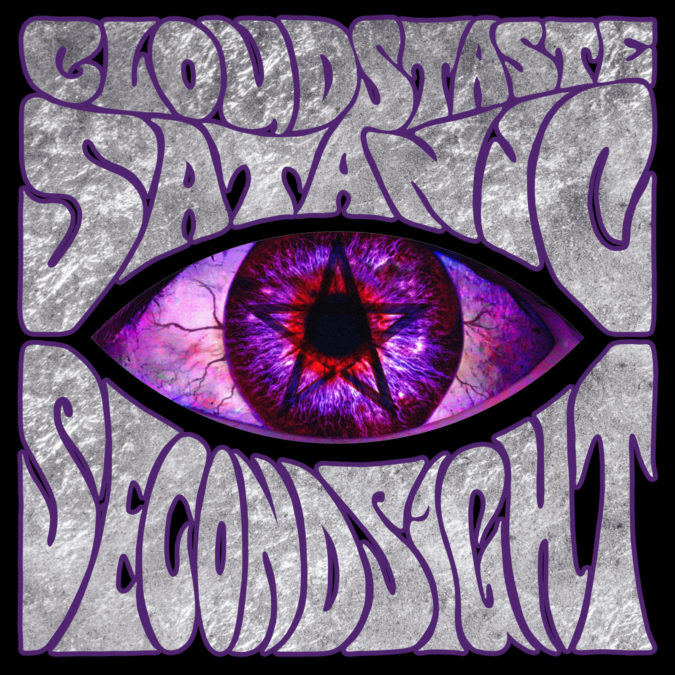 They’re already back! As promised, instrumental post-doom quartet CLOUDS TASTE SATANIC will release their sixth album on October 31, 2019, or… Halloween.

The new record ‘Second Sight‘ features two 20-minute songs on two sides of vinyl and is the second of two CLOUDS TASTE SATANIC records out this year.

Consider ‘Second Sight‘ to be Part 2 of a two-record set, which sees the band maintaining their “Riffs Rule All” credo, with added doses of introspection by way of mixed tempos, spacy interludes, jazzy breaks, and epic finales that started with April’s ‘Evil Eye‘. As with its predecessor, each song is divided into three parts and explores the worlds of Lesser and Greater Magic, as inspired by The Theory and Practice of Satanic Magic, which is part of The Satanic Bible.

Lesser Magic (first track “Second Sight“) – “consists of the wile and guile obtained through various devices and contrived situations, which when utilized can create change in accordance with one’s will.” Greater Magic (second track “Black Mass“), also known as Ritual Magic – “consists of the performance of a formal ceremony, taking place, at least in part, within the confines of an area set aside for such purposes and at a specific time.”

“Despite the mystical mellowness the name implies, Second Sight is actually the most aggressive Clouds Taste Satanic record to date. Not sure when that happened, but at some point the doom turned angry.”

Also like its predecessor, as well as the one prior: ‘The Glitter of Infinite Hell’ [review], the album recordings for ‘Evil Eye‘ were engineered and mixed by Ben Rice at Degraw Sound in Brooklyn, and mastered by Alan Douches (High On Fire, Converge, Mastodon) at West West Side Music. The cover and inner sleeve art are original pieces by Goatess Doomwych, whose work has graced numerous doom music covers and artwork posters, including albums by Dead Witches.

Have a listen to the first track (essentially half the album), “Second Sight,” streaming below. Certain pre-order options are available now at the band’s Bandcamp page. The extensive list of album formats is detailed below.

The band is offering a hefty amount of options for physical formats, with a staggered pre-ordering schedule. The physical format vinyl and CD packages demonstrate the care taken into their creation. (All artwork by Goatess Doomwych, with silk-screening by Made In Brooklyn.)