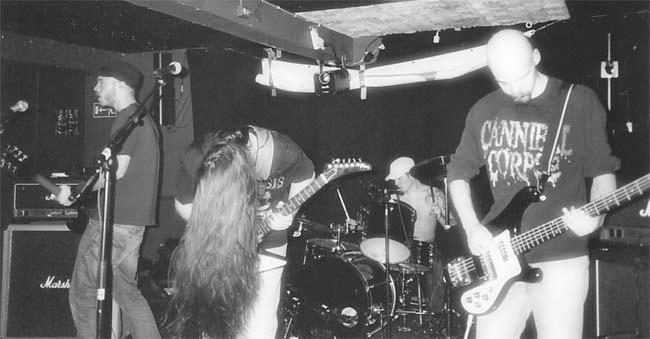 The guys clearly had chemistry when it came to jamming together, for it wasn’t new to them as they had previously worked with one another in other bands. For nearly a year after their formation, the quartet spent excessive hours practicing in… where else? A garage, of course, thus adding legitimacy to any claims of their being a “garage rock” band. Though true, bands like Kyuss, Monster Magnet, and Soundgarden were quite active themselves, and influencing musicians around the world. ASTROQUEEN hinted at such inspirations but were busily developing their own sound, one consisting of ample fuzz-infused, desert rock with occasional psych shading.

The band soon moved recording equipment into their jam garage and went right to work. In their first year together, ASTROQUEEN issued two demos, with the first being an eponymous six-song offering. This self-titled offering was recorded in a local studio and then handed over to Tony Jelencovich (Transport League). The ‘Astroqueen‘ demo impressed Jelencovich enough to where he gave the band the opportunity to perform at Belsepub, his Gothenburg rock club.

This was followed by the five-song ‘The 4-Track Recordings.‘ In June 1999, ASTROQUEEN were given the opportunity to record one track for a Swedish stoner compilation titled ‘Molten Universe: Volume 1‘. Also featured on the compilation were bands such as Dozer, Lowrider, and Mammoth Volume, among others. Bolstered by the reception to the recording and the previously delivered demos, the band was approached by representatives from the German label Monster Zero, voicing their interest to release material from the band.

It was at this point that ASTROQUEEN promptly laid down five tracks to tape from within their garage space. Those tracks became known as the ‘Themes From The Magic Ocean‘ EP and it resonated quite well with fans of stoner rock. Two tunes from this demo, ”Rufus The Space Agent” and ”Asteroid Blaster (Pt. 1)” ended up on the Monster Zero 7”.

By the end of 1999, after the label’s interest in them was piqued from receiving the recent demo, ASTROQUEEN had signed with the U.S. based Pavement Music. Though it would not materialize until 2001, the band’s one and only full-length studio album, ‘Into Submission‘, was produced by King Diamond guitarist Andy Larocque. For better or for worse, this would pretty much be the pinnacle for the guys, as things began to slowly taper off.

Some recordings would eventually surface as ‘The 2003 Sessions‘, a three-song demo. This was followed by a split with the band Buffalo, released by the Argentinian label Dias De Garage, in 2004. Unfortunately, that would be the same year that ASTROQUEEN decided to disband, with members going on to play in such projects as Hearts Of Black Science and Sambassadeur.

In 2014, ASTROQUEEN reformed and started jamming again, although as of yet no shows or future releases have been announced.