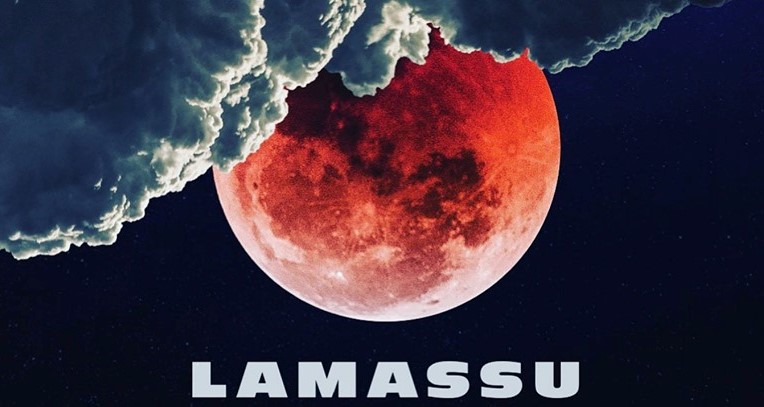 It seems some of us, particularly those that have birthdays in the month of September, missed some type of memo that arrived and read: “See Australia’s LAMASSU For Gift – ‘Into The Empty‘”.

Not saying this is a freebie, like some quasi-legitimate gifts are, not at all. See, or in this case hear, said item which is the seven-song, independently issued, début full-length album release from Melbourne, Australia’s LAMASSU. Lamb Of Who? LAMASSU, a hard rock collective comprised of guys from such well-rooted bands as Motherslug, Borrachero, Olmeg, and Field.

To be more specific – Chris Fisher (vocals and guitar), Matt Dawkins (lead guitar), Nick Rad (drums), and for this recording, Ant Smith (bass) – Al Cooke plays bass for the band’s live settings. Yet, “hard rock” only scratches the surface of what this crew is capable of, proven amid the passages of heavy grunge, progressive rock, post-metal, desert rock, and melodic doom present here.

Speaking of (the) present, the introductory track “Chokehold Companion” sounds as if it came from the not-too-distant past. The past, as in say fifteen-ish years ago, where this song seems to be transmitted from. And “where?” you ask (again).. that’s easy, possibly Seattle circa 1994. No shit. The isolated, monstrously massive, but slow-moving guitar lead, thick as molasses rhythms, and its powerful, emotively clean vocals are profound. “Chokehold Companion” easily fits the time and place where Soundgarden, Stone Temple Pilots, and Alice In Chains were also issuing significant songs and albums, much like this one.

Soon I’ll come to know that first killer track as the primer, or that which prepares one for the grandiose good things to come. Or should I say “Flow“? For flow they do, in chasm-deep rivers of striking riffs, washing over and beneath you, an undercurrent of groove like a riptide.

Then, “Killing Someone” rides the lightning and rings out, gaining more momentum as the guys’ playing interlocks and fuses with more of those aforementioned grooves. Rumbling bass lines meld with riff and chord licks, their joined rhythmic state is an enthralling hypnotic. Later on, the soaring vocals, dark overtones of the music and voice, will turn toward psych-tinged prog rock at one point.

That is just it though, this righteous album has so much left to serve as the slow bounding “Control” grinds its way inward. It has a lot of room to do so, its crescendo rising then falling, like a wind in the sail. At a running time of almost ten and a half minutes, “Control” takes on some heady intermittent areas between displays of doom. Also of impressed interest, the unpretentious vocals reminiscent of Chris Cornell and Seemless era Jesse Leach.

Emotions rear all of their heads throughout the playing process of this album, but just maybe the strongest comes as “Failed“. The gamut of feelings this track drags out of one begins harrowingly sedate and dismal, stripped down to the basics briefly, here and there. Timing changes and tempo intensities result in moments of a sensed uplifting, only to be dashed in further transit.

Don’t let the start of “Under The Watch Of A Crow” mislead you, its seeming levity is a lie. Everything about the song has a fatal potential to it, especially the Black Sabbath-like elements that will come. Plodding and trudging along, while the “You never thought that you’d die” may give you pause… the “And now you’ve met your fate!” assures a concern is just cause.

The second-longest track of the album, one that is a particular favorite of mine, is the to-the-point “I Die“. These Aussies do the slaying with steely riffs laden with irresistible hooks, bone-jarring rhythms, and a vocal swagger second to none. This closing cut has it all impacted, including some fiery, fret roasting guitar work.

Truth is, that holds firm for the duration of the ‘Into The Empty‘ album from LAMASSU, a truly epic opus that must be heard. Not with delay, or hesitation, but with haste and determination, for there’s no denying this worthwhile album will place on many year-end, Best Albums Of 2019  lists.

Stream ‘Into The Empty’ in this review or visit Bandcamp [HERE] for further streaming and purchase options; it is available on 180gm 12” vinyl, CD, and digital download.