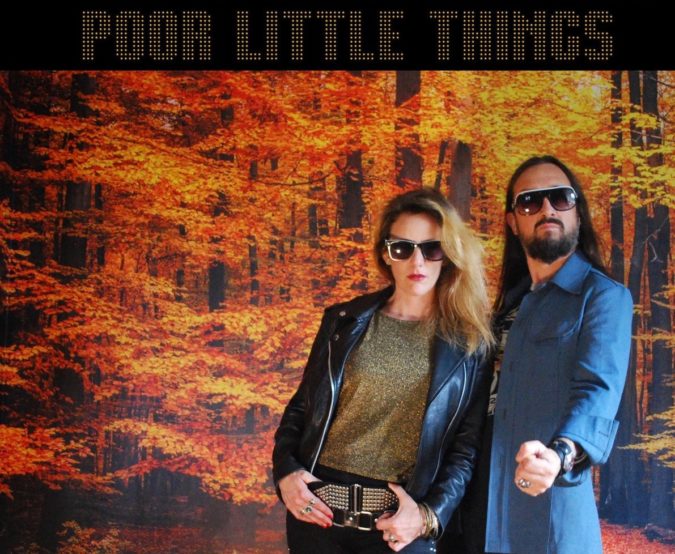 Let me start by asking “Where does the time go?“… and I ask that with true curiosity and inquisitive sincerity, for I have not a clue.

See, it has been almost a year and a half since I tackled the POOR LITTLE THINGS 2018 self-titled EP in a review [HERE] at Riff Relevant. If you missed it, then just know this: Switzerland’s POOR LITTLE THINGS is the collaborative band of singer Tina Jackson and guitarist Dave Talon (Rollerball, The Marlboro Men, Captain Control). For their latest recorded offering, ‘Disco’s Burning‘, the pair were once again joined by drummer and percussionist, Fernando Marlboro.

If you are hip to POOR LITTLE THINGS, then you already know what I am about to say is true. If you are not, then you will quickly come to realize once you hear this band for yourself. There is almost no other active band that is the contemporary embodiment of a period-specific type of music. Last year, I compared them to being “The Runaways meet Blondie at a Bay City Rollers show…“, and while that still holds true, there is so much more to this trio.

For one thing, Tina Jackson encapsulates the same attitude and the confidence that greats like Linda Ronstadt, Debbie Harry, Pat Benatar, or Joan Jett also possess. This realization is established quickly in the span of just a couple of songs. Should you need a substantive example to help you either accept or embrace this, jam down on the opening track “Panic Attack“.

The song is not a one-woman show, for, without question, the enticing, high energy guitars of Talon and in-the-pocket drums of Mr. Marlboro cannot be ignored. Not that anyone would want to, because at the very heart and soul of all POOR LITTLE THINGS music is the very real spirit of rock ‘n roll! Yes, “The Rock’N’Roll” soul is manifested track after track, chord after chord, note after note, and vocal after vocal, time and time again.

It is an alluring magnetism that enchants and seduces here, in such numbers as “Don’t Stamp It Out“, title track “Disco’s Burning“, or “P.L.T.“. Sure, it is rich with pop elements and outright infectious hooks, regardless of however kvlt you like to think you are. Let’s face it, if this band had been one to come about in the late Seventies, we would be revering them now, right alongside acts like Heart or Meatloaf.

That said, and speaking of reverence, there are some songs here that I especially enjoy on a more personal level. I don’t know if it is due to their being somewhat more animated or energized, whatever, but dammit, they jam! “Wait’N On The Line” is one of the first to arrive and there is an instantly recognizable difference to it, from its fiery Chuck Berry guitars and raspier vocals to its locked-in percussion. This is what I would call a “barnburner” of a tune; it is lively and exciting, fast-paced, and unfortunately over too soon, at a little less than three-minutes playing time.

Two other standouts are the back-to-back tracks at the tail end of this record, “I’m Not Going Down Alone” and “Deja Vu“. The first is another exercise in accessible audio, a display of euphoric earworming that embeds itself in your head and refuses to let loose. This one is replete with relatable to-the-point lyrics, repetitive rhythmic patterns, and this band’s almost trademark handclaps.

I’m not kidding about that last item either, for handclaps are used to great effect by POOR LITTLE THINGS and are back right from the start of “Deja Vu“. This one just may be my favorite song from this outing, another one with a slightly edgier quality about it. A lot of that is derived from Dave Talon‘s exhilarating guitar pyrotechnics throughout this rocker, the man is constantly at it here. Tina and Fernando don’t slouch either, each contributing their part to making this fuel-injected cut a real high point of the album.

Once again POOR LITTLE THINGS show themselves to be one of the music scene’s better-kept secrets, though one that needs to be shouted about from the rooftops. If there was ever a band with Top 40 radio appeal, make no mistake about it, this is them. They have everything needed to thrive in that world, their songwriting skills are spot-on and the results are joyfully intoxicating. Their sound is commercial-friendly, yet not sell-out conducive in any way, whatsoever.

I invite you to hear it for yourself by perusing the POOR LITTLE THINGS ‘Disco’s Burning‘ album here and see what you think. You can also go to their Bandcamp for further streaming and purchase options [HERE].