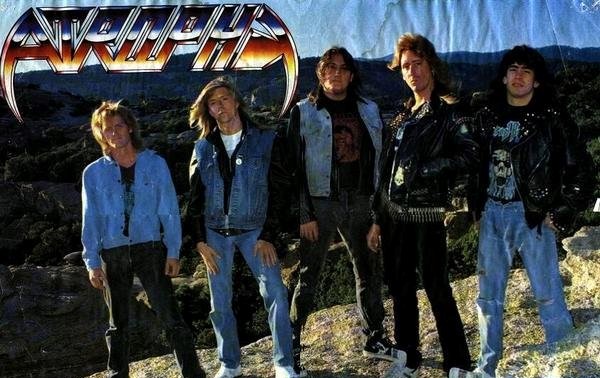 We find today’s subjects in the city sometimes referred to as “The Old Pueblo”, yet better known as Tucson, Arizona, where the band Heresy was formed in 1986, by Chris Lykins (guitar), James Gulotta (bass), and Brian Zimmerman (vocals).

Before a year passed, the trio was joined by Tim Kelly (drums) and Rick Skowron (guitar) and changed their name to ATROPHY. Things happened in rapid succession for the band, as they independently issued their first cassette demo that same year, 1987’s six-song ‘Chemical Dependency‘. This was followed by another demo in 1988, the three-song ‘Advanced Promo‘. Together, these two recorded offerings led to a signing deal with Roadrunner Records.

Truth is, it was a very good time for heavy metal in the late Eighties, particularly the explosion of the thrash metal genre. Bands like Testament, Slayer, Sacred Reich, Overkill, Dark Angel, and countless others marched their advance with now-monumental album releases. However, before 1988 was over, ATROPHY was included on two more releases: The first one a split with the progressive metal band Realm where the ‘Advanced Promo‘ was partnered with Realm’s own demo, ‘Final Solution‘, and released as the simply titled ‘Advanced Promo / Final Solution‘.

The second item was a compilation from Chain Reaction Records, ‘Metal Forces Presents… Demolition – Scream Your Brains Out‘. ATROPHY was one of five bands featured who each contributed two songs to the compilation, which also includes Anacrusis, Aftermath, Hobbs Angel Of Death, and Leviathan. In just two years time since their formation, ATROPHY grew in popularity and was well on their way to becoming an established act.

That was assured when ATROPHY made 1988 their banner year with the release of their full-length, début album, ‘Socialized Hate‘. The Bill Metoyer co-produced, engineered, and mixed 10-track album was a damning indictment of socio-political issues set to a scathing metallic music assault. It is one derived from incredibly frenzied discharges of speed metal and thrash laden with fiery guitars and intricate-yet-intense drumming. This was all topped with an aggressive, venomously vitriolic vocal delivery, which at the time was second only to Megadeth’s Dave Mustaine.

This winning formula was repeated nearly step by step, with all of the exact people components, for the band’s sophomore album, ‘Violent By Nature‘. Released in 1990, this second wave onslaught from ATROPHY revealed a maturing in their songwriting and execution. The album’s arrival was followed by tours of the U.S. and Europe with the likes of Sacred Reich, Coroner, and Forced Entry, but founding guitarist Chris Lykins left the band shortly after to go to medical school.

There’s an interesting fact about the ‘Violent By Nature‘ artwork, which features a skull-mask-clad child. The model for the artwork was a four-year-old Richie Bujinowski, who later became Max Cavalera’s adopted stepson and is now known as Richie Cavalera, the frontman of the metal band Incite.

After one of its leading songwriters was gone, Roadrunner Records’ support for ATROPHY gradually waned and the band was eventually dropped. The remaining members attempted to continue the band during the early Nineties, with plans to record a third album. Unfortunately, these pursuits would never come to fruition at that point and by 1993, ATROPHY had broken up.

In 1999, Rick Skowron, Tim Kelly, and James Gulotta resurrected ATROPHY with a new vocalist and played some reunion shows in their home state of Arizona. This version of the band later changed its name to Head Circus and began to write and record material, yet ATROPHY refused to stay dead. Tim Kelly, James Gulotta, and Brian Zimmerman reformed the band again in 2015, with guitarists Casper Garret and Rich Olsen, and had begun working on the long-awaited third album.

Since 2016, ATROPHY has played shows across North America (including The Maryland Deathfest 2016), South America, and Asia. Along the way, new members joined the band, including bassist Scott Heller and guitarists Bobby Stein and Denny Seefieldt. The last European appearance for the now-iconic act was at 2017’s Keep It True festival, yet this will soon change as ATROPHY recently updated fans with imminent touring plans.

ATROPHY recently announced their “30 Years Violent By Nature” European Tour 2020, in honor of the band’s 1990 sophomore album release. Their first European trek in nearly three decades will be supported by Israeli thrashers Black Sachbak. All confirmed dates at this time are listed below, with others expected to be announced soon.