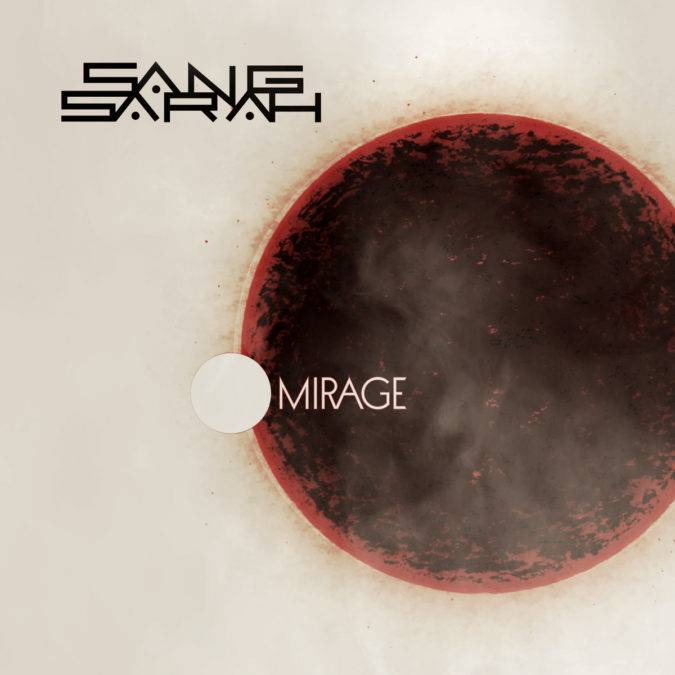 Let’s dive right into the thick of things ears first, for one of the most promising bands of those based in the beautiful Great Smoky Mountains has returned.

Yes, indeed I am speaking about Asheville, North Carolina’s SANG SARAH, and their recently released 6-song ‘Mirage‘ EP. Now, if you are a recurring regular to Riff Relevant then chances are you may have previously encountered some sort of SANG SARAH mention. It was around this time two years ago that we constructed a review [HERE] of the trio’s previous studio production, ‘Dismantle‘, in February 2018.

Living within the same multi-state meeting point as SANG SARAH, the convergent nexus of North Carolina, Tennessee, and Virginia, I’ve known of the band for a bit. Founded by wedded musicians Jenna (vocals) and Ian Duvall (guitars, bass, synths), I have had the pleasure of seeing them perform live several times. Those fine experiences have provided the firsthand witnessing of their musical evolution, and ‘Mirage’ – their first recording with new drummer Springs Wade – is a leap the equivalent of light-years.

Let it be known that while a “mirage” is an optical phenomenon, something illusory, this ‘Mirage‘ is an extraordinary auditory experience. If you are still not quite certain of these implications, some answers and an example arrive in the opening visitation, “Indents Of Dice“. Sure, SANG SARAH, has long possessed nuances of psychedelia, but those have gradually bloomed… and here we are.

This nearly three and a half-minute track will envelop you as a lysergic ladder of layered vocals and a synth accompaniment set the mood. All the while, an ominous vibe begins to swirl about, and yes, indeed, something this way wicked comes. Said to be “Leading The Witness“, we are immediately served one of the strongest tracks here, laden with the signatures of SANG SARAH. Infectious riff, thick rhythmic foundation, impressive fretwork, and of course, the not-so-secret weapon that is Jenna’s vocal abilities.

The woman is a belter with a ballistic bluesiness most times, while Ian is a wizard of sonic alchemy. Why? For he is able to craft the vehicle by which Jenna’s strong suit travels and this time it is picking up speed via “Desolate Mirage“. Advancing and gaining momentum enough to break into a fast musical gallop, this velvet locomotive pushes on. Don’t jump out of your skin when the throat searing, shriek-ish scream along the way sounds like bloody murder occurring.

I maybe should have warned you earlier on, but allow me to save you some trouble by suggesting you don’t try pigeonholing this band. About the time you begin believing you’ve figured things out, well you had better think again. The jazzy, speakeasy feel of the earliest passages in “Fall Behind“, how they break away into some atmospheric intensity, renders any incessant need to label as folly. This point is driven home with the latter half of this song, with classic rock moments ala Heart, others Spanish Flamenco influenced, others still yet feel improv-ish.

Bring on the doom… and they do with the slow churning dirge, “Meanderer“. Downtuned and deliberate like a blunt force impact, monstrous moments seem to threaten. That is until we get to the detour, there, we are turned toward some territory a bit more Pink Floydian. Eventually, the sorrowful transmissions of “Silver Screen Suicide” will somberly stop us in our tracks. Haunting and full of implied regret, this album ends with a much different feel than how it began, this is for certain.

The Duvalls, and friend Springs, have done it once again and in the process, SANG SARAH reinvent their overall sound and being. To think of them as an agent of one or two limiting genres at best is an outright mistake, one that says more about the person making it than it ever could them. But, then again, isn’t this sort of what a mirage really is? Something is convincingly seen that is actually not what it seems to be at all?

That is as fitting a summary for this recording, as well, made even more valid if you happen to be familiar with SANG SARAH and previous output from them. If not, then I suggest you start with the ‘Mirage‘ EP and work your way back, a reverse engineering if you will, to the aforementioned ‘Dismantle‘ (2018) and its predecessor, 2015’s ‘Lips Of Atomic Explosion‘. All of these are available for streaming and purchase at the SANG SARAH Bandcamp page [HERE].