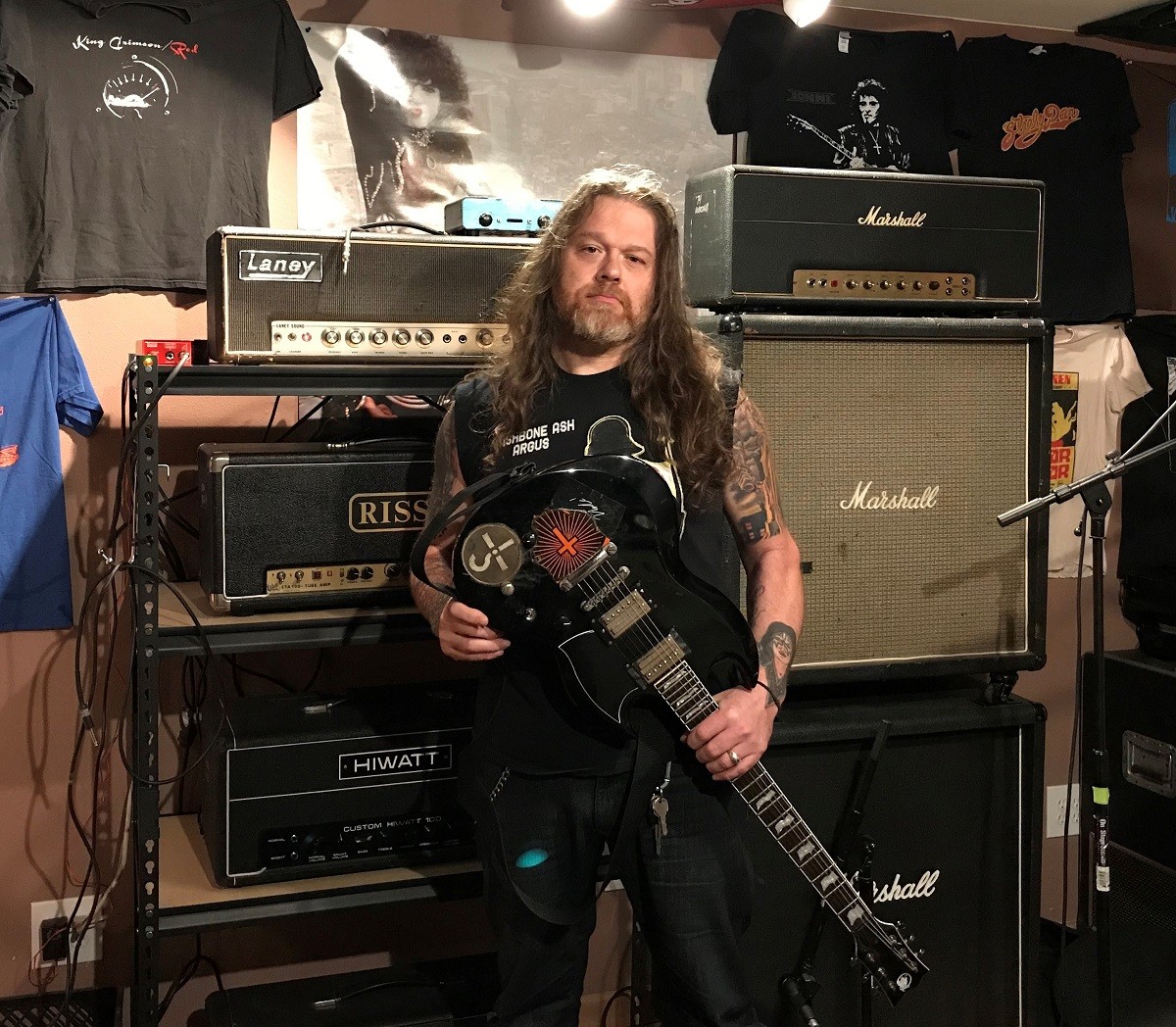 Each article in the Gear Assembly series features a different musician answering the same questions, highlighting both their varying preference in music gear, as well as their own music that results from using that gear. Hopefully, it brings awareness to both the artists and their gear makers. You’re reading, so we’ve got at least one more. Find new music, learn about who’s making it and what they use to create it…

When I started this up, I wasn’t sure which musicians (if any) would be interested in doing this series. The interview questionnaire form was posted on the Riff Relevant Facebook page and I went about my business. Color me surprised when we not only received the first email within an hour or two but was completely thrilled that it turned out to be from Tony Reed of MOS GENERATOR. What a way to start a series!

Anyone who knows me has likely heard me playing music from one of Mr. Reed’s bands. Aside from MOS GENERATOR, at any given moment he’s got two or three others going (Twelve-Thirty Dreamtime, Stone Axe, and Hot Spring Water, off the top of my head). He’s also part of the heavyweight ensemble Big Scenic Nowhere.

After knowing Tony for a few years, you realize he’s always down for a good music chat, especially about records or gear. That didn’t quell the excitement to find that email and realize he would be the first piece in the Gear Assembly! Rock on…

Riff Relevant [Leanne]:  What instrument(s) do you play?

Riff Relevant [Leanne]:  Give us a rundown of your current live gear set-up.

Amp: Rola Lead 100HW.
Cab: Marshall 1960B with 75-watt Celestions.
Direct, no pedals!
ESP LTD Viper 400 with Guild HB-1 pickups (guitar also has my secondary volume mod that is in most of my guitars).
Furman Power Factor Pro power conditioner (sometimes used with a Variac to get the voltage where I like it).

I’m not sure of the exact moment because I was probably too young to remember. I can remember always being moved by music. I got my first guitar when I was 12 and probably not before, because my family couldn’t afford it.

The big three were and still are, Ace Frehley, Tony Iommi, and Alex Lifeson. Over the years, many influences have rounded out my guitar style, but those three are what I hear most in my playing.

On first thought, I think it would have to be “Shadowlands“. It’s not horribly difficult, but it moves seamlessly through the changes and has a ton of dynamics. The guitar tone is awesome on the recording as well, so that is a joy.

I think Shadowlands is as close to the perfect Mos Generator song as I have achieved in 20 years. If I break it down into more detail, that thought is also influenced by the production and performance of all the players. It’s one of the only songs on any of our records that sounds close to how I imagined it in my head.

My main studio amps are: – 1969 Laney Supergroup 60 – Rola Lead 100HW – 1980 Hiwatt DR103 – mid-70s Risson ETA-100
All of which I’ve done some touring with. I’ve blown the output transformers in all of the vintage amps. That probably comes from playing them on 10 and attenuating them down with a Hot Plate.

I have two nightly rituals.
1. When the band before us is playing, I hum and sing along to their changes to get my voice warmed up. If there is no green room, doing it this way is a must, but I also like to get a feel for the audience before we go on and this is a great way to do it.

2. About halfway through the scheduled set time of the band before us, I go to the most convenient place and play guitar for at least 10 minutes.

We don’t have setlists, so I guess you could say that helps keep it interesting. I’ll usually discuss the opener with the band right before we go on. We’ll do that and then “Lonely One Kenobi“, which is always second, and from there they will just wait for me to call them out.

It lets me tailor the setlist to what I think might get the crowd amped up. We also throw in a freeform section, if time permits, and that could last up to 15 minutes.

I think the main thing is the meshing of all kinds of styles. I’ve always been a musical sponge and I play in all kinds of different bands to fulfill my musical needs.

Over the last few Mos records, I’ve really started to bring in other styles on top of the heavy rock. It’s always been like that, but now I’m giving in to that concept and not being so worried about what the fans/public will think.

In 2018, I got an endorsement from a local (Seattle area) amp company called Rola. I already had endorsements from Hiwatt and Laney, but I really liked what Derek was building, and I like that they are a local company and I can have work done on it by just taking it to him.

I’ve been having a large majority of the guitarists that come through my studio [HeavyHead Recording Co.] use the Rola on tracks and the sounds have come out great! I get to have gear geek discussions after shows about it, too. I really enjoy that kind of stuff. I don’t have any signature gear yet, but I’ve been in talks with a few guitar builders about it.

My live setup is so simple and that is the way I like it. Less stuff to go faulty. If I had to choose one piece, it would be my LTD Viper 400. I’ve put that guitar through hell and it is still very reliable.

I’ve also had my mods done to it, so it’s hard for me to use a guitar that doesn’t have them. It’s really a part of how I control my sound on stage while I’m singing and trying to have gain and volume dynamics all at once.

My only real hobby is collecting records. Other than that I spend most of my days in the studio working with bands or on my own music.

They are not really newly emerging, but they are active and not on a superstar level. Bands like Once & Future Band, Motorpsycho, and Fleet Foxes are using what I love from the past to make music now that sounds like it was made back then.

Aside from knowing how to manipulate social media to your band’s benefit? Stay off social media and spend as much time as you can learning your instrument(s) of choice.

Learn how to record your own music and record every idea you come up with. Don’t be afraid to take in and learn any style of music that turns you on. That is how you learn songcraft.

Take it all in and it will get translated by you into something new and unique. I’ve written and recorded thousands of songs over the years and only a small percentage are what I consider more than “interesting” songs. – Oops… that’s way more than one piece of advice.

If these tours and festivals I have coming up get cancelled, I lose out on quite a bit of fun stage time, connection with the audience, and money that I have fronted for special merchandise. I’m staying positive, though.

Riff Relevant:  If you could have any music gear you wanted, what would be your ideal setup?

An EMS VCS3 synthesizer. Everything else is pretty well taken care of. I have a lot of gear. 🙂