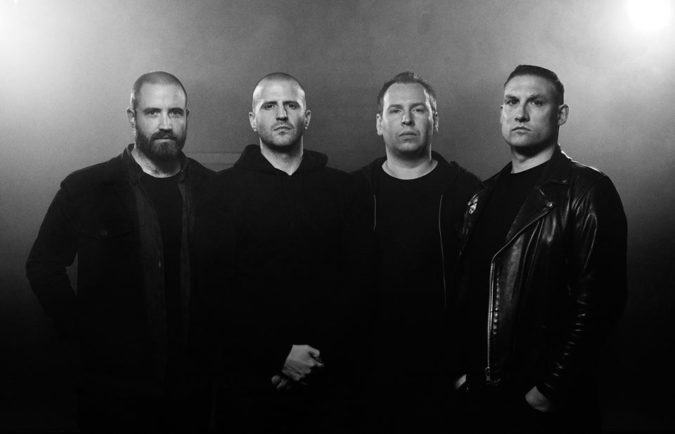 Much like the people espousing them to begin with, opinions and beliefs held by folks differ as much as daylight and darkness themselves do.

One man’s garbage is another man’s treasure and one man’s definition of “old school” is most certainly not every man’s definition of the term. I won’t even begin to address all the numerous takes on what is or what is not old school, who is and who isn’t. Instead, let’s just get started with the geographic location of Manchester, England, circa 2004.

This was ground zero, the home of the then newly formed band ATAVIST, comprised of quartet Toby Bradshaw (vocals), Shane Ryan (bass), Chris Naughton (guitars), and Jamie Sykes (drums). Despite their not having released any official material at that point, they were tapped to open a series of shows for drone doom mystics Sunn O))). It was during this tour that ATAVIST recorded a one-song demo track, “31:38“, and the strength of the song helped land a recording deal with Invada Records (founded by Portishead’s Geoffrey Paul Barrow).

With label support and promotion now backing them, ATAVIST recorded their self-titled introduction and it was released in 2005. The line-up of the band was the same from the earlier demo, except for the drummer slot, as Sykes had been replaced by Callum Cox. As equally important as who was on the recording is WHAT was on the album; its contents, the music itself. Meshing together a blend of battering hardcore-infused sludge with multiple styles of doom, ala drone and funeral, the music was most abrasive. There were definitive nuances of psychedelia, ambient, and atmospheric-oriented sonics inserted for good measure. To top it off, the vocals were also varied, ranging from death metal type guttural ones to a more shriek-like black metal delivery.

This was followed by the full-on foray into their experimental leanings, as ATAVIST then collaborated with Canadian ambient outersound duo Nadja. This resulted in the nearly hour-long, two-track exploration of otherworldly audio known as ‘12012291920 / 1414101‘.

The band’s sophomore full-length arrived in 2007, ‘II: Ruined‘, which seemed to find ATAVIST only doubling down on everything making them… well, them. Increased aggression, elevated psychedelia, enhanced doom and despair all accounted for and it’s was a good thing, too. The recording was released in the U.K. and Europe through Invada Records once again, but in the U.S., Profound Lore handled release and distribution. There are slight differences between the two, including different artwork, as the Invada version was in a jewel-case format. The Profound Lore version was a digipak CD with a tracklist that contained a cover of Grief’s “I Hate The Human Race” not found on the U.K. version.

In 2008, ATAVIST returned with the Rise Above Records two-song, 10″ vinyl EP  ‘Alchemic Resurrection‘. There was a digital release of the EP, as well, one with two added bonus cover songs, “House Anxiety” from Iron Monkey, and “Mindless” from Infest. There was a second collaboration with Nadja that came the same year, ‘II: Points At Infinity‘ (Profound Lore), as well as a three-way split with both, alongside Satori titled ‘Infernal Procession… And Then Everything Dies‘ (Cold Spring Records).

Somewhere around the time of the recording sessions for the split releases, ATAVIST went through some changes in its membership. These began with the departure of bassist and founding member Shane Ryan, replaced by ex-Narcosis member Oliver Turner, while drummer Simon Lucas and second guitarist Richard Brass also joined. Having now broken into the U.S. market, recognition of and interest in ATAVIST was growing at home in the U.K. and elsewhere, so the lads knew what they must do to capitalize on this…

Go on indefinite hiatus! I am being sarcastic, of course, but it is no less truthful, as ATAVIST did exactly that near the end of the 2000s. The guys went on to play in other bands over the years, including Winterfylleth, Nine Covens, Pine Barrens, and Satanic Dystopia, and, thankfully, indefinite does not mean forever.

2017 saw the long-awaited return of ATAVIST after nearly a decade’s absence, Toby Bradshaw, Chris Naughton, Shane Ryan, and Callum Cox began to create the next chapter of their story. It continues with their recent signing to Candlelight Records and coinciding with it, ATAVIST announced the release of their new full-length offering, ‘III: Absolution‘. Their third full-length studio album is set to arrive June 19,  2020, and promises to triumphantly pick up where their last left off some 13 years ago. This is evidenced by “Self-Realisation“, the first single recently premiered from the album and included below with the album artwork and tracklist.

Enjoy the return of truly catastrophic sludgeoned doom like no other!