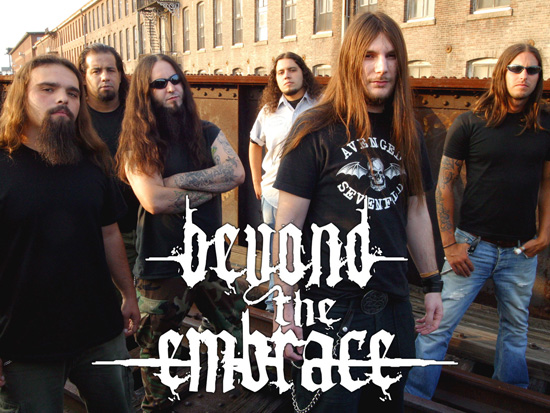 It was the start of the new millennium and, as it often does in cycles of every decade and a half or so, there were changes taking place in underground and mainstream music.

Grunge had begun to run its course and was on the way out, while in its place, nu-metal had a foothold established and each new day seemed to bring new bands with it. Another style was also becoming more prevalent, as bands like Shadows Fall, Killswitch Engage, Still Remains, or Every Time I Die were resonating with the more youthful metal fans.

Just an hour south of Boston, Massachusetts – the home state of Shadows Fall and Killswitch Engage – is the city of New Bedford. This is where, circa 2000, a group of musicians had assembled themselves beneath the banner of BEYOND THE EMBRACE. The band consisted of six members – Shawn Gallagher (vocals, keys), Mike Bresciani (drums), Adam Gonsalves (bass), and in a rather unusual dynamic, three guitarists with Jeff Saude, Oscar Gouveia, and Alex Botelho. Though the band will ultimately be tagged with the metalcore designation, the truth is they played melodic thrash with progressive metal elements and moments of death metal.

One can hear the clearly defined influence from the New Wave Of British Heavy Metal upon the band, too, especially in the trio of guitarists. In 2000 and 2001, BEYOND THE EMBRACE recorded and released two demos, one each year with the three-song ‘Demo 2000‘ and a 9-song eponymous effort the following year. One or both of these did its intended purpose, drawing interest in the band from a label, Metal Blade Records, who signed them in 2001.

In June that same year, BEYOND THE EMBRACE entered Euphoria Sound Studios, and with producer Aaron Clay, they recorded and co-produced their first official album. Titled ‘Against The Elements‘, the 10-song record is a powerhouse of capable, tight-knit playing and way above average technicality. The music is fluid and encompasses a variety of styles, ones wide in scope and covering a multitude of genres. The vocals possess a broad range, as well; at times aggressive to the point of guttural, while others are clean and easy to absorb. When taken in as a whole, the music on this introduction to BEYOND THE EMBRACE does not fail to astound… made more impressive by the fact the band members were all in their early twenties.

With a solid album in hand and the label backing them, BEYOND THE EMBRACE were soon supporting established bands like Opeth, Helloween, and Lacuna Coil. They did so with a new drummer, Kevin Camille, who replaced Mike Bresciani after the debut was released. The critical reception for ‘Against The Elements‘ was overwhelmingly positive, while the band was growing in popularity with fans. In late 2003, BEYOND THE EMBRACE entered System Recordings in Ipswich, Massachusetts with producer Ken Susi, the guitarist from another Boston band, Unearth.

This was not the same inexperienced young men from the previous record, no. They were now road-tested, more mature, and confident. Ken Susi had a big hand in helping the band flesh out their new batch of songs, he gave suggestions and would drive them to find a sound and identity all their own. When BEYOND THE EMBRACE completed recording their sophomore album in February of 2004, they then recruited new bassist Chris Parlon into the fold. Three months later, they issued said album, the astounding ten track ‘Insect Song‘, once again through Metal Blade.

The album was a smash with critics, a remarkable evolutionary leap for BEYOND THE EMBRACE that lead to tours with Prong and others. It was their tour with Prong that afforded me the shot to see them in Huntington, West Virginia and they were quite fantastic. In 2005, drummer Kevin Camille left and was replaced by Steve Bolognese, who in turn was replaced by Chris Haskell in 2007.

Despite the immense acclaim for BEYOND THE EMBRACE and their two studio albums, they never seemed to capitalize on it. Things gradually waned for the band and they never recorded any further material. They officially disbanded in 2011.