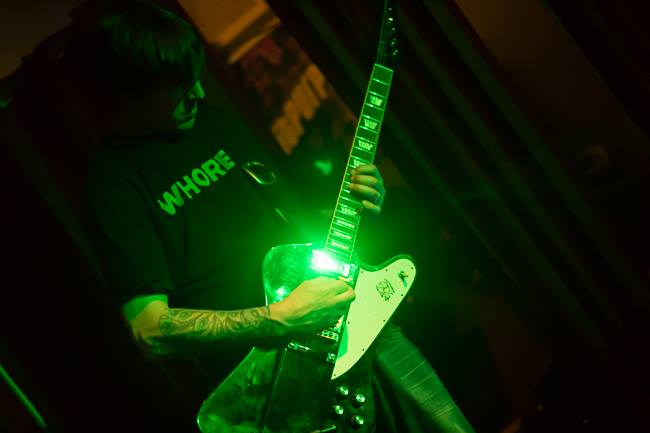 THE AGE OF TRUTH’s Michael DiDonato

Philadelphia, Pennsylvania – the city of brotherly angst. Their native sons tend to have a “Hey, I’m From Philly” invisible chest badge, with or without realizing it. The Philly foursome of THE AGE OF TRUTH certainly doesn’t shy away from anyone, for any reason. Honestly, they’re maniacs.

Their guitarist, Mike DiDonato, is a true gent. Also, complete maniac. In all of the best of ways, though – a knightly maniac, if you will. Mike D is also a soulful, committed guitar player. He delves deep into his own world as he’s on stage, but offstage you’ll find him possessing a genuinely kind heart and enough humility that he usually forgets just how good he really is. MIKE D IS AWESOME. Period.

It’s a joy to have him be the third piece in the Gear Assembly! Rock on…

I realized, in 1988, that I needed to learn how to play guitar. Guitar players like Jimi Hendrix, Jimmy Page, Jerry Garcia, Grant Green.

Mostly Hendrix, though. What a monster on guitar and to this day it’s my opinion that he is still the greatest guitar player that ever lived.

Not sure. If I had a gun to my head, I’d say “Caroline“, off of our first album ‘Threshold‘ [review]- especially our live performance of that song.

I’m a blues guitar player at heart, but have always loved the heaviness. Trying to bring the two genres together during a song writing process just makes sense to me. It’s, in my opinion, the greatest hybrid of music.

The studio is a very different animal compared to a live performance.

With The Age Of Truth, and me being the only guitar player, we try to keep our studio recordings as true to a live performance as possible. Not having a second guitar player limits what you can do, but I embrace that challenge.

That said though, it’s an album, so you have to push certain boundaries to make the album as colorful as possible, without exceeding your live performance capabilities. It’s a tough line to toe. For an album’s sake, you have to cross those boundaries, but be smart about it and don’t overdo it… less is more.

It never hurts to try different amps/ pedals/ cabs/ guitars to capture a different sound for an album.

My pre-show practice is as follows:

Rehearse as much as possible leading up to the gig to prevent as many mistakes as possible.

Handle your shit! Meaning, we’re all adults in this band, we have about 35-40 minutes to play a killer set. Don’t kill the set by getting completely shitcanned before you go on. Try to keep the party, or at least some of it, for after the set.

You never know who is recording you on social media anymore. If you party too much before your set, someone is bound to record it on their phone capturing how awful you were that night.

With our band, we’ve developed parts of songs that turn into a jam or a tripped out part, where we can kind of improvise and have fun with our songs. People that see us live have said, “wow that was nothing like the record, but it was awesome!”

This is because we’ve had time to develop on stage and pick parts out to elaborate on and show our musicianship. This came through playing live and being more and more comfortable playing on stage and just getting used to each other’s styles musically.

Orange Amps. Gibson guitars. And let’s be honest…  Tone, in my opinion, comes within a players hands. Their touch on their instrument, how they hold/ strum/ pick, etc. Developing your tone takes a lifetime. Truth.

D’addario strings. I’ve been playing them since I started playing back in 1988. Gibson guitars. Orange amplifiers.

Becoming an Orange Ambassador is a dream of mine, or a D’addario sponsorship would be amazing.

Gotta be my Orange Amps. I just know when I plug into an Orange amp that I’ll get what I’m looking for in an amplifier.

It’s hard enough getting on stage to perform, but when you turn around and see that you’re plugged into an Orange, and you hear and feel the warmth and beautiful tone from such a product, a calm falls upon you… and you know everything is gonna be okay.

My work. I work in construction and just getting your hands dirty, swinging a hammer or smashing a wall with a sledge hammer helps tremendously with creating riffs and songs.

Being a blue collar worker, period, helps. Working hard, physically, every day makes picking up the guitar to write a riff or song easier. The feel and emotion you put into writing music after your body takes a beating during the daily grind, it can only shine through in a positive and inspiring way on your artistic side.

The influences are hard to keep up with. There’s so many bands out there that it’s very difficult to keep up with. So many “great” bands is what I should say. I have my favorites, but I’m always trying to keep my thumb on the pulse.

Don’t ever stop. It’s a life long learning experience on any instrument. Keep pushing and don’t give up.

If I never learned how to play guitar, I don’t know where I’d be in this life. Best choice I’ve ever made in life was to take the time to learn how to play the guitar. Truth!

It’s been awful. Gigs are all canceled. We’re in the middle of recording our second album. The recording process takes long enough and with this virus, yeah, it’s really slowing things down for us. Our recording sessions have all been canceled. It’s gonna get worse before it gets better.

I’ve just been trying to stay home and stay healthy. It’s all you can do right now. Hopefully things clear up and we can get this new album out and start playing shows again. But our health is the most important thing now, so I’m just trying to stay safe.

THE AGE OF TRUTH