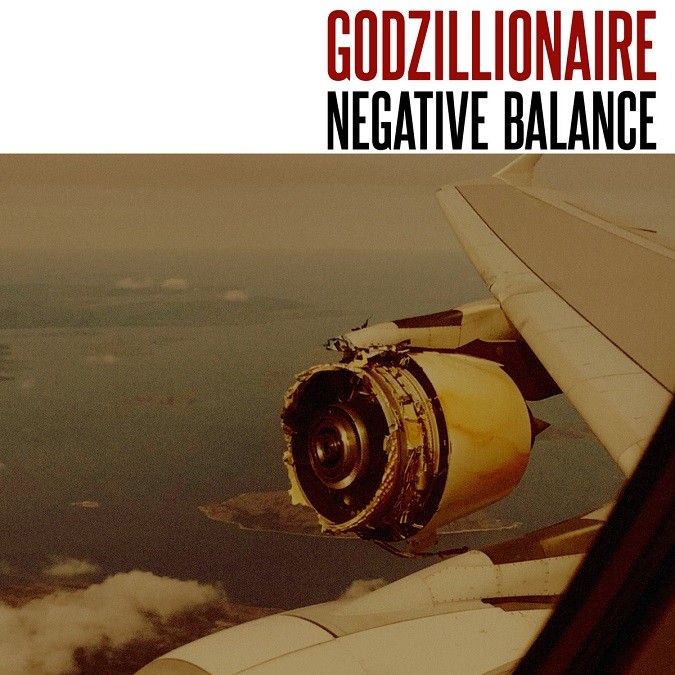 GODZILLIONAIRE is a Lawrence, Kansas band that many may not yet be familiar with. You should be and you will be if I have anything to say about it. Their latest album ‘Negative Balance‘ is the aural sanctuary I’ve been waiting 20 years for someone to build, although I was unaware of my need for it until I listened to it. After repeated listening, I find myself entranced and compelled.

Released April 3rd, 2020, ‘Negative Balance‘ in full is a 14 song, 54-minute love story. What that love means is up for interpretation, but it is nearly an hour of enchantingly heavy and light moments blended into thoroughly encompassing storytelling. As told with the mind-wrenching smoothness of a truly turbulent heart, there is a genre-blending display of love for earth, wind, water, and creatures human or otherwise, rendered with enough fire to set them all ablaze and erase any assumptions you could make about this album. GODZILLIONAIRE is “Kansas as fuck”. For my own interpretation, I firmly agree with them.

Allow me to backtrack… some 20 years ago I moved cross-country on a solo road trip (NY to CA), with 52 hours of driving done in 2.5 days. This adventurous life move was exhilarating on its own, but there is indeed a reason for my telling it. Certain aspects of that trek are vivid and forever burned into my memory as transformative.

At the tail end of a 17-hour driving stint, my pinnacle of awakeness was reached. My speeding along the highway after what seemed like an Oz level of poppy-field eternity, through endless miles of swaying sunflowers stretched across flat fields to both North and South horizon lines, something stopped my lead foot in Lawrence, Kansas. Yet, those mind-dazing sunflowers will never die for me. A dry world with wide-open sky governing not-so-subtle grunge masked by a deafening golden distraction, vaguely threatening in its oddly mystifying beauty. Kansas as fuck.

There may be a familiar vocal tone to the GODZILLIONAIRE storytelling in ‘Negative Balance‘, as well as their prior releases (2017’s ‘the great dEPression‘ and 2018’s ‘Small Change‘), as it is Mark Hennessy who croons and howls into your ears. Mark is formerly (and occasionally still) vocalist and poet of PAW, one of my favorite bands to have ever existed. However, my bias is hereby relaxed, as while born from the same landscape, GODZILLIONAIRE most certainly is a different monster.

With Mr. Hennessy in the primary vocals and wordsmithing role, the band rounds out with Michael Dye on bass/low synth, Cody Romaine on drums and percussion, and Ben White on guitar and keyboards. Starting off with a recorded phone message, the introduction to ‘Negative Balance‘ is already setting the tone for a brewing storm before leading into the musical start with the album theme “Exit The Succubus / Bankrupt, Naked, & Void.” A slow, smooth grooving rhythm keeps hold over the first couple of tense verses and choruses until it explodes with an abundance of tone and heat.

“The Solution Is Laughable” is a churning rocker with steady waves of ironic despondency amidst a crushing low-end resonance. Track four, “Ballad Of The Topeka Gentleman“, may be my top repeater thus far (video below). It’s a barnburner full of head swaying rage blasting out from every direction, with vocals both wailing and nearly whispered, guitar ripping in sync with the ever-seething drums and bass. This is one that causes that sudden realization halfway through the song that your eyes have rolled back in your head and you’re just moving in time to it, smiling all the while. These gents write some mentally ravishing songs. Goddamn.

‘Negative Balance‘ isn’t simply a heavy rock or nostalgic nod of grunge rock, nor is it possible to lump it into one or two categories. It hits the mark there, for sure, but once you think you’re locked into a box, they pull a lever and give you a soothing ballad-esque moment, or a doomed out disengagement from reality to throw your metalhead out the window, then toss in a southern lullaby before sneaking off with an alt-rock kick in the teeth.

But wait, there’s fucking more… Kansas dirty sweet, but not quite desert rock climbing, building up to some of the sexiest psalms this side of an abandoned, deconsecrated church. Then let’s augment this opus with a bafflingly beautiful piano motif leading the “Exit Aisle Reprise” to melodically liberate your brain from your skull.

“At least that’s what it means to me.”

There are several ways to buy ‘Negative Balance‘ through the band’s website for CDs, plus various outlets for digital download and streaming, like Bandcamp, iTunes, Amazon, and Spotify. They also have various singles on video through YouTube, two of which – “Ballad Of The Topeka Gentleman” and “64 Palms” – are streaming below.

I’m personally hoping for a future vinyl record option, so someone somewhere needs to set up a vinyl pressing and distribution with this band, or I might just be forced to start a damned label and do it myself.

The hope for vinyl is now here! The band has started a crowdfunding campaign to get ‘Negative Balance‘ pressed on a double LP, heavyweight vinyl record. You can further their cause by backing the campaign and preordering a record.