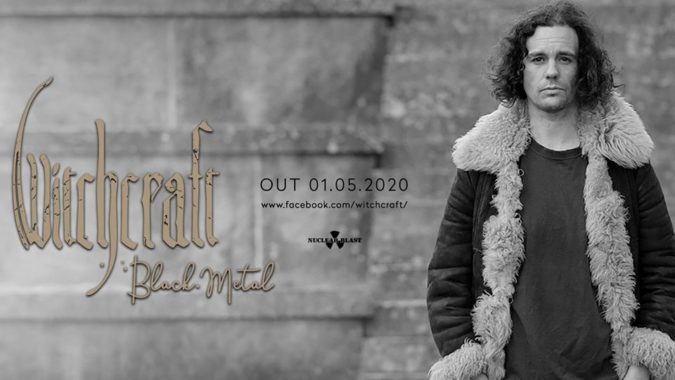 The following announcement relating to Swedish proto-doom / occult rock act WITCHCRAFT is sure to come as great news to dedicated fans of the band.

Truth is, “band” may no longer be an appropriate designation for the musical entity from mastermind and founder, Magnus Pelander. For the first time in WITCHCRAFT history, Pelander has set forth alone. In doing so, he has taken the beloved project into new territory. It is one that finds WITCHCRAFT exploring and embracing a way of augmenting its music in a most powerful way.

This will be on display when the first new record in four years, the all-acoustic ‘Black Metal‘, arrives May 1st from Nuclear Blast. The overall timing of this offering could not be better, as WITCHCRAFT, first formed in 2000, and recognize their 20th anniversary this year. Initially realized as the means for Magnus to record a tribute to his idols Roky Erickson and Bobby Liebling (Pentagram), WITCHCRAFT took on a life all its own. Two decades later,  five studio albums and several EPs, splits, and singles exist in the music realm, testifying to the pioneering greatness of WITCHCRAFT.

The reverence shown to WITCHCRAFT by Philip Anselmo (Pantera, DOWN, Scour), Ghost’s Tobias Forge, and countless other artists speaks volumes about their far-reaching influence. With a genre-defiant style blending doom and vintage rock, melded with flourishes of psych-tinged ambient elements, this is one act that is unquestionably second to none.

With the upcoming acoustic album ‘Black Metal‘, WITCHCRAFT‘s thus far illustrious career steps into an entirely new light. Let it shine for all to see as we share the first two audio singles, “Elegantly Expressed Depression” and “A Boy And A Girl”, streaming here today.

‘Black Metal‘ from WITCHCRAFT will be available on CD, Vinyl, and Digital formats on May 1st from Nuclear Blast. Pre-order yours now at this [LINK].