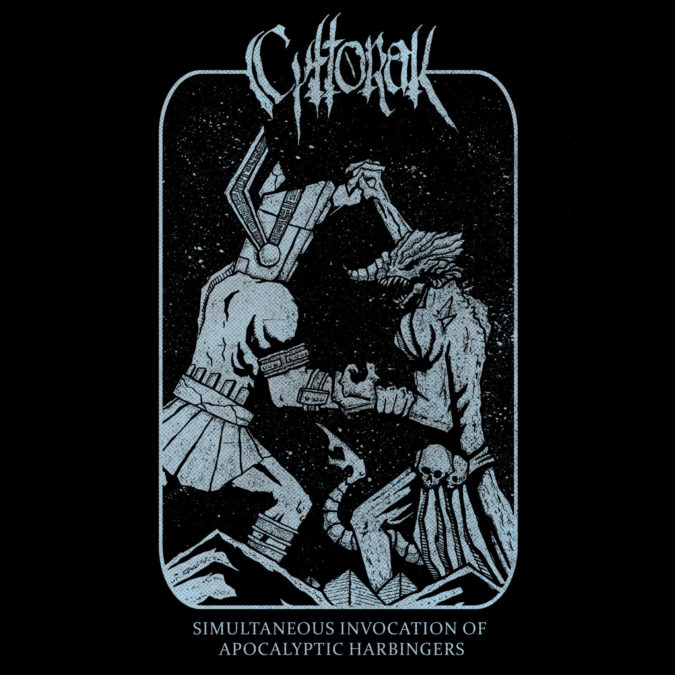 Providence, Rhode Island-based ‘slowerviolence’ act CYTTORAK has announced a new EP coming, with the mouthful of a title of ‘Simultaneous Invocation of Apocalyptic Harbingers’. Today we have a premiere of their first single off that EP, “Planets Between His Teeth“.

If you wish for your powerviolence to loosen up a few notches towards lethargy, or your sludge to be a few caverns deeper, this is probably soon to be your crusty new tar stick to mix the grind.

With cover art done by Unexpected Specter and logo by Josh Yelle, the EP was recorded and mixed by Will Killingsworth (Orchid, Ampere, Corrode) at Dead Air Studios. CYTTORAK adds another level of sonic destruction with the addition of guitarist Eric Saylor (ex-Landmine Marathon) for this release. Prepare for a new era of crushing annihilation. Hail the Daedra and die.

Some insight on the new song comes from Rich, bassist of CYTTORAK:

“‘Planets Between His Teeth’ is about Galactus, The Devourer of Worlds. Cracks in the Earth’s crust form from the thunderous bass and are swept into the cosmos by off-kilter Man Is The Bastard-esque jazzviolence.

In its original incarnation, this song was under a minute long and followed more of a standard powerviolence format. That carcass of noise has since been unearthed and built into a conduit for the Power Cosmic as befits The Lifebringer.”

‘Simultaneous Invocation of Apocalyptic Harbingers‘ will be coming out May 1st via Tor Johnson Records. The new EP is available for preorder of digital download and Cassette through Bandcamp and the label’s webstore. Below the track premiere, also have a listen to their first EP from May 2019.

‘Simultaneous Invocation of Apocalyptic Harbingers‘ is available for cassette pre-order through Tor Johnson Records, or via Bandcamp below. They have a current deal going: each order will come in a screen-printed dice bag and include a D20 dice, along with character sheets for two mega-powerful creatures (hint, check out the cover art…).