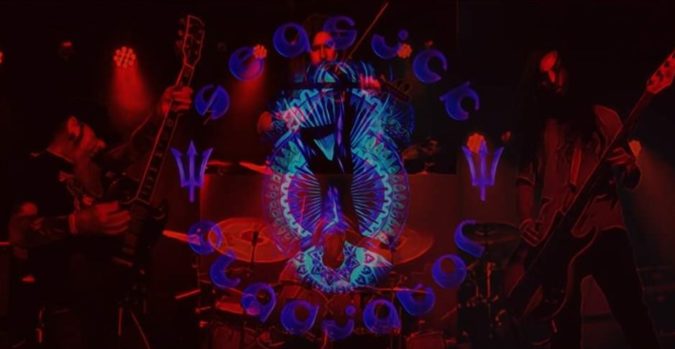 Look, let’s not beat around the bush; fine, I’ll say it: If you are going to be an instrumental band, especially in this day and age, you damn sure better have something special going on.

I say this due to a variety of reasons and observations, which begin with an inordinate horde of whining butt-hurts claiming to be unable to relate to vocal-less music. If you are one of these people, well, I am going to go out on a limb here. If it breaks beneath me then so be it, but I’d wager that you have never heard Washington, D.C.’s SEASICK GLADIATOR … am I right?

Even more so, I totally get it, as a case could be made that I was once somewhat like you, or you are now as I once was. I halfheartedly, incorrectly assumed a band had to have a vocalist. In time, I was made to consume crow about that foolish notion. Several sonic units helped feed me that meal, too; ones like Pelican, Red Sparrowes, Dysrhythmia, Stinking Lizaveta, and Liquid Tension Experiment – though really none more so than Karma To Burn. After seeing them live in the late Nineties, my eyes were truly opened, as were my ears. I had been enlightened and awakened to something I’d been missing out on.

Another band greatly contributed to this evolutionary intellectual leap for me; this one right here, SEASICK GLADIATOR. Seeing them perform live at The Maryland Doom Festival 2016 was a powerful, reverberating reality check. Not to mention, I don’t think they even had an official release out at the time, but it didn’t matter.

What does matter is real-time, the here and the right now, up-to-the-minute moments where SEASICK GLADIATOR have just this week released their second studio album, ‘The Hanged Man‘. The current incarnation of the band is comprised of guitarist Chris Rasley, violinist Patrick Geddes, drummer Nathaniel Simms, and bassist Zak Suleri. Yes, a violinist… what of it?

If I may answer my own query, the reply is short and to the point: A lot! One of the great strengths of SEASICK GLADIATOR is its ability to evoke an emotional response within listeners. Really now, to be fair, isn’t that the desired outcome of any good music or artistry, for good or bad? Luckily, here it is all the first and none of the latter, for “The Sea Will Tell” rolls in upon the tide. Subtle, even somewhat tenuous, this music makes it easy to imagine a beach – any beach, anywhere, as seemingly aimless waves caress its coastline.

They are misleading, though, an eeriness lies just below the surface, and as the band engage more of the song, the dire straits we are in become clearer. With tumult and intensity increasing, the more tranquil moments of the song become less and less, for like the waves, there are ebb and flow. Things remain as such until midway through when the clearly defined musical equivalent of a riptide takes place and pulls us into an agitated sonic swirl. It is one we shall ultimately survive, at least for this selection, yet our physical state, and fate, have further trials ahead.

One of them is quickly upon us in the form of “House Of Aristippus“, a much darker, unsettling composition to be sure. Beginning with isolated bass lines, drums soon flare to life in accentuating bursts, as this dispatch of progressive doom metal gets underway. As for the song’s title, I imagine the learned recognize its apparent reference to Aristippus of Cyrene, a disciple of Socrates that founded the Cyrenaic School Of Philosophy. However, his philosophical outlook differed very much from Socrates’ own, as Aristippus believed a person should seek pleasures in life based on individual circumstances. His belief system came to be known as “ethical hedonism,” the idea that pleasure is the highest good for a person, but only when moderated by morality-based self-restraint.

Aristippus, well known for never breaking his unwavering calm demeanor, regardless of the situation or degree of debate, was shipwrecked on Greece’s island of Rhodes at one point. This keeps in line with the apparent aquatic-related narrative of this album, this track providing an imaginative, texturally varied soundtrack one might hear upon pondering the history of Aristippus.

As we submerge ever further into the depths of this record, one word repeatedly comes to the surface… ambitious. It is no easy feat to relay a tale or an idea by solely sonic methods, yet SEASICK GLADIATOR accomplishes this. The greatest example of this, perhaps, is the lengthy title track, the nearly half-hour-long “The Hanged Man“. If you are able to absorb this far-reaching composition’s profoundly deep layers and explore fully the dimensions of each, you will experience a gamut of mood-enriched intensities.

Much like events upon the seven seas themselves, there is a calm before the storm, almost a stillness. In due time, it shall dissipate in the face of an oncoming tempest of aggressive instrumentation and quickening paces. Some moments take on a very Space Rock-type state, a brine seasoned with psychedelic and classical elements. Juxtaposed to the longest song is the shortest and possibly heaviest number here, the all-out metal of “Persistence“. Crashing down like a tidal wave, this chaotic, frenzied serving is one with dizzying swirls first preceded by rumbling bass breakdowns.

When the quartet is fully engaged, there is a prevalent feeling of an almost improvised jam session; a fast and loose deluge, if you will. Our aquanauts upon dry land dial things into place once again for the final navigation made and the album-closing “Plague Mask” is a stand-out to be sure. The return of Suleri‘s separated, pulsing bass signals the beginning, soon joined by Rasley‘s effect altered guitar, Simms‘ hefty drumming, and the unique coup de grace, the violin of Geddes. For a fleeting moment, one hears a very Kyussian nod to desert rock, albeit briefly.

Taking on a more classically-tinged doom mode, the song ultimately provides impressive closure to this stellar album. Though before doing so, the irony of the song’s title in relation to current global events, is not lost on me and does provide cause for reflection. Mankind is currently in the throes of COVID-19’s pandemic plague and masks of the contemporary sort have been the center of focus at times. (I should mention that this is the instrumental version of this song, of course, and not the version released with guest vocalist Earl Walker Lundy of Shadow Witch found here.)

Pure coincidence, I know, but what is not such is this opus of creative scope, ‘The Hanged Man‘, from the talented crew of the SEASICK GLADIATOR. Powerful and evocative, its contents are a striking addition to the other works of new music arriving at this time. If rousing displays of classically enhanced, progressive doom metal are your thing, then this could easily be your thing, too. Find out now by streaming the album provided in this review or sail on over to the Bandcamp [HERE] of these ocean-faring men of hydro-borne heavy metal.