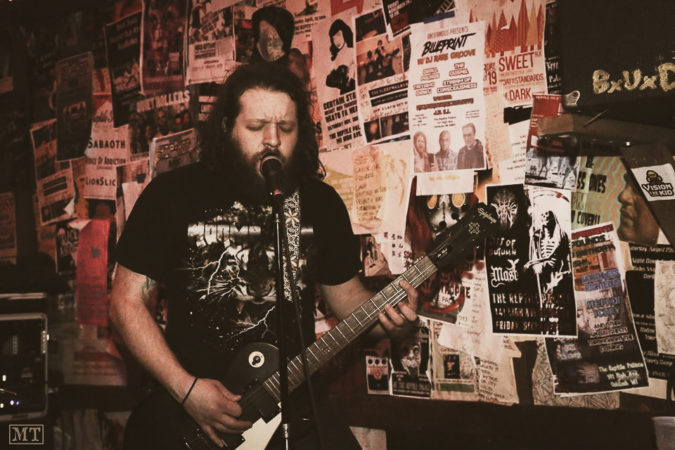 For any frequent readers of our site here, the name Taylor Waring may ring a bell or two. The guitarist and vocalist for the Spokane, Washington band MERLOCK is also one of our occasional review writers. You can take a gander at all his past reviews, if you’re so inclined. Some good stuff in there!

MERLOCK has a new album coming up later in 2020, it’s what may fit into the hexagonish circle of StonerPsychDoomAvantGaze. We’ll check out what else Taylor Waring is up to these days, as he’s here to be our seventh piece in the Gear Assembly! Rock on…

My current rig is a Matamp GT120 with an Avatar 4×12 loaded with Eminence Texas Heat Speakers.

I’ve always played Epiphone Les Pauls because I’ve always been broke. My main LP is a 2015 “Goth” model with Lace Finger Burners and my backup is an Epiphone Prophecy Custom with the stock EMG 81/85’s.

My pedal board starts off with the classic Crybaby and a tuner. For gain stages, I run a Pigtronix Philosopher’s Tone mini into an OCD Overdrive – the Philosopher’s tone is almost always on. From there, we go into a TC Electronic Corona, which usually stays on to thicken my tone.

After that I run a Boss Flanger (BF2) into a DOD Phaser (FX20 B). My coolest pedal is right after, it’s a prototype Tremelo that a local dude in Wisconsin built, called a “Run Rabbit Run”, built to worship Gilmore. I use the Phaser and Tremelo to make a lot of my weird noises live.

These are followed by Ibanez Echo Shifter and my new baby, an Old Blood Noise Endeavours Dark Star reverb. The delay is used for most of my solos and interludes – and almost every time I use a cleaner guitar signal. I’m still experimenting with the Dark Star, but it’s opening up a whole new world of possibilities.

For vocals, I keep a TC Electronic Helicon Mic Mechanic around, just in case.

I’d always wanted to be a singer and that’s the only thing I’ve done consistently in bands. I started taking it seriously around the time I started taking guitar seriously in college. I started out with a lot of singer / songwriter stuff (there’s definitely some Damien Rice covers out there).

My first major influence as a guitar player was probably Adam Jones, who made me really interested in the possible textures a guitar can create. There’s almost a visual element to what he’s doing. After that, I fell in love with Gilmore, like everyone else, when I started smoking pot and listening to ‘Dark Side of the Moon’. Then it all kind of came together when I discovered Thin Lizzy, around 24.

As a singer, I can’t really name a primary influence. One of the things that interests me most about singing is how much you can’t really sound like someone else – you’re just kinda stuck with this voice and gotta figure out how to use it. Because of that, I appreciate people with difficult voices they’ve managed to master – Neil Young, Asaf Avidan, folks like that.

I think [vessel], off of MERLOCK‘s upcoming album is pretty close to it. It’s a complicated song and it requires MERLOCK to fire on all cylinders to play it live.

As a poet / musician, you’re sort of always in this difficult position of knowing how hard it is to communicate anything at all, but I feel like I’m kind of close with that one.

Oh, man. Half the reason I do anything is so I can justify going to studio with a bunch of fun toys in it.

I really hope to have the privilege of taking the time to craft each and every sound on an album. I can’t say there’s anything specific I have in mind – I’m always open to exploration.

I’ve had a few over the years. For a while, it was a shot of gin with the band before we go on stage.

Usually, I just smoke a bowl and do my Melissa Cross exercises (maybe that’s counterproductive).

If you wanna look at the world very materialistically, we’re just input / output machines. Everything that’s put into your head, from your life experiences to your favorite records, is rearranged and expressed. I think that’s part of the difficulty of being a musician, is that part of what you’re trying to express isn’t exactly yours.

My sound has a lot to do with all the musical influences I’ve discussed already, but it’s all filtered through my lived experiences and my practice as a musician.

Not really. I’m pretty partial to Epiphone, because they’re a lot more consistent and provide a better value than a lot of Gibson products. They’re also fun to upgrade and you don’t mind getting them worn in playing shows.

Amps: all of their specific purpose, and pedals are situational.

I use a lot of TC Electronic stuff, because it’s constructed well and comes at a fair price.

My amp. It makes my guitar loud.

I read and write a lot of poetry, which can be surprisingly useless when it comes to writing lyrics. What poetry has taught me was how to truly listen.

Other than that, I watch a lot of anime, which is much more useful for lyric writing.

In terms of bigger bands that have gained notoriety in the past five years or so, I’d say Deafheaven has had the biggest influence on me. Again, another band that has good understanding of texture and this sort of unapologetic attitude. I’m also heavily influenced by Strand of Oaks, who has gotten a bigger and bigger following with every album.

In terms of emerging artists: I think it’s too soon to say if and what influence folks will have. I think honest influence (versus trend riding), comes from careful study and exposure, which can only come about with time.

Aside from that, I’ve learned a lot about the business side of things from my friends and contemporaries.

Musicianship is very much a “practice” and a way of life. As such: make sure you practice and learn to love the grind.

So far we’ve only had to cancel one show, though it was with Wizzerd and we were really stoked on it. It was going to be our first show since November, when we took time off to record our album.

So much of what I do for the band is running social media and designing things, and we haven’t had to stop practicing yet. The only thing that is different is a sense of urgency to get things on the to-do-list done.