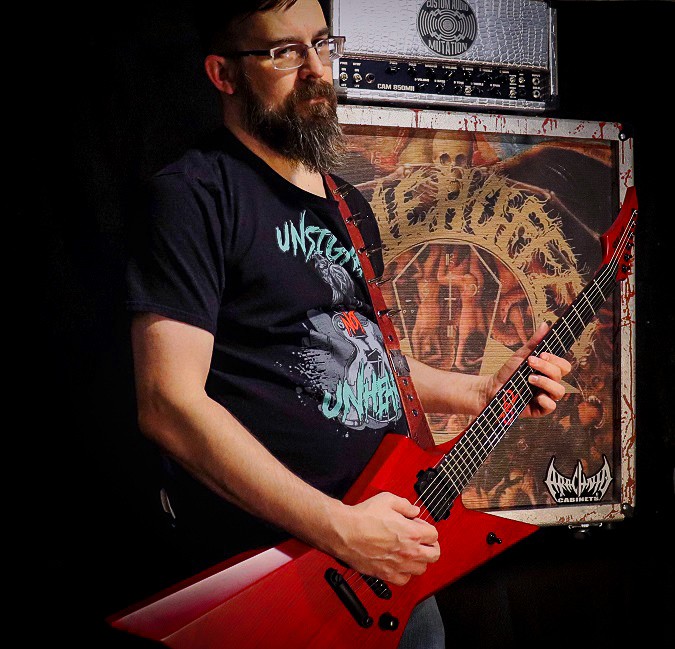 Ritchie Randall, guitarist for the Joplin, Missouri quartet of GRAVEHUFFER can usually be found ’round the various strands of the interwebs sharing music and generally being enthusiastic as all hell about most anything metal music related.

GRAVEHUFFER has been spending some of their time in these recent months getting some recording done, but we can check out what Ritchie Randall is up to these days, as he’s here to be our ninth piece in the Gear Assembly! Rock on…

When I picked up my dad’s copy of Judas Priest’s ‘Unleashed In The East‘ on vinyl. I saw KK Downing throwing shapes with his Gibson Flying V and knew that’s what I wanted to do!

Probably the song “Chains Around You“.

It starts out with a clean guitar part, builds in intensity, goes completely into a thrashy punk section, then slows to a super heavy doomy crawl. It pretty much has a big part of my influences in one song.

I use the exact same gear in the studio that I use live. I don’t use any pedals to record any of my rhythm guitars.

Guitar straight into the amp for the most pure tone possible!

I always have to piss before we play a show, haha!

As far as practice, I usually start by playing some riffs or songs I’m inspired by that I’ve been listening to during that week. Then I just start playing whatever pops in my head. If something excites me enough, I’ll record it on my phone.

We actually change up our set quite a bit. It takes a lot of practice time, but it’s fun for us to switch it up, plus each crowd gets a slightly different show each time.

We usually throw in little variations from the recordings, too. Almost all of our songs are a little bit different live than they are on the album.

Probably all the different influences that get mixed in that come out in my playing.

Sometimes I have no idea until someone else tells me that maybe a certain riff or something sounds like one of my influences. But in the end, we always get told that no matter what we do, it always somehow sounds like Gravehuffer.

I have to say it definitely starts with my Solar E Series Guitar. It plays so perfect. It’s comfortable to play standing up in a live situation, sitting down recording in the studio. It feels and plays better than any guitar I’ve ever owned.

It basically gets out of my way so I can just play. It’s sharp and pointy, too, so there’s that. Plus the color is “Blood Red Matte”. How metal is that?! There’s just some really great mojo in this guitar!

I get inspired by other music, of course. My family, the weather, animals, coffee, shitty people, political stuff, art, reading, holy crap I’m a sponge I guess… ha!

Right now I’m really into Acid Witch, as far as newer stuff. I love their mix of riffy doom stuff, with some old death metal, and the John Carpenter keyboard vibes.

Be nice! Network with each other. We’re all in this together, as cheesy as it sounds. Support your friends in all aspects of what you do. Reciprocation is so important. Don’t ever let anyone tell you that you need to grow up.

We had to cancel for 6 shows so far since March. A couple were ones that we were booked but not announced yet.

It’s definitely a confusing time. We’re just trying to pimp our merchandise online, doing that networking thing I just mentioned, setting up some live stream shows, and finishing up recording our new album.

(Check out Halsey’s review of their last release HERE.)

I honestly think I have my ideal set up now. I’ve been working with this band since 2008, changing my gear in the process. It’s taken quite a while to get to this point but I finally feel like with the gear I have now, that I can just play and not have to worry about anything else.

Actually, there’s one thing. My next Solar Guitar will have the Evertune bridge system in it. They never go out of tune!