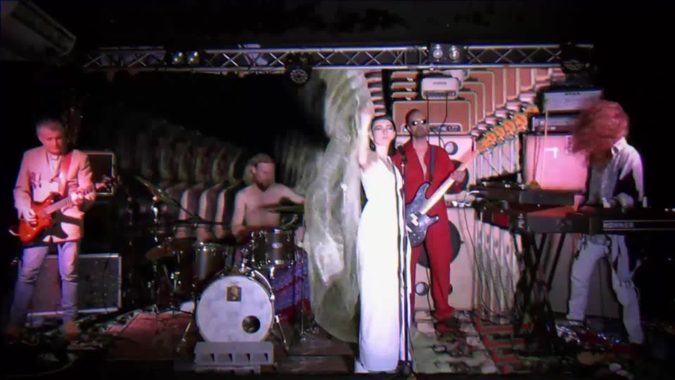 That said, France’s psychedelically immersed audionauts ORGÖNE announce the upcoming arrival of their debut studio album. Titled ‘MOS/FET‘, the double album finds this quintet doing the seemingly impossible and regaling listeners with intriguing narratives amid multi-textural aural transports. It will be released June 12th (digital) and June 19th (physical) via Heavy Psych Sounds and contains four suites, each is 20 minutes in length.

This musical journey is an atmospherically shifting delivery of tribal passages, Arabic sounds, rhythmic outpourings, organic space rock, and chaotic noise. These are stirred into a deep melting pot of stoner and psych-rock, progressive metal, and world music. What results from such a hodgepodge is a delectably fermented intoxicant unlike any other, one impossible to pigeonhole and today, you are able to taste test it for yourself.

ORGÖNE present their D.I.Y. long-play performance visualizer of “Mothership Egypt” and “Rhyme Of The Ancient Astronaut” from their “Anubis Rising” Suite. This 15+ minutes long, mini-film presentation possesses a vintage aesthetic in its overall look, a spacey serving of the otherworldly.

The D.I.Y. approach was not limited to the band’s ocular plane for the ‘MOS/FET‘ recording was self-produced by the band. The album was recorded at Blue Anvil Sound by Justin Nicquevert, mixed by Tom Penaguin, and mastered by Nicolas Moreau & Pierre Le Gac at Le Garage Hermétique. Along with the stunningly mesmerizing video, you will find the album artwork and tracklist included here.