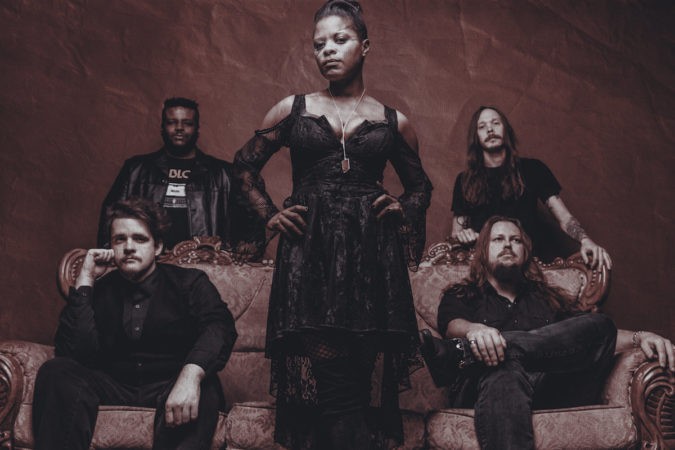 Somewhere in history, it is written “What has been will be again, what has been done will be done again; there is nothing new under the sun”… but I beg to differ.

Sure, there are many things in this world that are merely recycled regurgitation, something done quite well once, so why not repeat it thousands more times? This is a reoccurring curse in the world of music, becoming such after one band or artist creates something that appeals to a large swath of people. Then another band or perhaps a manager, or a record label employee, or what have you, thinks “Well, it worked for them so… why not so-and-so?” Well, there are myriad reasons why not, ones applicable to so-and-so, to you, and to anyone else for that matter, way too many to get into here. So, just let it suffice to say that if everyone could do it, they would be.

When the Covina, California-based band OLD BLOOD surfaced in 2014, it did not take long for music fans to realize this band was something else. What that was running a gamut of possibilities, everything from “unique”, to “creative”, “talented”, and much more, without question. Not only had they developed a sound all their own, but they had very much birthed a style all their own, one steeped in visualizations. Octopus (bass), C. Gunner (guitar), Diesel (drums), and J.F. Stone (synthesizers), created music with a heady blend of carnivalesque goth-funk and bluesy doom-in-retrograde.

They, along with singer Feathers, incorporated a very performance artist aspect to their music, bolstered onstage by the presence of The Rigomortettes. In 2016, after having signed with DHU Records, OLD BLOOD issued their eponymous debut album to rave reviews and fan reverence. Everything seemed right in the world with OLD BLOOD in it, so imagine the shock and immediate concern resulting from a 2019 announcement that Feathers was exiting the band.

The revelation shook many to their core, the uncertainty that loomed due to the fact that some bands are truly the sum of their parts. History has shown us that few and far between are the bands that not just survived a singer change but managed to thrive, and yet grow unimpeded afterward. Deep Purple, Black Sabbath, AC/DC, Van Halen, Anthrax… these are but a few examples on an already very shortlist. But now, there is a name that can justifiably be added to it, to be certain.

OLD BLOOD eventually announced the addition of singer Lynx, but still so much unanswered yet loomed: Would they merely attempt to mimic that which was before? Would they continue their upward trajectory with an all-new voice at the helm? Would OLD BLOOD still be good, sound unique, and continue to trail-blaze their own way forward? When these were answered, they read: No, Yes, and Yes!

Since 2019, we have determined that Mimic is a 1997 Guillermo del Toro-directed B-movie and no other variation of the word applies here, for it is not something OLD BLOOD does. We have also learned that Lynx is indeed her own woman with her own voice, and it is one that is powerful and dynamic. Lastly, we can rest assured OLD BLOOD has not missed a step nor skipped a beat; they shall indeed keep moving forward and upward as the next advance in their journey is revealed.

OLD BLOOD announced their second coming, by way of their sophomore album, ‘Acid Doom‘, due August 28th from DHU Records (Europe) and Metal Assault Records (U.S.). The highly anticipated follow-up to the 2016 self-titled introduction to OLD BLOOD, and their first with Lynx on lead vocals, was produced, mixed, and mastered by Reverend Tom Chandler in Glendale, CA. Today’s news is accompanied by the ‘Acid Doom‘ album artwork and coincides with the launch of pre-orders and includes a breakdown of vinyl variants and availability.

But wait, there’s more! To properly introduce us to the banshee now dominating the mic, as well as the unique continuation of the soothing OLD BLOOD sound renewed, we have the new single, “Veinscraper“. It is served up in one of the best mediums anything comes by way of this band — visually, ala an official video below from Vibra Linx Film & Photography.

‘Acid Doom‘ is available now in the following Editions (Test Press is Sold Out):

The new outing from OLD BLOOD, ‘Acid Doom‘, is set for release on August 28th from DHU Records and Metal Assault Records. Pre-order yours now at the following links: