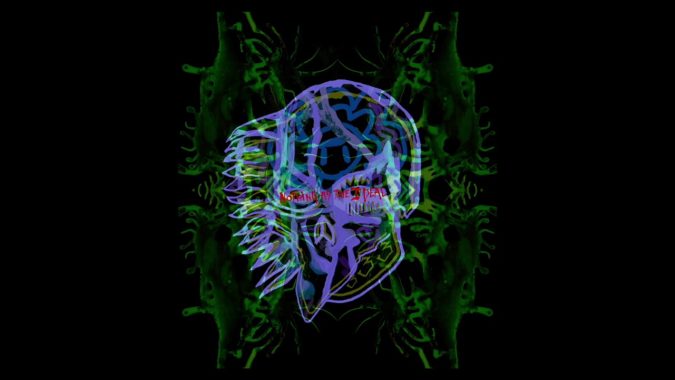 ‘Nothing As The Ideal‘ will arrive September 4th from New West Records and contains eight tracks recorded at the world-famous Abbey Road Studios’ legendary Studio 2 in London. For their first record without keys, the ALL THEM WITCHES recording line up consisted of bassist and vocalist Michael Parks, guitarist and songwriter Ben McLeod, and drummer / percussionist Robby Staebler.

As anyone familiar with ALL THEM WITCHES knows, the group specializes in creating hard-to-pigeonhole music that incorporates a multitude of styles. From psychedelic rock and delta blues to funk jams, alternative rock, and Americana, they remain a most unique musical entity. As for what people can expect on the new recording, in recent press, Ben McLeod revealed: “…constantly changing, well-rounded tracks with… a lot of different vibes“.

His statement is substantiated with the debut of the first single to arrive from ‘Nothing As The Ideal‘, the lead-in number “Saturnine & Iron Jaw“. From its soothing, sedate start, the song gains momentum and builds to an eventual boiling-over point. There is poignant, profoundly heartfelt emotion riveted into this harder-edged composition, but it is tempered with heady passages providing an escape.

Listen to the song below, provided with the particulars of the upcoming album that many fans harbor great expectations for. Those anxieties were recently stoked even more by a recent social media posting from Michael Parks, which in part read:

“This album for me is a return to center, and not in a way that is repeated by countless social media influencers or retail giants trying to improve their score. It is a return in the fact that, even in the lowest moments and even when I’m shoveling past rock bottom, I have a choice, and it shows up when it shows up. My job is to catch the moment of action when it arrives, and to see it as neither a burden or a blessing, but as ‘the way’…. We love you, please enjoy the music that we have made.“

New ALL THEM WITCHES album ‘Nothing As The Ideal‘ will arrive from New West Records on September 4th and is available in various formats. Pre-order is active [HERE], while a choice of vinyl variants, including a deluxe picture disc with reversed cover artwork and an accompanying poster, is being offered at the label’s webstore.

A planned April tour from ALL THEM WITCHES, postponed due to the Coronavirus, was recently rescheduled for July 2020. The dates for it are: