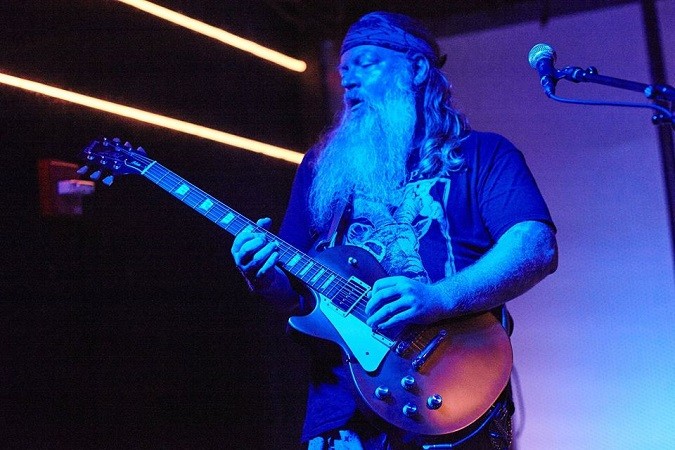 New York’s GEEZER has had a nonstop progression since its start in 2012. The steadily increasing discography starts with their debut full-length ‘Electrically Recorded Handmade Heavy Blues‘ (2013), then ‘Gage‘ (2014), a split release to start off the Ripple Music series ‘Second Coming Of Heavy: Chapter One‘ (2015), their self-titled ‘Geezer‘ (2016), ‘Psychoriffadelia‘ (2017), live release ‘A Flagrant Disregard for Happiness‘ (2017), last year’s ‘Spiral Fires‘ EP (2019), and now their just-released, brilliantly bluesy fuzzed, full-length ‘Groovy‘ (2020).

GEEZER guitarist and vocalist Pat Harrington also has had a long-running podcast – Electric Beard Of Doom – which I’ve had the honor (and innate fear) of appearing on a few times.  Mr. Harrington is a busy dood, but we’ll find out what else Pat is up to in 2020, as he’s here to be our twelfth piece in the Gear Assembly! Dig…

I rotate between a few guitars, both live and in the studio. My main guitar for Geezer is a Tom Cat by Pure Salem Guitars with Kent Armstrong P-90‘s. It’s an older model with a stop tail piece. All the newer models have a Bigsby Tremelo Bridge.

I also use a Gibson “Tribute Series” Gold Top Les Paul, which has a set of humbucker shaped P-90’s, as well as Dirty Penny, my SG Faded Special, which I’ve had for 16 years or so.

For about 5 years now, my amp is an Orange AD30. I usually run it through Orange 1×12 and a 2×12 cabinets. A smaller set up than most, the lower wattage amp gives me the ability to really crank up the volume and get the tubes burning. For many years, I used a Marshall 50w JCM 800 which was brilliant, but I got frustrated with not being able to get the volume much past 2, even on bigger stages.

The pedal board is ever changing, but it’s main components are a Strymon Capistan Delay, various mod pedals by Earthquaker Devices and 2 fuzz pedals. The fuzz pedals I’m running right now are a Frost Giant Electronics Massif (Orange Sparkle) and the StoneFly Effects Grizzly Fuzz. The Grizzly fuzz has been the cornerstone of my board for about 5 years now.

Prince. Let’s Go Crazy. I saw the video and when it got to the solo at the end. I know that is what I wanted to do.

Once I started playing, Zeppelin led to AC/DC, led to Sabbath, led to Iron Maiden, led to Metallica, led to Slayer, led to C.O.C., led to The Misfits… the list goes on and on.

Ugh. that’s a tough one.

One example would be “Dirty Penny” off of ‘Psychoriffadelia‘. It’s got a lot going on there. A heavy riff, catchy hook, melodic solos, and some serious jamming!

Warts and all, that song really captures a lot of what I like about music.

I pretty much use the same set up for both. Sometimes I’ll break out a weird guitar or amp to do overdub stuff, but when we record, I try and capture as much of our live sound as possible.

Not officially. As I get older, I need to be mindful about a few more things and sometimes my hands don’t cooperate. Generally speaking, I just try and stay positive mentally and stay loose physically. Just not too loose…

On Geezer‘s first few albums, I was messing around with a lot of things, different guitars, different tunings, different amps, etc… By the time we got around to writing songs for the self-titled album, I made the decision to simplify things.

We decided that we would stick to pretty much the same tuning (Drop C/D standard), I also figured out the set up that became the “Geezer sound”. That included the Tom Cat (P-90’s), the Grizzly Fuzz, and the Orange AD30. When those three things came together, I knew that was the sound I was looking for.

Guitar wise, I’ve always been a Gibson guy, mainly Les Pauls and SGs. As I’ve mentioned, I’ve started to mix that up a bit. In addition, I love Orange amps. There is just something about that tone, mixed with a fuzz pedal. I just can’t get enough of it.

I really dig the smaller pedal guys, too. I’ve mentioned Frost Giant and StoneFly already. They are killer dudes making killer gear and I always keep an eye on what they’re doing. I also have become a big fan of EarthQuaker Devices. They make gloriously weird pedals. There is so much cool shit going on with pedals these days, it’s pretty rad.

Once again, a guitar with P-90’s, a fuzz pedal and an Orange amp. That is the Stoney Trinity.

I wouldn’t call it a hobby, but I have two young sons. Between the band, work, the wife and kids. Ain’t much room for anything else. Surprisingly, I find that being a parent has contributed to my music in ways that I never thought possible. It has only been a positive experience.

I guess I should also mention that for almost two years, I have been working for Spector USA. Their shop is up here in the Hudson Valley and I have been learning how to build basses. Up until now, I haven’t had any experience in this, so it’s been pretty rad.

I’m basically learning the entire process from sourcing the wood, building all the components, to staining and sending it off for finishing. It’s amazing how much work goes in to building just one guitar. I have a whole new appreciation for the craft. I also now love guitars even more, which I didn’t think was possible.

They aren’t a new band, but I’ve been on this long running Bongzilla kick.

I also just got hip to Death Valley Girls, love everything about what they are doing.

Be yourself, play the blues, stay cool.

We had to cancel our trip to Austin. It would have been our first time in Texas and we are really bummed it didn’t get to happen.

As of now, we’re all just laying low and hoping for the best. Hoping the best for everyone as well.

More of everything please!