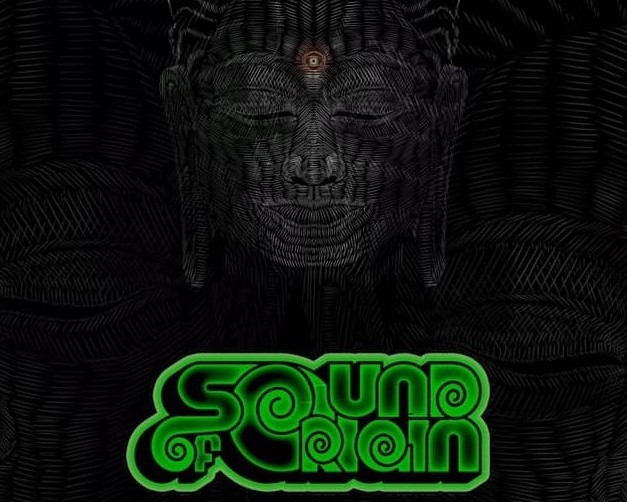 It is no exaggeration or embellishment of the truth to state the 2017 studio offering from the U.K.’s SOUND OF ORIGIN, ‘Seeds Of The Past‘, resonated well with fans of heavy music.

That recognition was an organic admiration, something natural, unplanned, and unexpected. The album served as a good introduction to SOUND OF ORIGIN; its raw, heavily fuzz-laden take on stoner rock quite alluring. The band – Chris ‘Foz’ Foster (drums), Joe ‘Zeph’ Wilczynski (guitar), Jax Townend (bass), and singer at the time, John Bussey – drew well-deserved attention and accolades for ‘Seeds Of The Past‘. Looking back, its title is most appropriate now / today, for what took root and grew from that release has been gradual, deliberate, and slightly time-consuming.

After some time in the spotlight, still yet echoing in our collective heads, the band would eventually go back to the underground and the drawing board. Never gone and damn sure not forgotten, the band underwent some changes and transformations. The most notable of these was a change in vocalists, as a new frontman, Joel Bulsara, stepped up to the mic… and what he’s brought with him has forever altered SOUND OF ORIGIN. But no one man is a band (in most cases); it takes an army of at least a few souls to make it all work, so Joel alone cannot bear the burden of distress or success.

Quite soon, August 21st to be exact, SOUND OF ORIGIN returns with the next phase of the band, via ‘The All Seeing Eye‘ from APF Records. This 9-song sophomore effort was recorded and mixed by Chris Fielding (Conan) at Foel Studios in Wales, and mastered by James Plotkin at Plotkinworks. Today, I am here to tell you to forget all you think you know about S.O.O., for the original sound of SOUND OF ORIGIN has evolved and more.

Before this stark reality is pushed to the front and driven home, we are given the chance to briefly reflect and weigh what may lie ahead. We are afforded this time of consideration for three-and-a-half minutes, as the somber doom pummeling of instrumental intro “Not Dead Yet” reminds us of this fact. Dark and harrowing, this emotional dirge takes us to a place where we yet know not what to fully expect from this revamped band… and then, there it is.

Isolated, rapid drumming lands body blows as the title track, “The All Seeing Eye“, comes into earshot. Just as soon as it arrives, we are hurled headfirst into a canyon-deep groove, one sludgy and dense-intense. Once the vocals kick in, a serpentine belt of guitar riffs and plodding rhythms sink in like barbs. This crushing cadence remains in place until about the middle way of the song, where paces briefly accelerate before returning to an even heavier doom deluge.

The first and perhaps more significant example of what varied vocalizations Bulsara is capable of comes next, with the rather apropos “Lockjaw“. There’s an unquenchable levity to this particular track, the music itself is “lighter” fare, but no less effective. Talk about laden with hooks, this one has more than a meatpacking plant, and they are well suited for the song with lyrical lines like “Bite down even harder… ripping the skin“. Why? Because they sink so deep into you and once embedded in flesh, there is no denying the pleasure of “Lockjaw“. This makes it quite understandable, as to it recently being selected for an official video treatment as seen below at the end of this review.

With the unfurling of each song, we are face front to SOUND OF ORIGIN in their enhanced and transformed state. The middle section of the album goes into some undeniably bluesy doom with such songs as “Dim Carcosa,” “Morning Bird,” and the aggro-sludging “Stoned Messiah Blues“. With what can only be attributed to massive amounts of influence from Down and Black Sabbath combined, this trio of tracks has the feel of being a trilogy at times. They churn a bit slower in comparison to other compositions, rippling with a slightly more downtrodden element to them.

Speaking of threes, there is a trifecta of tunes making up the third, later portion of this record. They are selections I found to be some of the most exceptional song-work yet from S.O.O. They begin with one of my personal favorites from this outing, “Voices Left Behind“, its thrashing riff intro both batters and burns. In fact, it sounds like what metalcore type bands refer to as a “breakdown”, but this is not in the vein of any metalcore, trust me. Sure, the metal portion fits right nicely, as in Stoner Metal, but truth is, I feel slightly bad for liking the song. Sound crazy? I do, because SOUND OF ORIGIN recently debuted it on their social media with a brief comment that read: “This one goes out to our frontman and brother Joel and to anyone who has ever felt the pain of losing a loved one.“

With condolences to Joel and the Bulsara family, all I can say is sometimes through heartbreaking tragedies and loss, moving and profound artistry is created. It is through such that the memory of a loved one’s soul is paid respect and tribute for all time to come.

What comes next is the song that seems to be anything but what its title implies, “Into The Vile“. Deliberate minimalism guides its roll-out, stripped down to an intermittent bass note with sparse cymbals backing it. Lingering upon the air for the first few minutes, all the while tension is building beneath, subtly at first. When it does eventually break the surface, it is not with throttling aggression or disturbance; no, it is guided and precise. To be a kinder, gentler SOUND OF ORIGIN as this song is, it is one I found to represent the band in a state of unified musical vision. Everything feels to be running in the desired manner, acutely melodic for the most part, and held firm by Townend and Foster‘s structured rhythms. The pair provide a skeletal-type patchwork upon which Wilczynski and Bulsara incorporate just the right type and intensity of their own additions and it is collectively superb.

This opus will end with the highly ambitious, massive, and multifaceted presentation titled “Tempest Dunes“. Another unhurried and attentive number exuding leisurely emanations, with steadiness chords are struck, drums are hit, and vocals emit. All are discharged as part of an overall master plan, much like how this song melds with the others to provide a complete, entire work. This end piece is able to stand alone fantastically, of course, running over 9-minutes in length and staying true to its bluesy doom template all the while.

As a whole, ‘The All Seeing Eye‘ is a magnificent artistic movement in musicality, one possessing signature nuances of the SOUND OF ORIGIN we once knew. At the same time, it serves as an expressive example of the band now, in up-to-the-minute real-time. With changes undergone, augmentations in scope and dynamics established and ever more further explored, this band manages to set themselves apart. Distinguished by creative excellence, illustriously noteworthy are SOUND OF ORIGIN as they reinforce notions of their being a band to watch for, whatever they may do next…

For now, live before and with ‘The All Seeing Eye‘ via the stream provided in this review; you may also head over to Bandcamp [LINK] for further streaming and purchase options, or to APF Records for purchase [LINK].