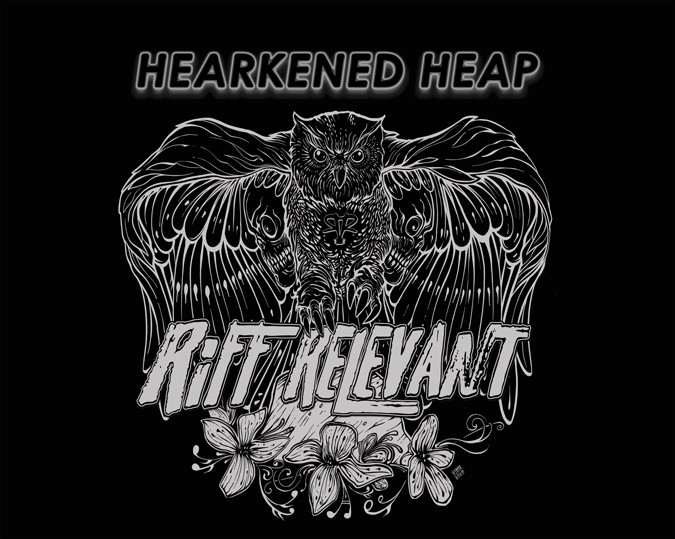 This random roundup of bands is the Hearkened Heap. This is my final 2020 heap…

With the year 2020 now complete, it felt like a decade, didn’t it? Instead of rehashing the low points, I’ll veer off towards how much I appreciated the incredible amount of ruthless determination the musicians, artists, and loving supporters of both have shown the rest of the citizens of Earth this year. It’s a surreal time, but imagination and creativity are purely unfuckwithable and once again music persisted, grew in new directions, and has prevailed.

In any standard year, it’s nearly torturous for me to attempt compiling an annual year-end list of musical favorites, and 2020 proved overwhelming by the sheer volume of releases that invited our ears to listen. In the end, how could I resist sharing a small swath of the gigantic bucket of music that kept me alive and moving forward every day? I can’t even contemplate what 2021 will bring.

There were so many releases, so many listened to so many times, but so many more were missed. Albums, EPs, Studio, Live, Acoustic, all styles, all heavy. Some you may be familiar with, surprised to see, or utterly unknown to you but maybe you’ll give them all a whirl…

These releases are incredible to my ears in so many ways and were listened to repeatedly, more than any others. Suffice to say – they helped me survive the year, period. I’ve managed to narrow what I hearkened to most often down to a heap of 50, with a run of honorable mentions that didn’t get enough spin time but are still solidly stuck in my craw. It’s a straight list with no genre or type categorization. HOWEVER, everything after #25 is on even ground, take the numbers with a grain of salt… they’re all tied for #26.

Book a seat for this exceptionally breathtaking musical flight of heavy and listen to this tale from start to finish. These tracks encompass nearly every composition style I’ve ever wanted to hear in one album, except maybe a tornado watch. Oh, wait…  [review]

The adamantly pummeling beauty of momentum by a perpetual sledgehammer cushioned in melody. It’ll crush your entire existence but first wraps you in luxuriously weighted contentment until a final breath is yanked from your ruin.

For nearly half my life, this band has consistently succeeded in creating music of such massively harsh weight that it simultaneously destroys my rusted soul and replaces it with a chromed-out new one. Their eighth album is no exception. [review]

An unexpected release that heaved a curveball of spacey post-rock joy at a world hell-bent on wearing blinders. What a purifying hazy light this album brings to rinse all the muck off your field of vision.

This album is almost unreasonably luscious and resonates with substantial elegance. An epic return. What else could I possibly say about it that hasn’t been said elsewhere with more eloquence?

The title’s play on a beautiful live Floyd album notwithstanding, this album is absolutely stunning in graceful simplicity. Stripped-down variations of some past favorites to reveal their exquisite core talents. Chills-inducing at every listen.

Stoner glazing with a dazzled smile in a plush backseat of the most malevolent muscle car as it glides you on the smoothest ride on the bluesiest block of the coolest town, rumbling right past a narrowly avoided panic attack. [review]

Churning heavy rock stacked full of fuzz and deftly thumping rhythms, radiantly balanced on the scales of doom by the significantly dark lyrical tales and abundant thickness of tone.

A jump on this trek across the aural universe of unimaginably addictive style diversity is a must. For some reason, a vision of a drunk-out-of-his-mind Jack White having the time of his life playing stoner rock kept appearing to me. No idea, but this album brought me a step closer to happiness with each spin. A sonic soiree and I’m powerless to its pull for repeat visits on this bliss trip.

A beautiful post-metal continuation of concept in exploring atmospheric metal orchestral arrangements with a surging strength that brilliantly ebbs and flows. Ultimately, it left me feeling like I earned a doctorate in geology even though I only audited the course.

They nonchalantly walk into the room and proceed to wreak complete carnage with unnerving melody, progressive textures, and sludgy post-metal slathered in glitter. At least four out of seven song titles are KISS album titles, although I’m not really a fan so I’m unsure why I noticed this or if it was even intentional.

A powerfully sinister barn burner of stoner rage partnered with doom outlined in melancholy, all encased in a smoking hot sexy suit of battle armor. “Let’s burn these fuckers to the ground.” …Indeed. [review]

The continued experiment by card-carrying stoner fuzz, heavy rock, prog, and desert jam legends that may have been born out of mutual respect with a large curious dose of “let’s see what happens.” Inviting guests of similar stock along the way, the core group seems to be finding collaborative direction with a united goal to simply do whatever the hell they want. They do it extremely well.

The final (double) album of a trilogy, it’s filled top to bottom with vivacious light and spirit. Warm and tranquil songs that seamlessly transform from intricate progressive rock to sweeping expanses of psychedelic adventure.

Conceivably what equates to a complete journey of peacefulness set to music. The most stunning embodiment of organic desert rock magnificence. One of the transcendent experiences of my 2020, both the music and the visual concert that stemmed it. [details]

The bona fide supergroup shows each member individually doing their best and at what they best love doing. Catchy without being cliche, what a thoroughly lovely brain bashing. Riffs for days, drums to dismantle all logic, vocal switch-offs… amazing.

Clicked play and within 19 seconds was completely annihilated. Never heard of the band before, but by the time I finished the first listen, reality had detached and I had to share the album link with three people just to make sure I wasn’t hallucinating how fantastic it was, then listened to it four more times. Ravaging thrashy death metal with an inhuman drummer. Paradise.

It’s like a hardcore pit was slowed down by a roving gang of emo stoners and when the haze dissipates, everyone is group hugging and charming the pants off security staff. Close the curtains, turn off the lights, spin the album, contemplate existence, then redefine your next life experience.

The only thing predictable about Tony Reed’s music is the unpredictability in what results from an imaginative tactical approach to creating it. An acoustic solo album devoid of vanity, just voracious talent exposing a reflective soul with full sincerity. [review]

Every time I listen to this band, my eyes close and my mind flies off into the aether and I forget where I am. If astral projection is a real thing, this is the album that could trigger the atmospheric engine that sails you into an alternate dimension. [details]

Dark Americana interpretive variations on some classic songs done in electric/acoustic. His distinctively alluring vocal tones paired with guest musicians make for menacingly powerful covers that are both exquisite and bewitching.

A veritably dazzling heavy surge of neo-psych to lift you to a higher altitude. A strikingly impressive debut that has me looking forward to more from these four gents, but I’ll continue enjoying this repeatedly until then.

SETTLEMENT – ‘What Once Was‘ [more Settlement]

If you’re a heavy band and have some news, send us your information [HERE].