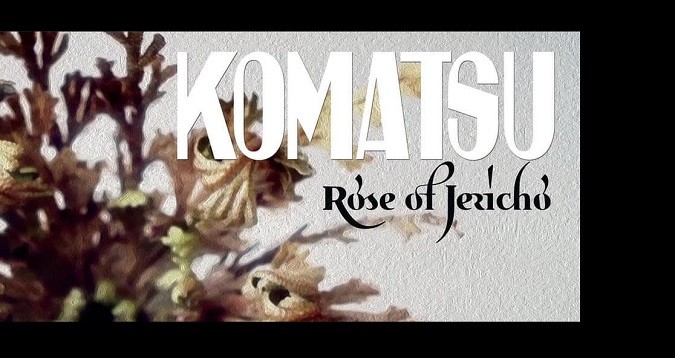 Eindhoven, Netherlands‘ massive rockers KOMATSU signed on last month with Heavy Psych Sounds Records for the release of their fourth studio album ‘Rose Of Jericho.‘ Due to release on February 5th, 2021, the band unveiled all details about the album as well as sharing the sludge-laden first single “Stare Into The Dawn.”

KOMATSU‘s powers of mass construction resurrected a rare desert flower in their fourth album ‘Rose of Jericho.‘ Light meets heavy and desolation meets beauty in the nine powerful songs that make up this album. ‘Rose of Jericho‘ combines a lyrical depth that resonates with the current (political) rabbit holes with dark, groovy, warm riffs supporting rugged vocals. The sound of the album is a real mixture between stoner and metal, but with melodic and choral vocal lines — tempo and rhythm changes make the listener glued to the speakers until the last note of the album.

The Dutch stoner metal unit was formed in early 2010 by members of the local Eindhoven Rock City scene. Many years of music experience in all kinds of bands, as well as individual creativity, created a brutal mix of sludge, stoner, and metal. The band released an EP ‘Komatsu‘ in 2011, then their first album ‘Manu Armata‘ in February 2012, which was largely acclaimed by the international press.

‘Rose of Jericho‘ was recorded in early 2020 and mixed at Studio Iglesias, Eindhoven by Peter van Elderen (Peter Pan Speedrock). Pieter Kloos once again did the mastering work at The Void Studio, in Eindhoven. The album’s cover artwork is by Lotte Voorhoeve.

We have the first single “Stare Into The Dawn” streaming below via Bandcamp or YouTube. The new KOMATSU album ‘Rose Of Jericho‘ will be out February 5th, 2021, from Heavy Psych Sounds in these formats: