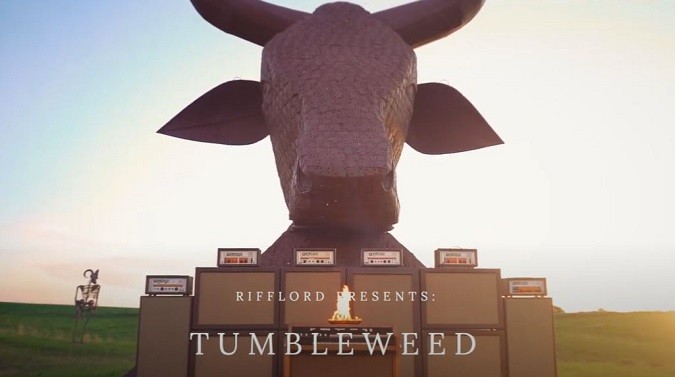 Sioux Falls, South Dakota is home to the ridiculously heavy groove of RIFFLORD. Teasing us with a new song off their soon-to-be-titled album that’s predicted for release in 2021, the band debuted this massive rock-heavy first single “Tumbleweed“, by way of an official video.

The midwestern stoner metal unit began in 2007, dropping their debut album ‘26 Mean & Heavy‘ in 2010. After several starts and stops, RIFFLORD let loose their sophomore album ‘7 Cremation Ground / Meditation‘ in 2018 [read about those starts and stops in our review here]. That album was one of my favorites of 2018, is still in my regular rotation, and will probably get another spin this week.

The band as it is today – Wyatt Bronc Bartlett (Guitars, Vocals), Matthew McFarland (Bass), Tory Jean Stoddard (Organ, Vocals), Paul Pinos (Guitars), and Douglas Jennings Barrett (Drums) – hasn’t sat idly since that release. They have a third studio album in the works, while it has no name as of yet, they do plan to team up again with STB Records for its release sometime in 2021.

“Tumbleweed” is the first single off that upcoming album. If it’s any indication of what’s to come, we’re all in for a new level of aural destruction. Each album has only displayed tremendous growth for RIFFLORD as a band and its songcraft, so it can hardly be imagined what they’ll bring us in 2021. The band had this to say:

“Covid robbed us of two tours, countless shows and community. But we’ll be damned if we let this time go to waste. Heads up, amps at 11 and forward motion. Blessings in decibels.“

Most of us would agree with the band’s self-assessment, I do believe:

The video for “Tumbleweed” was shot by Isaac Show at Porter Sculpture Park in Montrose, South Dakota, with editing done by Wyatt Bartlett. How many guitar solos are possible within 6:28 minutes? See for yourself, but I counted three, possibly ending with a duel and not including all the sinister bridges and breakdowns… good lord, RIFFLORD.