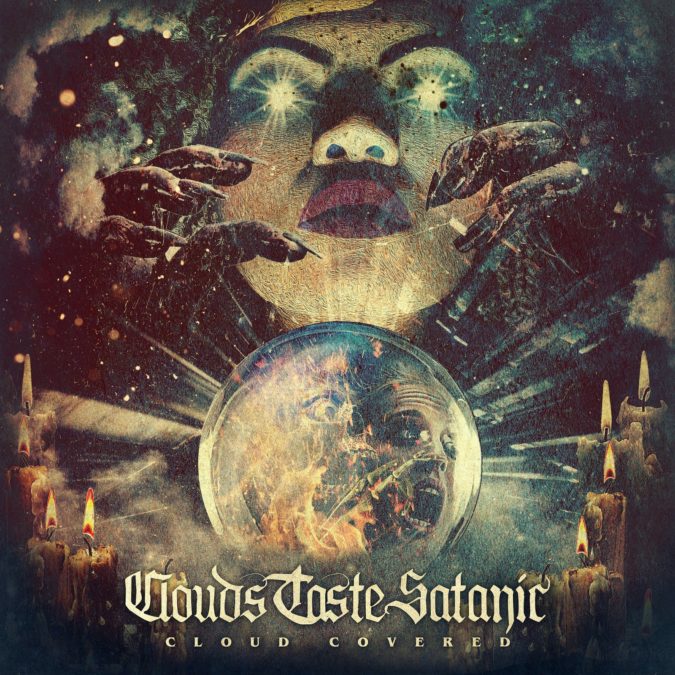 The instrumental post-doom quartet CLOUDS TASTE SATANIC returns this month with its seventh full-length album, ‘Cloud Covered‘. Due to release on Friday, March 19, 2021, the record features covers of tunes that have had a profound influence on the band but are not necessarily from the Metal/Doom genre.

Portions of the new album were previewed in ‘The Satanic Singles Series‘, which released its first of four parts on November 6, 2020, featuring “Funeral For A Friend” b/w “Also Sprach Zarathustra“. Three more singles were released last December, January, and February, leading up to the full-length ‘Cloud Covered‘ album, which has two additional tunes not released in the Series.

CLOUDS TASTE SATANIC formed in Brooklyn, New York in 2013 and have steadily built a reputation as one of the few truly great DIY riff-heavy underground bands playing today. Patiently and deliberately developing a unique sound that melds riff-dominated stoner rock with heavy doom, their live show is a multi-sensory atmospheric display, as a true experience and companion to their albums [photos].

In 2014, the band released its debut album, ‘To Sleep Beyond the Earth‘. The debut, along with the second album ‘Your Doom Has Come‘ (2015), third album ‘Dawn of the Satanic Age‘ (2016), and fourth full-length ‘The Glitter of Infinite Hell‘ (2017) [reviews & interview here], all demonstrate the band has no intentions of slowing down.

The band celebrated its fifth year anniversary in 2018 by releasing ‘In Search of Heavy‘, a four-CD Box Set, which quickly sold out. In 2019, the band achieved a bold goal of releasing two albums in one year. ‘Evil Eye‘ was released on April 30th (Walpurgis Eve), and ‘Second Sight‘ on October 31st (Halloween). With ‘The Satanic Singles Series‘ already released over the last several months, plus ‘Cloud Covered‘ now expected, we have no doubt that CLOUDS TASTE SATANIC has only just begun to stoke the flames of perdition…

Have a listen to “Not Fragile / Free Wheelin’ ” via Bandcamp and “If You Doom Me Now” in the video, both are streaming below.

Without a doubt, these covers are heavier than the originals, but not necessarily doomier. After six full-length albums (including a double) of original instrumental doom, ‘Cloud Covered‘ is a way for the band to change up the pace both for themselves and their supporters. Still fully instrumental but with songs well under the 20-minute mark, these songs make for a somewhat different CLOUDS TASTE SATANIC listening experience.

The songs included in ‘Cloud Covered’ were engineered and mixed by Ben Rice at Degraw Sound in Brooklyn and mastered by Alan Douches (High On Fire, Converge, Mastodon) at West West Side Music. The ‘Cloud Covered‘ artwork is original pieces done by Alexandre Goulet, whose graphic design work has graced numerous metal records including every album by Dopethrone. Be Heavy or Be Doomed…

‘Cloud Covered‘ will be available in Vinyl, CD, and Digital formats, with the release set for March 19, 2021. Pre-Order now: Cloud Covered on Bandcamp