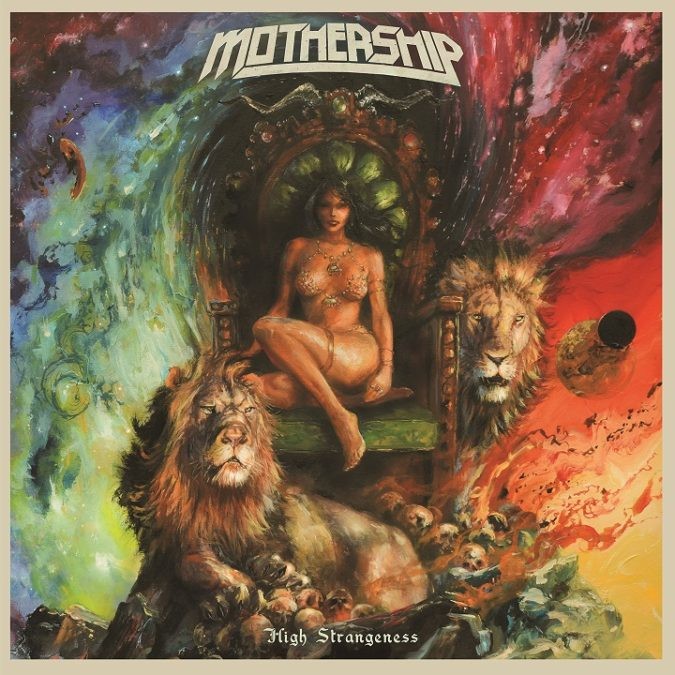 While, at its core, ‘High Strangeness‘ is a classic heavy rock album, Mothership’s attention to detail and careful layering push the boundaries of what a trio can do. The album was recorded and mixed by Ryan Lee (Crypt Trip) at Fire Station Studios in San Marcos, Texas, with mastering done by Tony Reed at his HeavyHead Recording Co.

Sharing vocal duties, Kelley Juett (guitar), Kyle Juett (bass), and Judge Smith (drums), each brings a unique voice to the intergalactic table. The band describes themselves as “supersonic intergalactic heavy rock”, and I buy it.

We’ve got Kyussesque grooves. We’ve got stoner rock riffs à la The Sword. We’ve got twin leads and bridges you could convince me are from Thin Lizzy b-sides. We’ve got trippy instrumentals. We’ve got ripping solos with delay for days…

Many caught Mothership out at Psycho-Las Vegas a couple of weeks ago.  They’ve also got a cover of Thin Lizzy’s “Are You Ready” coming out in November on Glory or Death Records‘ “Bow to Your Masters” tribute series [announcement]. The coolest thing about this choice of cover is that it’s the first proper studio recording of the track, as Thin Lizzy only released live versions.

If you’re ready to rock and you’re not messin’ around, you can check ‘High Strangeness‘ out on the Bandcamp embed below. Below that, you can check out some live show photos from our Editor (Leanne), when she attended Mothership‘s show at Saint Vitus Bar in Brooklyn, NY a few months ago.