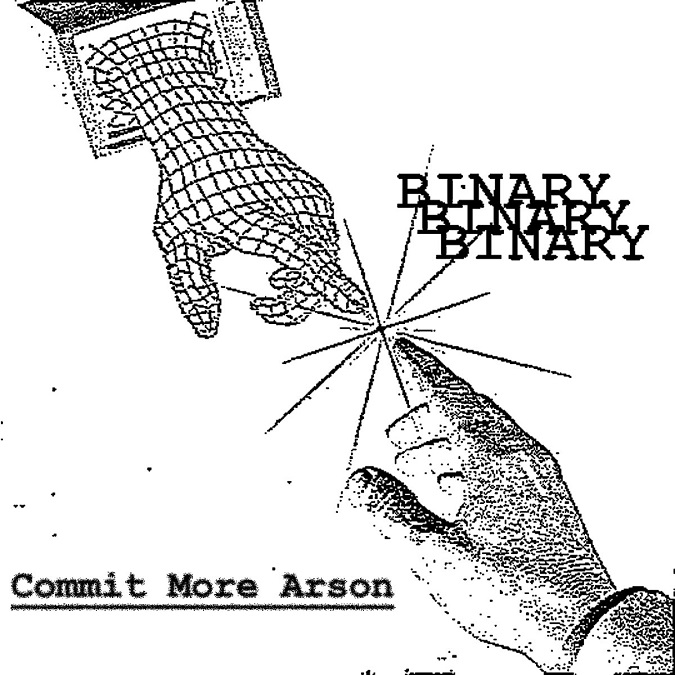 It’s almost impossible for kids these days to do anything right, “goddamned millennials”. But every once in a while they surprise you and totally redeem themselves from the fact that there are restaurants that only serve avocado on toast (delicious as it may be).

Such is the case with BINARY, a four-piece from Philadelphia, PA, who just released their first full-length, ‘Commit More Arson’.   For those not entirely familiar with the sound of emo-violence, think of a grimy fusion between powerviolence and screamo. Short, fast, vicious bursts of discord reminiscent of hardcore, but instead of barking, it’s more throat lacerating screams carrying a brunt of the vocals.

BINARY is exemplary in their execution of the style and should certainly not be confused with the broad mischaracterization of the word “screamo.” ‘Commit More Arson‘ is wildly raw and intense, but still allows plenty of melody to surface. The music is purposefully dissonant but the recording is tight.

Blasting out nine songs in somewhere around 13 minutes is a risky thing to do. You can easily become forgettable by being too one-dimensional, or by cramming in so much crazy shit that the whole album becomes anchored to an awkward palette of undecipherable randomness.

There’s no need to break down sub-genres like this is a complex mathematical equation, BINARY plays a reckless brand of aggressive music. They change-up the pace enough to keep the listener engaged, but they don’t haphazardly deviate from the crux of what makes them very good.

If you really can’t spare half of a half an hour to listen to the entire album, I’ll go ahead and direct you to “Around Here We Mourn Our Young”, “Do You Know How An Angler Fish Works?”, and “It’s Prince!” as my personal favorites.

Recorded by Ben Roth, Jon Smith, and Kory Gable at The Kaleidoscope in Lancaster, Pennsylvania on June 11th and 12th of 2018. Mastered by Will Killingsworth at Dead Air Studios. Per the band, it’s soon to be released on Cassette Tape and 7″ Vinyl by Zegema Beach Records, Suspended Soul Records, Friendly Otter Records, and Bottom of the Map Records.

Alex Mcfarland (guitar), Dijon Justice (drums), Jordan Shteif (vocals), Logan Reilling (bass) were gracious enough to put this one down for NYP (Name Your Price) on Bandcamp, but in the future, they might not be so kind. Just a friendly reminder to Philly, there are other ways to support the community aside from buying your tenth fucking Eagles Super Bowl shirt. Invest in a solid young band at the ground level, so you can sell their vintage shit on Etsy for an obnoxious price in seven years.

Stick around for a few more minutes and click play on the Bandcamp stream below to hear ‘Commit More Arson‘ in full, then read on to learn more about the band straight from their own mouths in our interview with BINARY. The kids are alright…

01. Around Here We Mourn Our Young
02. Do You Know How An Angler Fish Works?
03. Nice Moleskin, You Can Write In That With Your Head Up Your Ass?
04. Dressed to Depress
05. This Song Title Used to be a Phone Number
06. Like Us On Facebook To Make Us Hypocrites
07. It’s Prince!
08. Dataloss
09. I’ll Backhand The Fuck Out Of A Seagull

RIFF RELEVANT – Halsey:    BINARY has shown tremendous growth in a short amount of time. Your demo songs appear on your full length but sound significantly different. What changed in the recording process?

BINARY:  (Dylan) Short-fully after the demo, we kicked our second guitarist out and over the past eight months, playing those songs has lead to a slightly different vibe. Also, a lot was lost in the mix of the demo (in my opinion) that was better encapsulated this time in recording at The Kaleidoscope in Lancaster, PA.

RIFF RELEVANT – Halsey:    Dylan, your reputation as the MacGyver of the scene proceeds you. As not only a drummer but someone who books shows, what’s the most innovative shit you’ve had to pull to make sure a show went down?

BINARY:  (Dylan): Showing up to run a three-band house show and discovering that the electricity had been shut off, so someone brought a generator and we ran a rope of three or four extension cords from a neighbors outdoor outlet and ran the gig like that.

Aside from that, at a recent show at the house I live at in Philly, one of the touring bands was setting up their gear in the basement and their guitarist switched on their Ampeg V4 head and tripped the outlet. Spent 10 minutes looking at the breaker box dumbfounded as to why/where the power shorted, but luckily that was a super easy fix once we realized what caused it… and ditched some of our un-grounded extension cords, haha!

RIFF RELEVANT – Halsey:    What are your goals for this band?

BINARY:  (Jordan): Personally, I want to tour as much as possible in and out of North America.

(Alex): It would be cool to stay together for more than two releases.

(Dylan): Yeah, trying to get out on the road as much as possible, line-up another release, and to keep having fun with my friends are all good for me.

RIFF RELEVANT – Halsey:    In the media, Philadelphia is typically depicted as a notoriously degenerate slice of America. Is it accurate, overblown, or even rowdier than depicted?

BINARY:  (Jordan): I think what the media shows you are drunk sports fans of teams who historically haven’t always done too well. I’d feel wrong to generalize an entire city as being full of degenerates without analyzing the class struggle many of its citizens endure.

BINARY:  (Jordan): A lot of 90’s hardcore from Florida, the Gravity Records / Ebullition Records bands, Love Lost But Not Forgotten, Usurp Synapse. If you could call it “emotional hardcore”, it probably rubbed off on me.

(Dylan): Although they probably don’t influence much of what fuels this band, I love Yaphet Kotto, Alex G, my pals in I See Demons In The Woodgrain and possibly the best track of 2018 “Leglock” by Shakewell.

RIFF RELEVANT – Halsey:    What thoughts were on the table when your song, “I’ll Backhand The Fuck Out Of A Seagull” was titled?

BINARY:  (Dylan): So, we played a show down in Cape May on our little weekender before we recorded and, in typical South Jersey fashion, we enjoyed some hoagies in the parking lot of a Wawa, curbside. Logan drops a tomato and proceeds to throw it, causing all the nearby gulls to swarm over to us. We tried to scare them off and they all seemed to fly off… then like 10 seconds later it just starts down-pouring rain!

We all scamper into the van, and after a few minutes it tapered off and then the birds came back. As Logan was trying to defend us and the van, he proclaimed, “I’ll backhand the fuck out of a seagull!” Needless to say, we knew that had to be a new song title.

(Jordan): Well, I’m from South Florida and Dylan’s from Cape May, so we know damned well not to fuck with seagulls, but Alex and Logan are from Amish country. Where there is no sea and certainly no gulls, so Logan didn’t know how relentless those birds can be. Lesson learned.

RIFF RELEVANT – Halsey:    How did you feel when Lebron James signed with the Lakers instead of the 76ers?

BINARY:  (Dylan): “Trust in the process”

(Alex): Y’all questioned the birds and look where we are now.

RIFF RELEVANT – Halsey:    Is there anything you want to tell the world as BINARY?

BINARY:  (Jordan): Weaponize your feelings and create art that serves more than just yourself.

(Dylan): “Save art and drop out of art school” and “Commit more arson.”

RIFF RELEVANT – Halsey:    Do you ever bump into any of your old teachers at Harm’s Way shows?

BINARY:  (Dylan): Yes, and you were the teacher in question, and I talked your friend’s ear off when you walked away… AND it was a school night! Haha!

There you have it, BINARY, a passionate and intelligent band at the beginning of their journey… and me, a 35-year-old grown man who still goes to middle-of-the-week hardcore shows.