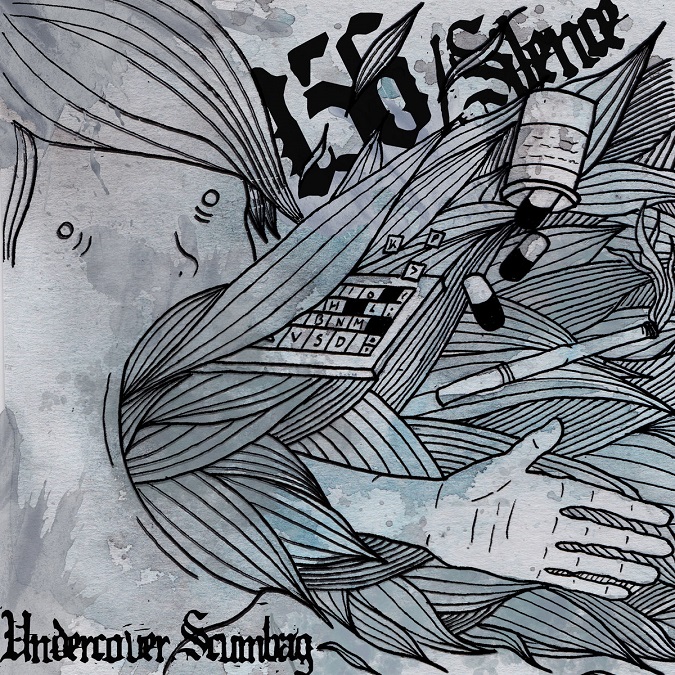 Recently I got a chance to talk to Pittsburgh Hardcore outfit 156/Silence about their newest album, ‘Undercover Scumbag’, and the recording process, as well as dig into how important it is to stick to their underground roots and scene.

‘Undercover Scumbag’ is an eight-song auditory beatdown. It’s a gritty, tantalizing project that deals with demons such as substance abuse and self-degradation, while also having an overload of knocking beats and dirty riffs.

In this one, 156/Silence gets down into every nook and cranny. From SWAT teams to cockroaches to Cap’n Crunch, 156/Silence, as always, leaves nothing untouched.

RIFF RELEVANT – Kaleb:   156/Silence utilized an array of different sonics for the record that causal listeners may not typically connect with hardcore or metalcore. Did the band intentionally go for a more eclectic selection or did you evolve into it during writing or recording?

156/SILENCE:   From the get-go we had planned to include a lot of the weirder noises but originally the songs were a lot more tame.

For example, the second track on the album “Fake it” wasn’t originally as crazy as it ended up being. Because we wrote the basis for most of the songs in the Summer of 2017 we developed a lot of the effects through experimentation.

RIFF RELEVANT – Kaleb:   Elaborate on the significance of the title of your new record ‘Undercover Scumbag’?

156/SILENCE:   The title refers to the fact that we all constantly learn things about people that we previously called friends or looked up to that lead us to look at them differently.

There is one specific story that led to our initial creation of the term, though. While on tour, we were offered to stay at someone’s house, we accepted not knowing anything about this person or where they lived.

As we pulled in we got excited, because it was a great neighborhood and the houses were beautiful. However once we got inside, we were greeted by many, many cockroaches. This person and their roommates didn’t seem to mind, and it was absolutely disgusting in every way.

RIFF RELEVANT – Kaleb:   It’s a known fact that 156 has heavy roots in the Pittsburgh Hardcore scene. What are some of the most important aspects of rising from a more underground presence? How do you try to stay true to that mindset as the band is gaining notoriety?

156/SILENCE:   The most important thing is to understand that the grind never ends. While we may have seen some success, it only means that we have to keep grinding even harder now. You can’t let one bad show ruin your day, especially when you’re playing places you’ve never been before.

But when gaining any sort of notoriety, it can be hard to stay true to the band and the way you felt when you started it. For us, we’ve always done things our own way and will continue to do that. Our band is DIY in almost every way and we plan to keep it that way as long as possible.

RIFF RELEVANT – Kaleb:   ‘Undercover Scumbag’ addresses a lot of dark and uncomfortable struggles, such as self-medication, do these topics reflect any personal influence?

156/SILENCE:   While only one person wrote them, we all can relate to the lyrics in some way. Being in a band that’s trying to tour and “make it” can take a serious toll on your personal life. It can get extremely stressful at times, but we do it because we love to do it.

RIFF RELEVANT – Kaleb:   Where are some of your favorite places to tour? What about these locations or venues made them rise above the others?

156/SILENCE:   We’ve played a ton of places on our current tour that we absolutely plan on going back to, but I’d say our favorites on this run have been Pocatello, ID and San Antonio, TX.

The amount of energy in the room when we played was insane and we can’t wait to go back. Nothing beats playing in a small room with everybody moshing and having a good time.

RIFF RELEVANT – Kaleb:   What’s the craziest thing that the band has experienced on tour?

156/SILENCE:   One of the craziest in recent memory was when the cops shut down our show in Bakersfield, CA. We were playing a house show on a Monday night and somehow over 60 people showed up.

When it finally became our time to play the noise ordinance was almost up, so naturally we were a little worried, but everyone assured us they had shows this late all the time and that the cops never come.

After two songs, the cops show up and begin shining their lights right on us. Nobody stopped us, so we proceeded to play two more songs before we were asked to stop by the promoter. By the time we finished those two songs there were upwards of 10 squad cars and the swat team. Nobody got into trouble, but it was definitely a crazy situation.

RIFF RELEVANT – Kaleb:   All of you were to go see a show together, who would want to go see? Who in the band are pit warriors and who are the dudes standing in the back with arms crossed?

156/SILENCE:   We all have very different music tastes so there aren’t many shows that we all go to together. However, there is actually one coming up in December that we all agree on. Every Time I Die, Turnstile, AngelDu$t, and Vein is a show that none of us will miss.

As far as moshing goes, everybody in the band moshes besides Jimmy. We usually end up hurting each other rather than other people and it usually ends up being a good time.

RIFF RELEVANT – Kaleb:   Choose your own ultimate tour package – who would be your ideal bands for 156/Silence to tour with, where would the tour hit, and what would the lineup be (set order)?

156/SILENCE:   As I mentioned earlier we all have very different music tastes, so this is a bit of a tough question. Overall, our dream lineup would include bands like Every Time I Die, Code Orange, and Daughters.

We honestly wouldn’t even care where the tour went our what the exact lineup would be, being on tour with those bands would be absolutely insane.

RIFF RELEVANT – Kaleb:   If everyone could describe themselves as a breakfast cereal, what would it be and why?

RIFF RELEVANT – Kaleb:   Open floor to you… what else would you like to let us know about before we close?

156/SILENCE:   As I mentioned before, we have no plans of slowing down. We’re already planning multiple tours for 2019 and will begin writing our next album soon. We’re extremely grateful for the small amount of success we’ve seen and we will continue to work harder than ever.

Thanks to all the guys in 156/Silence for taking the time to answer some questions and for regularly kicking my ass with their music. Find their next shows HERE.