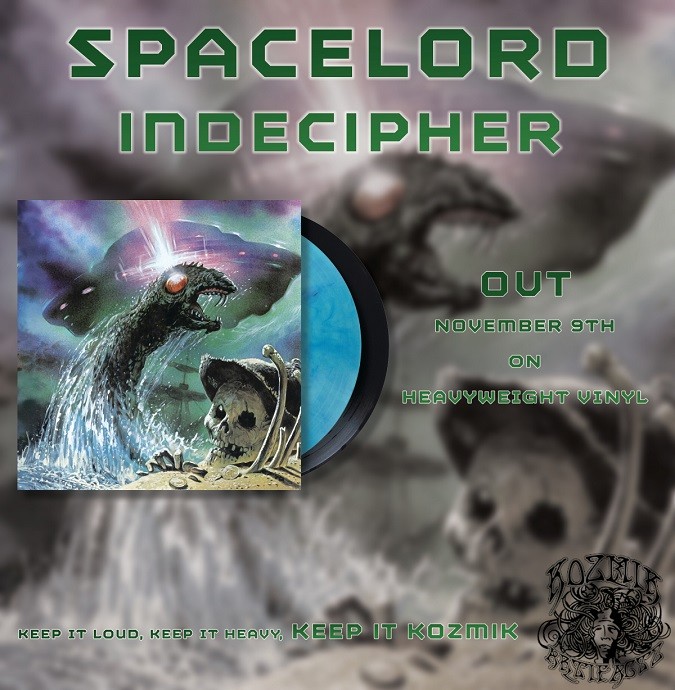 SPACELORD is a four-headed beast from Buffalo, New York. After forming in late 2016, they soon released their début EP ‘New Horrible Menace‘ in July and quickly followed it with their first full-length, a self-titled album in October 2017.

That self-titled SPACELORD album subsequently knocked more than a few socks loose in cyberspace. It made its way onto the Doom Charts for a couple of months after the initial release. Riff Relevant reviewed that first full-length ‘Spacelord‘ [review] and I’ve awaited their follow-up for quite some time now. That wait is over.

SPACELORD‘s second full-length album, ‘Indecipher‘ launched on November 9th via Kozmik Artifactz, and this time we can get our hands on a physical format on vinyl (which, of course, I’ve already ordered, because… record psycho since birth). The earlier SPACELORD self-titled album is still in pretty frequent rotation in my car, especially that opener “Five Days In A Hole” – which almost earned me a few speeding tickets for its irresistible ‘lead foot and sing-along’ heavy blues/rock temptation.

The eight songs on the album were written by Rich Root and Ed Grabianowski, with recording, production, mix, and mastering also by Rich Root. The original cover art illustration is by Oliver Frey. The vinyl LP is available from Kozmik Artifactz in two options – a black variant (100x) or clear/blue marbled (200x – the first 111 are hand-numbered ‘mailorder’ edition) – both versions were plated and pressed on high-performance vinyl by Pallas Group in Germany, with a deluxe 300gsm gatefold cover.

Their second full-length ‘Indecipher‘ starts off somewhat close to the original launchpad with the opener “For The Unloved Ones,” with a straightforward bass intro from Chris Cappiello, leading into churning riffs and the hearty, bamming rhythms of Kevin Flynn. The song starts to transcend as Ed Grabianowski takes his range from throaty crooning to soaring warnings, and the overall tone leans toward almost a longing – for darkness, for another, or to simply take leave of this land and be welcomed into another pack family.

“Doriath In Starlight” is a straight-up banger of heavy blues and riffs galore. Some of the heart-lonely may take the lyrics as a simple love song, and while it very well may be, there be much Tolkien lore also held in that there title. Regardless, Rich Root reveals a full-bore love affair with his guitar here and you can almost envision his closed eyes lost in each lick and pick moment. That ‘old dirt road’ and his crackling solos of lightning may have led him to a crossroads to make a hard choice…

Tracks three “Cruiserweight” and four “Super Starship Adventures” take us into a couple of anthem-stylistic, live crowd-pleasers, and while these are not to be skipped over, these two songs brought me to where I found “All In Red“.

This is hands-down my favorite song on this album. Just as the title might suggest, “All In Red” is a sexy, hip-shaker inducing song, but listen closely… this is that dark and seductively dangerous sinner’s kind of musical sinistry. All four of these gents are fully on fire here and seem so in sync with each other that it’s nearly unnerving. It hits me in all the right spots, especially the central passage where they just sail off into the outer limits of sensual ethereality before returning us to the conscious realm.

The last half of the album holds on to those reins tightly with no slowing down that strong gallop. They obviously are having a great time with these songs, both in and out of the studio. Each track on ‘Indecipher‘ brings a new story and with those tales they display a slightly larger SPACELORD. It’s a bit heavier, bluesier, not altogether darker in tone or topic, but still packs in well-structured jams of delightfully dark, blood-tinged stoner/ psych rock fun.

Buffalo, New York is known for some of the more severe and harsh weather with that lake effect syndrome, but SPACELORD appears to have used those storms wisely and conjured up a few of their own with ‘Indecipher‘. It rocks and rolls and has that same kind of subconsciously head-nodding, foot-stomper energy that may very well get me those speeding tickets I managed to avoid. I’ll forward the fines to Buffalo.