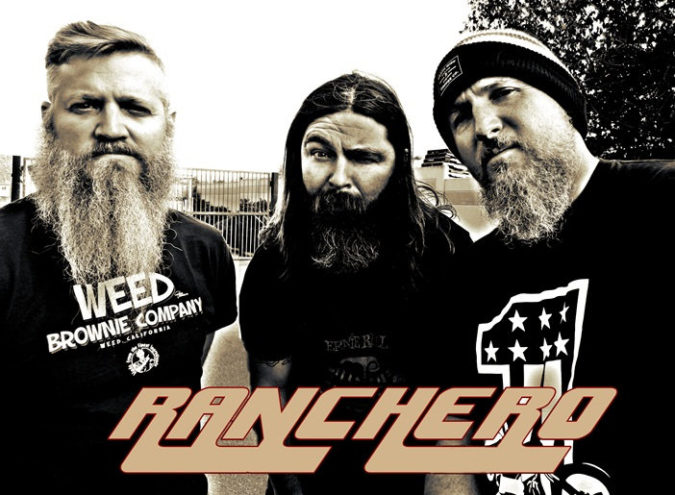 High octane boogie rock with a supercharged injection of blues, all topped off with a heap of punk attitude. Yep, that is exactly what you get, down to the T, with the recently released, self-titled offering from Cali’s RANCHERO.

Like a Formula One racer or a top fuel dragster, whichever you prefer, the rock music of RANCHERO – Beau Grant (guitars), Jonathan Wilson (drums), and Johaan Hill (vocals/bass) – is a mostly fast-moving machine of relentless riffs, rhythms, and grooves. The very first song to be delivered here, “No Time To Waste“, is pretty much a rallying call for what transpires over the course of the next half hour.

Straight outta the school of Fu Manchu, where Pat Travers is the principal, and classes are taught by ZZ Top, one blistering tune after another makes the grade. The curriculum contains the sweltering swagger of the monstrously grooved “El Torino” and its incredible follow-up, “Swallow Your Soul“. Like a one-two sonic knockout, this pair of tracks will pummel you with staggering guitar licks, roundhouse rhythms, and nitro-enhanced vocals.

Then there are the sun-bleached, scorching blues of tunes like the oh-so righteous, laid back “Jesus With Blacked Out Eyes“, or the thunder kissed chug of “Big Wheel“. The latter is a tight-knit, winding ride of thick riffs, sinister kit work on the drums, and solid vocals… just (audio) desserts for the desert rock justified if you will.

As great as all of these songs have been, the real icing on this cake comes in a pair of back-to-back tracks, “Gypsy Highway” and “Puking Oil“. Both are upbeat, uptempo batteries of ballsy rawk, the kind that is bolstered by quick licks and piston-powering from the rhythm section, ever driving onward, never pausing or stopping to ask for directions.

Let me go on the record here officially, as we find the year 2018 quickly coming to a close, that RANCHERO have unleashed the sleeper album of the year… that doesn’t actually sleep in any way whatsoever. Are there others out there, in the world of underground music outlets, that know of this band and this release? Hell if I know and to be blunt, hell if I care, because truth is, I know of them and now you do, too. There is no one to blame but yourself if you fail to take this for a spin.

Kick the tires, turn the key, give the RANCHERO self-titled some gas now, by means of the stream in this review, or tear ass on over to Bandcamp [HERE] for further streaming and purchase options.