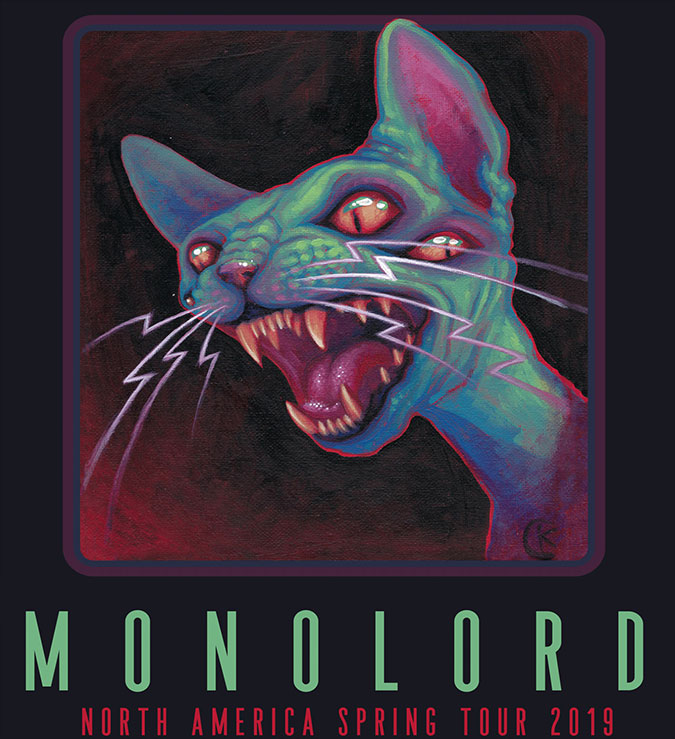 The gargantuan Swedish sludgy trio MONOLORD recently announced a North American tour set for Spring 2019, as well as a recent signing to Relapse Records. Gargantuan both in sound and stature, if you’ve ever witnessed these gents live, they certainly – and quite literally – stand up to their decibel level.

The Spring tour will launch in San Diego, CA. on April 19th, which happens to coincide with the last day of the recently announced Yob tour and quite the scheduling orchestration by Nanotear. Set to hit several markets stretching almost in full across the U.S. (with a date in Canada), before wrapping up around mid-May. While no support acts were named in the official press release, a few updates were found after some scouring of the interwebs,  as listed below.

The tour includes MONOLORD appearing at the first-ever DesertFest NYC, sponsored in part by Tee Pee Records. Also on that bill are Windhand, Elder, The Atomic Bitchwax, The Skull, Mirror Queen, Danava, Worshipper, and Dommengang. DesertFest NYC 2019 will be held at both Saint Vitus Bar and The Well in Brooklyn from Friday, April 26th to Sunday, April 28th; ticket information and purchase can be found HERE.

On another inaugural event, MONOLORD is named one of the headliners for the Psycho Smokeout 420 showcase (curated by Psycho Entertainment, the host of Psycho Las Vegas, as one might surmise), occurring on April 20th in Los Angeles, CA. That lineup also sees Monolord appearing alongside Elder, with Amenra, Belzebong, Goya, and several other lovely monsters of the heavy underground.

Speaking of Psycho Las Vegas, the MONOLORD set alone at this summer’s Psycho LV 2018 was, for me, worth the price of admission.

More photos from their set at PsychoLV 2018 here.

MONOLORD is expected to release a new album in late 2019 on Relapse Records, it will be the trio’s follow-up to their massive 2017 release for RidingEasy Records, ‘Rust‘. You can stream it in full below, then check the dates for a live show near you.