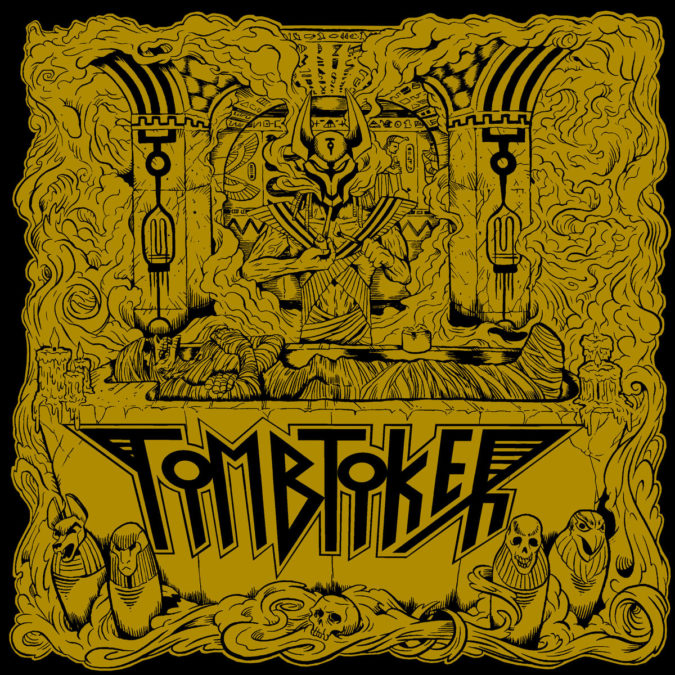 Maryland continues to dominate when it comes to the number of bands per capita that call the state their home, ones of varying musical styles and genres.

From the globally beloved doom movement that originated there, to classic metal and rock of the past, and to current entities of amalgamated output, there truly is something for everyone. For instance, the subjects of today’s review, the Baltimore-based TOMBTOKER, really are the type of band that is nearly impossible to pigeonhole with a single stylistic tag.

One traversing of their recently released début EP for Seeing Red Records, ‘Coffin Texts‘, will immediately confirm and affirm this beyond any doubt. In the five-song movement, TOMBTOKER – Mark Kuczak (vocals), Brandon Laing  (guitar), Nick Baldwin (guitar), Bret Lanahan (drums), and Dave Hagen (bass) – concoct an ungodly potion of death metal, sludge, doom, post-hardcore, crust, and more. It is flavored to taste with dashes of classic-inspired rock and metal while being brewed upon hellfire to remove any impurities.

From the sludgeoned start of “Warfare Revolution“, there is a clear-cut pursuit of heaviness, but such that possesses rhythmic groove and dynamics. Segments of unadulterated battering relinquish to passages dispatching fuzz thick guitars and slightly lighter fare musically, while the vocals always remain abrasive.

Each new song, such as “Robo Cujo“, “Blood Freak“, or “Globster“, is akin to an ever-changing set of gears, cycling through audible transformations with riveting ease. There is no sedation provided, it is all done with brutality and savagery despite a relentless enjoyment culled from the experience. As for my own personal good time, it came with the interestingly titled “Stenchsquatch” which, like everything else song-wise, takes the listener through a gamut of varying tempos, timings, and types of music.

Yes, Maryland delivers yet again with TOMBTOKER and their inaugural outing, the ‘Coffin Texts‘ EP, released on December 7th, 2018. It will bury you in a deep hole of the very heaviest of metal and you will thank them for doing so afterward.

Stream the EP in this review or proceed to Bandcamp for further streaming and purchase options. You can also catch the undead TOMBTOKER live on the following dates: