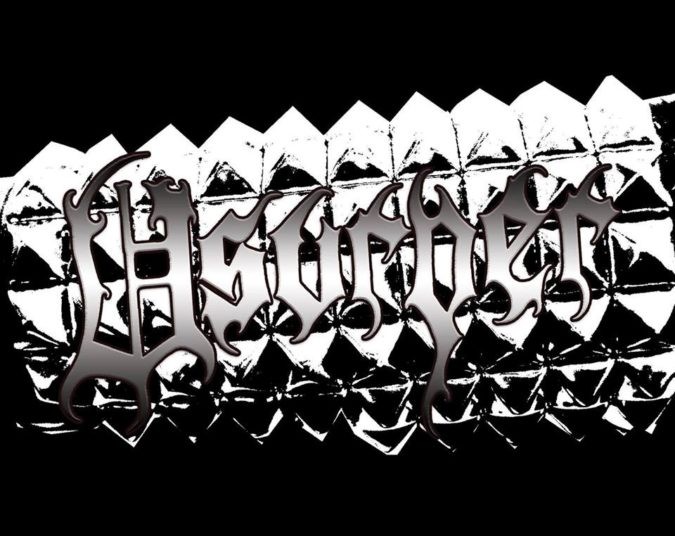 When they initially formed in 1993, Chicago, Illinois’s USURPER was all about creating and playing some super aggressively extreme heavy metal music.

Less than a year after that formation, the USURPER trio, multi-instrumentalist Rick “Scythe” Sprague, drummer Joe “Apocalyptic Warlord” Schaeffer, and vocalist Dave “General Diabolic Slaughter” Piekarz, recorded then self-released the four-song ‘Visions From The Gods‘ demo. The short player helped in getting increased exposure for the then-fledgling band, its musical contents a volatile blend of 80’s inspired thrash and classic heavy metal.

When USURPER issued their official full-length début, ‘Diabolosis‘, through Head Not Found Records in 1995, they had become a quartet with the addition of bassist Jon “Necromancer” Woodring. The band’s over-the-top, frenzied style of intense metal delivered via muscular guitars, sturdy rhythms, and able-bodied drums was garnering them a growing fan base locally and beyond.

Unlike similar bands, ones portraying themselves as dark or sinister outfits, USURPER avoided any and all religious or political ideologies in their music’s lyrics and band image. They also attempted to dodge lyrical themes related to social causes or real-world events. They instead opted to sing about monsters, mythologies, supernatural events, the paranormal, time travel, and more fantasy-oriented subject matter.

In the decade between their first full-length offering and 2005, USURPER released three more albums – 1999’s ‘Skeletal Season‘, 2000’s ‘Necronemesis‘, and 2003’s ‘Twilight Dominion‘ – as well as the ‘Threshold Of The Usurper‘ EP (1997). They were also included in several compilations and split releases. Just the same as any other band, players would come and go over time. Some that would claim membership in USURPER at some point include guitarist “Carcass” Chris Svoboda, and drummers Dave “Hellstorm” Chiarella, Andy Von Kaos, and Steve Sams.

In 2005, signed to Earache Records, USURPER – more specifically, the line up of Apocalyptic Warlord, Scythe, Necromancer, and Carcass, as well as new vocalist Danny “Tyrantor” Lawson – released the ‘Cryptobeast‘ album. Despite major label backing and extensive touring outside of the U.S., where they played international events like 2006’s Inferno Fest, USURPER disbanded in 2007.

Now, after a nearly fourteen year-long absence and some recent false starts, USURPER announces they will return with a new studio album, ‘Lords Of The Permafrost‘, via Soulseller Records on March 22nd.

With Joe Warlord and Rick Scythe establishing the connection to the classic era of the band, they are joined by returning ‘Cryptobeast‘ era vocalist Dan Tyrantor. The missing piece to this puzzle was located when the trio enlisted Project: Tsunami bassist and long-time USURPER  fanatic, Scott “Maelstrom” McDaniel. Now, this fearsome foursome is once again ready to unleash sonic savagery.

“After a 14 year hiatus, Usurper are proud to return with our sixth full length album entitled, Lords Of The Permafrost. Back when we formed in 1993, we had the goal to create heavy, memorable songs with the anthemic quality of traditional Heavy Metal, combined with the heaviness of death metal, the fury of thrash metal, the atmosphere of black metal and the straight-forward, ass-kicking of 70’s Hard Rock…. 25 years later, we feel we have stayed true to our original objective and have recorded the quintessential Usurper album. Lyrically these songs explore topics such as monster folklore, the paranormal and other obscure tales, all while being delivered with a lethal dose of Heavy Metal bravado. Usurper never have, and never will chase trends. We have only returned to bring our next chapter of metal to the Worldwide Warriors of Iron and Rust, and kick maximum ass!“

To make good on their claims, USURPER is sharing a lyric video for the new album’s title track, “Lords Of The Permafrost“. Along with it, we unveil the album artwork created by Juha Vuorma and the tracklist. ‘Lords Of The Permafrost‘ was recorded between July and August of 2018, at Electrical Audio, Chicago, and produced by the band and Taylor Hales.