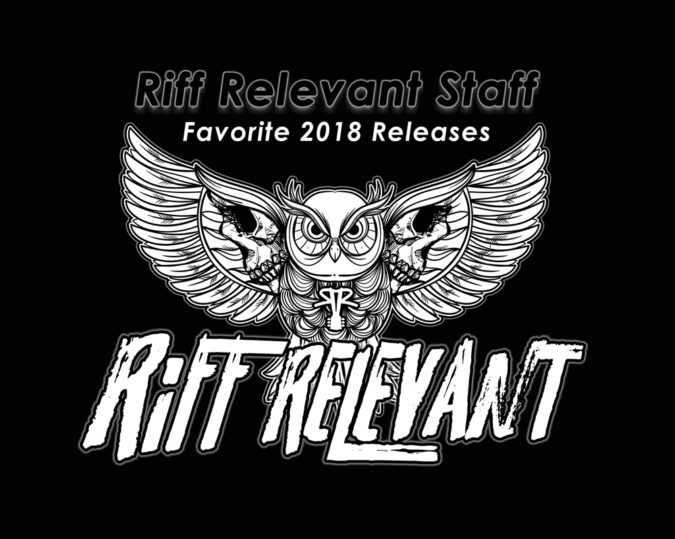 With such an abundance of truly mind-blowing music releases this year in all heavy music styles and sub-genres, compiling a small group of favorites can be daunting. It’s enjoyable, re-listening to albums and remembering how phenomenal it was the first time you heard it, but when we start to narrow those down into a smaller list… therein lies the task.

Four of our contributors – Kira, Santiago, Halsey, and I – all chose to take part in this year’s ‘Riff Relevant Favorite Releases’ for 2018. If you’re a regular reader, you may already have a feel for which of us leans toward certain music styles, and those tendencies are apparent in our respective lists.

It’s simpler this year. One article, four lists. Each list includes a Spotify audio playlist with one song from each album (if currently available on Spotify). We’ve also included links to each band’s Facebook page and their album title linking to Bandcamp or wherever you can buy the release.

Amorphis, ‘Queen of Time‘
(Nuclear Blast) This was the one that I couldn’t stop playing since it was released in May, and I still can’t stop playing it. Mature, detailed, a coalescing and honing of their sound, a collection as sound from track one straight through to the two bonus tracks. Songs like “The Bee” and “Daughter of Hate” are as spectacular live as they are on record, fleshing out and enhancing an already impressive set.

Wolfheart, ‘Constellation of the Black Light‘
(Napalm Records) A monstrous slab of dense, supremely beautiful melodeath with cinematic sweep enough to soothe the “Melo” fans and brutal heaviness enough to sate the “death” fans. With each listen, your ears grab something new, from a glorious guitar harmony here to a wickedly clever drum fill there. Frontman Tuomas Saukkonen is metal’s renaissance man, a composer, and songwriter of seemingly limitless range.

Amaranthe, ‘Helix‘
(Spinefarm Records) Another band that has completely defined and mastered their sonic objectives with their latest, “Helix” is catchy, bombastic (in the best way), and completely irresistible. Three singers don’t spoil the metal broth here; they only add spice and flavor and dimension galore. It’s so much fun to listen to, and that’s never a bad thing.

Burning Witches, ‘Hexenhammer‘
(Nuclear Blast) Traditional metal that blew my mind – I’m still trying to pick up the pieces. The musicianship and songwriting are stellar, the attitude is to burn, the confidence and maturity are off the charts. The album is a multi-layered statement with feminism at its core. The only way for these five Swiss women to go is up.

Enemy Inside – ‘Phoenix‘
(Rock of Angels Records) A fabulous début from this German band, featuring the lush vocals of Nastassja Giulia leading the way. Dark, romantic, richly melodic, but with a certain delicacy and airiness as well. Thanks again Evan K for alerting me to a rewarding collection!

Rivers of Nihil – ‘Where Owls Know My Name‘
(Metal Blade Records) RON makes Pennsylvania proud with this bold, ambitious effort, continuing their albums with seasonal themes (this representing autumn). It’s rife with variety in singing (guttural and clean), instrumentation, and mood, breaking the barriers of death metal while at the same time respecting them. It’s existential and deep and completely thought-provoking.

Visigoth – ‘Conqueror’s Oath‘
(Metal Blade Records) A band from Utah who thinks they’re European, Visigoth’s second album is a rollicking thrill ride of melodic power metal as it used to be, respectful to the old ways while forging their own exciting new ones. They are hinting at new music for 2019 and I look forward to it.

Witherfall – ‘A Prelude to Sorrow‘
(Century Media Records) An album steeped and rooted in tragedy (the death of drummer Adam Sagan), a musing on sorrow and loss from many different angles. Thoughtful and poignant, moving without being maudlin, beautifully arranged and composed – a masterful addition to the prog metal canon.

Cellar Darling – ‘Insomnia‘
I raved about the Swiss prog/ alternative/ folk/ metal band’s debut album ‘This is the Sound‘ in 2017 [review] and this preview track (included on the playlist below) from their upcoming follow-up is chilling and eerie and thundering and absolutely stunning. What the trio of singer/multi-instrumentalist Anna Murphy, guitarist Ivo Henzi, and drummer Merlin Sutter have accomplished with just this song is putting them at the fore of modern metal.

Another year has come and gone. Once again many wonderful albums have graced our turntables, cd players, and cassette decks. There has been a ton of great music across the wide spectrum of metal genres this year and 2019 is already shaping up to be just as great.

Choosing only 20 for the year was quite daunting and some great albums have been left out, yet I hope some of you might find something new on this list. So long, and many continued listens to all.

2018 kicked ass. I excavated the remains of a frozen caveman, the likes of which resurfaced during an earthquake in Los Angeles, California. To the dismay of the scientific community, I was able to thaw out the human artifact and restore him to full vitality without the aid of any modern technology. All I needed was a few small fans and a heater.

Once resuscitated, I manipulated the caveman to progress my own social agenda. Priorities included, but were not limited to: Nugs, chillin’, grindage, wheezing the juice, gonzagas, riding the Vapor in reverse on Mega Mountain, fighting at Blades, roasting Pauly Shore, and Rad Mobile. In the end, I failed to capitalize on any relevant stardom but did throw a sick pool party. It was attended by many local babes from Encino and Vince Neil of Motley Crue fame provided the soundtrack.

A lot of great music came out, too. Here’s a list of my Top 20 bangers (click album title for link) and also a link to my book, which came out in December of 2017  -which is basically 2018, and still makes a helluva gift.  – High Nineties, by Brian Halsey

My list is based on my most frequent listening for the year. To keep it in perspective, I put the list in alphabetical order by the band. Do I consider any band or album to be “the best album”? No. There are too many factors to consider and in the grand scheme of things, I enjoy too many styles of heavy music to ever consider one single release to be “the best.”

My opinion is irrelevant, I merely found myself drawn to these albums more than any others for the year 2018. These bands and their music made me keep coming back to listen to these albums again and again. I’ll be playing many of these for years to come. Such sweet, sweet suffering…