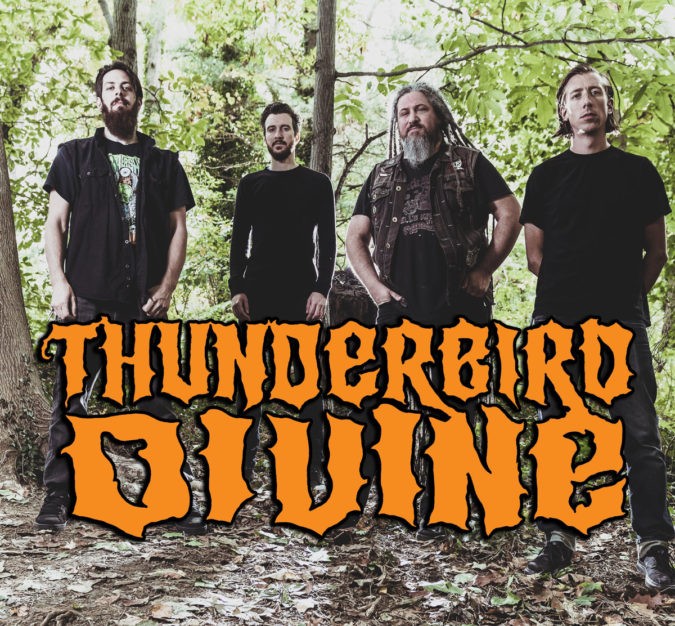 In 2016, when a pair of nesting bald eagles took up residence in Pittsburgh, the city invested money in a webcam to record the ultra-rare happenstance. The eagles, obviously accustomed to the viciousness of the land, promptly started plucking cats off the street and snacking on the corpses in their nest. For the whole world to see. Honorable mentions include giving a parking ticket to a van that had been previously lit ablaze, extinguished by the PFD, and left to rot in a no parking zone. They gave a parking ticket to an unidentifiable van that clearly belonged to no one. And I won’t even bother lamenting the atrocities committed during the Super Bowl run.

How does THUNDERBIRD DIVINE fit into all of this? How do they fucking not? Consider the undeniable evidence presented on ‘Magnasonic‘. A four-song epic that traverses the boulderous terrain of heavy doom through the sweeping soundscapes of psychedelia. You get to indulge in everything you love without the hassle of skipping a single track or putting down your oversized soft pretzel to change the record. THUNDERBIRD DIVINE brings the heavy from start to finish in mesmerizing fashion. If you want the intense musical breakdown of everything these guys do well, check out the review computed by our Writer Cyborg, Pat.

I took a different route. I battled my way through a thick smog of distortion and found a house made of dirty fuzz on top of riff mountain. The official home of THUNDERBIRD DIVINE. I didn’t have to climb a street post slathered in Crisco or punch a police horse in the face on my travels. I wanted to. Because it is the way of these people and I had to win them over in order to acquire this coveted interview. Enjoy it below.

While you can order the album ‘Magnasonic‘ digitally via Thunderbird Divine‘s Bandcamp or the CD at Salt Of The Earth Records, there is now a vinyl option! Interstellar Smoke Records recently announced they’ll be offering ‘Magnasonic‘ on vinyl in three editions for a total of 300 pressings, with the following for each:

The vinyl is available for pre-order on Thursday, February 21, 2019, at Interstellar Smoke Records

RIFF RELEVANT [Halsey]:   Congrats on ‘Magnasonic‘! Thunderbird Divine covers a lot of musical territory in only four songs. Was that by design or did it just come about organically?

Thunderbird Divine [Erik Caplan]:   Thanks for the kind words. The songwriting on ‘Magnasonic‘ came together in a very natural way through healthy collaboration. We definitely didn’t try to do anything but create the kind of songs we all enjoy hearing and playing. What you hear on the record is the result of our chemistry as a band.

When it came to recording, our main goal was to do something beyond the usual stoner/rock/metal album. We wanted it to be layered and have depth, without sounding like we were trying to be weird for the sake of being weird. We all had ideas about the kinds of sounds we thought should be featured throughout the various song sections, and we definitely made sure all of those elements, no matter how unconventional, made it onto the recording.

Once we started letting our friends hear some of our early mixes, folks started telling us that we were doing something really different and interesting. I think we were so hyper-focused on making the record we had in our hearts and minds that we didn’t have much perspective on the way it sounded, beyond knowing we busted our asses putting it together.

RIFF RELEVANT [Halsey]:    From what I understand, your band name is derived from a Vietnam War veteran who was quite the character. Aside from being a badass name, what attributes of this dude resonate with you to the point where you’ve decided to use the name on multiple occasions in your music career?

Thunderbird Divine [Erik Caplan]:   The person we’re talking about was (I’m assuming he’s passed away by now, but I don’t know for sure) a homeless-by-choice alcoholic veteran with some pretty intense mental problems. When I knew him, I was a teenager, and I found his choice to live a divergent life from the rest of the people we knew fascinating. He seemed to live without concern for any social constructs. While I thought it was an interesting way to live, I wasn’t anywhere near brave enough to try it for myself.

The memory of his bravado and wild spirit set against his desperate existence is a dichotomy I continue to find compelling. Initially, I thought writing a song about him would give me some kind of clarity about the way I feel about his memory, but I guess I just wasn’t done with him after I wrote lyrics about him in my last band. The fact that I have no idea what became of him adds to the mystique. I hope he’d have liked what’s been done in his name.

RIFF RELEVANT [Halsey]:    There appears to be a great deal of experience in the band. Can you speak to what elements each particular member brings to the table?

Thunderbird Divine [Erik Caplan]:   The first thing I need to say about my band mates is that I’m incredibly lucky to work with people who are willing to put up with my obnoxious personality and caterwauling. The three of them had already been working together for several years before I came along, so I walked into a pre-made band situation.

Flynn, the other guitarist in the band, is a rock solid, accurate player who rarely makes mistakes once he’s learned something. He’s flexible, remembers arrangements and always has his shit together.

Adam, who plays bass, is a free spirit and the arbiter of cool. He adds secret extra ghost notes to riffs and chord progressions to make them special. We can always depend on him to be honest about whether things are cool or not, and he’s pretty much always right. He’s also a killer designer who created the album art for “Magnasonic.”

Mike, the drummer, is an incredibly positive, upbeat person and a very soulful musician. He plays with passion, and I’ve never seen him bring a crummy mood or attitude to a rehearsal or show. He’s also a gifted video editor, and he put together our three official videos.

As for me, I’m the weird older guy who yells into the microphone and can’t stop making up stupid riffs and songs about cursing people forever or barbed wire.

As a group dynamic here’s how it works: I throw around outlandish ideas until something sticks, Adam decides if it’s cool, Flynn remembers it and Mike plays the hell out of it.

RIFF RELEVANT [Halsey]:    Philadelphia is often the center of pop culture appeal, whether it be Rocky, It’s Always Sunny, or Edgar Allen Poe banging out the Tell Tale Heart while he was banging out his cousin. (Gross, but such a Mcpoyle move). What stories, fiction or non, best represent the Philly you know?

Thunderbird Divine [Erik Caplan]:   Philly is an old city, and, like most old things, it has a checkered past. We’re remembered as the birthplace of liberty, the home of Benjamin Franklin, and a cradle of arts and education. However, we’re also known as the most hostile city in America, the land of looting sports fans who booed Santa Claus, and the home of serial killer Gary Heidnik.

In my opinion, Philadelphia is tough to sum up in a single story. It’s a cultural mish-mosh full of sarcasm, bizarreness, and contradictions. I think this city is different things to different people, but to me, the freakish reality exhibited in David Lynch’s “Eraserhead” comes closest to illustrating the city I know. Sometimes you just don’t know if it’ll be scary, funny, comforting, or just plain weird.

RIFF RELEVANT [Halsey]:    What bands influence your sound? What are your guilty pleasure bands?

Thunderbird Divine [Erik Caplan]:   I think we have a lot of obvious influences like Black Sabbath, Monster Magnet, Motorhead, Led Zeppelin, and Grand Funk Railroad, but we each bring divergent impressions of those influences to the table when we write together. I don’t think we’d ever want to ape any particular band’s sound or style to an obvious extent.

As for guilty pleasure music, that term implies feeling shame in enjoying music, and I’m never ashamed of the music I like. I think some of my more metal friends might be a little surprised at the range of music I enjoy. For example, this afternoon I listened to Lauren Hill, Old Dirty Bastard, Santana, Spice, a couple of songs from Hedwig and the Angry Inch, Sleep, and Django Reinhardt.

RIFF RELEVANT [Halsey]:    The Kung Fu Necktie has the esteemed honor of hosting my favorite show of all time, and I’ve noticed you have a couple of gigs under your belt at that venue. Where are your favorite places to play or watch live music?

Thunderbird Divine [Erik Caplan]:   Kung Fu Necktie is definitely a pretty enjoyable place to play or see music in Philadelphia. Other good rooms are Tusk, Johnny Brenda’s, Underground Arts, and The Century Bar. There are plenty of other similar places across the city. Each of these places has its own appeal, and it’s pretty cool to have so many options available.

RIFF RELEVANT [Halsey]:   High on Fire just won a Grammy, which is awesome, but largely shocking. What are your thoughts about the current state of heavy music?

Thunderbird Divine [Erik Caplan]:   I think it’s pretty cool that High on Fire won a Grammy. I don’t think anyone, including those guys, saw it coming. They certainly put in the time and effort to earn it and, while I’m sure they don’t care what I have to say about this, I’m happy they got some recognition.

I find mainstream heavy music pretty uninspiring and rather dull these days. Most of it sounds like it’s going to give my ears some kind of herpes. Part of the problem is that so many of the artists in this category focus on being heavy, more so than writing good songs or doing something interesting with the genre. There will probably always be bands who are happy to retread previously explored territory and be a Pantera or Metallica reboot, and I’m sure there will always be an audience for them.

This doesn’t bring me down, though. There’s a strong current of artists who take risks and break new ground in songwriting and playing, and you can see them play mid-sized rooms in almost any town or download their music on bandcamp.

RIFF RELEVANT [Halsey]:   If your band had to pick a spirit animal, what would it be and why?

Thunderbird Divine [Erik Caplan]:   I can’t speak for the other guys, but I dig turtles. They’re slow and steady, self-sufficient, and full of ancient wisdom.

RIFF RELEVANT [Halsey]:   Thanks for your time! Is there anything else you want to say for the good of the order?

Thunderbird Divine [Erik Caplan]:   Thanks to everyone who has had nice things to say about our début album! We really appreciate the support and love. Come hang with us soon!