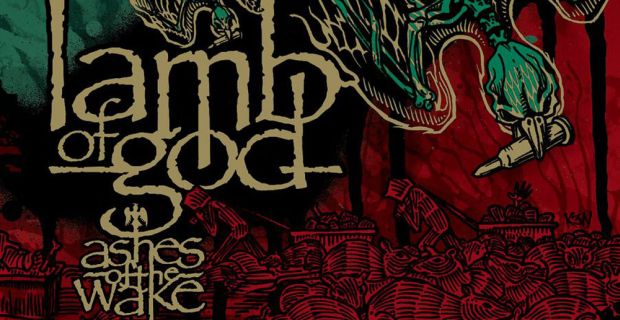 This August will mark a decade and a half since the Richmond, Virginia-based, modern thrash metal monster LAMB OF GOD unleashed their 2004 major-label debut, ‘Ashes Of The Wake‘.

To properly commemorate this milestone, LAMB OF GOD announce the expanded, 15th-anniversary deluxe edition re-issue of this incredibly successful album, originally released through Epic Records. The new double LP will feature the original record, plus four non-LP tracks: the Japanese bonus track / B-Side “Another Nail For Your Coffin“, and three previously unreleased demos.

For those that were around to experience this iconic recording’s original release, it struck a severe blow to the notion that more aggressive or extreme metal bands, were limited as to where their popularity might ascend. ‘Ashes Of The Wake‘ was a battering ram that effectively smashed barriers and propelled LAMB OF GOD to a whole new plane that they utterly dominated by sheer force of will. Like its predecessor ‘As The Palaces Burn‘, released within the span of the prior year, this album was also an uncompromising sonic document but highlighting the more alluring traits of the band’s music.

With an abundantly growing amount of groove with irresistible hooks and just the right amount of melody, songs like “Laid To Rest“, “Omerta“, and “Now You’ve Got Something To Die For” became instant fan favorites. Plus, LAMB OF GOD managed to get guitar virtuosos Alex Skolnick (Testament, Metal Allegiance) and Chris Poland (Ohm, Damn The Machine, ex-Megadeth) to provide the killer solos on the instrumental title track, “Ashes Of The Wake“.

Guitarist Mark Morton recently reflected upon the “Ashes Of The Wake” album, offering the following:

“As I recall that moment in time, it was a pivotal point for our band. We were transitioning from the relative comfort of an underground scene that we felt confident and natural in, to a much higher profile with higher stakes and more critical eyes upon us. It was our first release on a major label and our first to be aggressively marketed through mainstream channels. I remember feeling a mixture of pressure and confidence, along with a pervasive uncertainty as to whether our brand of bottled insanity would translate to a larger audience. Ultimately, I think our biggest strength in that situation was that we never let pressure, expectation or the potential for failure effect our creative process. We stepped up our collective focus and concentration to rise to the occasion, but we stuck together and stayed true to our identity, artistically and otherwise. That tunnel vision approach to our creative process is part of our DNA as a band. I believe it’s a large part of what keeps us honest and motivated to this day.”

The ‘Ashes Of The Wake‘ 2xLP expanded edition on limited Green Smoke vinyl – also included with merch bundle options – will be available to LAMB OF GOD webstore patrons only. Pre-order is active now at this LINK.