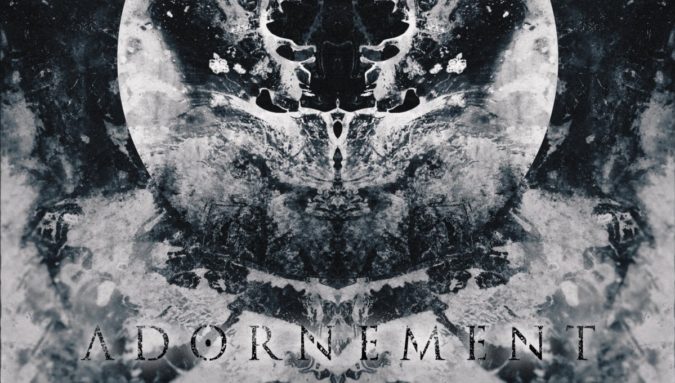 On a handful of previous occasions, I have been rather forthcoming about my amazement with solo, one-man musical projects. Sure, I understand the logistics of things, how the right equipment and the knowledge of how to use it are the means by which certain things are possible.

You must admit though, even with access to the most incredible, state of the art equipment, it is all for naught if the person, or the project, is some talentless hack. Of course, with enough smoke and mirrors, enough bells and whistles, and enough spit shining, some people can fake things just fine to their advantage. Assuming of course, that someone listening is the right amount of clueless and does not know shit from shinola, so to speak.

Thankfully, absolutely none of this has any bearing on why we are here, which is to inspect the late March released introduction to ADORNEMENT. It arrives in the form of a self-titled, instrumental three-song EP, and all of it, inside and out, every jot and tittle, note and nuance, is the product of sonic shot caller Jason Hirt. All of the music is written, performed, recorded, mixed, and mastered by him, while only a single item related to the EP is not: the album artwork is courtesy of Stefan Skjoedt.

What Hirt accomplishes here is nothing short of astounding to someone like myself, and I must surmise that it begins with imagination. The ability to form ideas internally, to invent conceptual canvases, if you will, the blank slate where it all begins. Hirt clearly has that down, but then the trickier part begins, you know, the manifesting of those imaginings, but it doesn’t seem a daunting challenge to Jason.

What he has orchestrated and executed is a moving symphony of cohesive emotion that takes form as atmospheric post-metal. Knowing that Jason lives in Minnesota, a place I envision as a mostly wintery tundra (yes, I know it’s not like that… all the time), this music seems to fit. Yet, unlike the barren, frozen wasteland expanses I’m sure that I incorrectly associate, the ADORNEMENT audio is warming and vibrant.

There is an obvious headiness to this music, derived from its continually ethereal nature, and the absence of words or vocals serves to accentuate these qualities. I honestly believe that if there were a verbalized component to this, it would ultimately be a detriment, taking away from these impressive results. Yes, they are impressive, from the scope of musical styles melded into this, and the emotional after-effects they leave the listener with, Hirt has rendered a fine piece of artistry indeed.

“This idea has been tossed endlessly back and forth in my own head for years. The entirety of Adornement is driven solely by the idea of progression and growth, while creating from a genuine perspective. I think by challenging myself to do this release on my own from start to finish is the most direct and true way to convey that, flaws and all. Regardless, the feeling of having finished this project is a high I’ve never experienced before, and a level of fulfillment I could have never imagined.”

These three tracks are best experienced as an uninterrupted exercise of beautiful, but haunting ingenuity. The fluid ease at which we are literally transported, from “End To End“, to “Eclipse The Sun“, and then “Devoid“, is a journey unto itself. The destinations we touch down in along the way, even if only briefly, are powerful and thought-provoking. It is no untruthful invention to claim this exploratory audio is quite a transcendental phenomena and you miss it at your own risk.

Stream the eponymous titled first EP offering from ADORNEMENT in this review, or head over to Bandcamp for further streaming. Once there, you will find it is currently available as an NYP (Name Your Price) item. Enjoy!