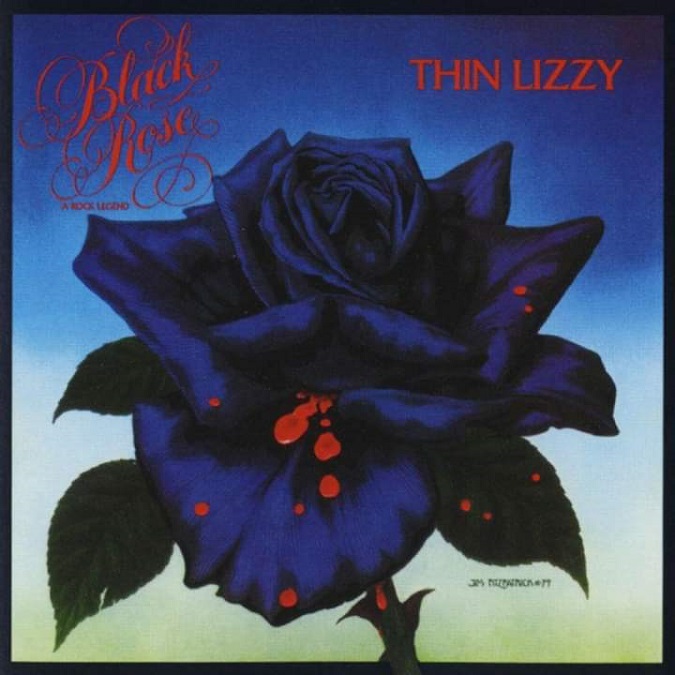 A black rose is often used as a way to symbolize the death of a loved one or a relationship.

Though THIN LIZZY may not have been exactly mourning the departure of longtime guitarist Brian Robertson, they WERE in a bit of a jam. Luckily, former bandmate Gary Moore was ready to swoop in to rejoin his Irish countrymen and help the band push forward.

There was always a melancholy and certain wistfulness to THIN LIZZY‘s music, due in no small part to lead singer and bassist Phil Lynott‘s roguish brogue, and on ‘Black Rose: A Rock Legend‘, Lizzy dug deeper than they ever had before. As the new decade loomed, Lynott was reflecting on some of his less savory habits he’d picked up along the way, and he knew it couldn’t go on forever.

The yin/yang dichotomy of the poppier side of the band alongside the gritty bare-knuckle rock that accounts for the bulk of the band’s material makes for a lively pairing, with the musicians operating at a career high in regards to musicianship and songwriting. The band fires out of the gates with the radio-friendly “Do Anything You Want To” with the nimble but powerful drums of Brian Downey laying down the foundation as the twin guitars of Scott Gorham and Gary Moore congeal and compete deliciously in their melody-drenched reveries.

The members of THIN LIZZY came from nothing and their hardscrabble existence was a point of pride. “Toughest Street in Town” revels in the blue-collar, rough-and-tumble world the band came from, and shows that they would always have that same underdog outlook on life, regardless of where they hung their hats. The funky shuffle of “S&M”, Lynott’s flanged bass guitar taking center stage, is a highlight, the track simultaneously seedy and tantalizing, the song a dark exploration of sexual peccadilloes, vices, and worse.

Phil’s bass jumps to the forefront again on “Waiting For an Alibi”, one of THIN LIZZY‘s catchiest songs, the searing guitar runs of Moore leaving nothing but ash in their incinerating wake. Anthemic twin leads carry us to the end of the tune with poise and passion to spare. “My Sarah” feels flown in from another album, with it’s much more gentle approach, but it’s not unwelcome. Lynott’s love of his newborn daughter shines through and gives the album an isle of reprieve among the darker themes that dominate the album.

Speaking of which, “Got To Give It Up” is Lynott’s confessional, Phil being brutally honest about how heroin had gone from pleasure to pain, with him trapped within its walls. The emotional outpouring that flows from Moore’s outro solo implies that Phil’s issues were apparent to everyone, even Gary as he was passing through the band’s membrane, and it was affecting everyone in its own way. The uptempo “Get Out Of Here” is another quick shot to the solar plexus, Lynott admitting “I used to be a dreamer / But I realize that it’s not my style at all / In fact it becomes clearer that a dreamer / Doesn’t stand a chance at all”. “With Love” is a smooth-flowing song full of jabbing guitar breaks and pensive lyrics, Lynott’s ruminations showing how his constant battle of finding and keeping love was another struggle that he wrestled with.

There is a stateliness to the title track, “Roísín Dubh (Black Rose): A Rock Legend”, that is uncommon in any genre, but for rock, it’s something of a miracle. The song strides forth with dignity and grace that makes it an easy choice for citizens of the Emerald Isle to point to as their unofficial anthem, with apologies to “The Soldier’s Song.” This song defines what the word “epic” means, with Lynott singing of Ireland’s rich history, the tales of long ago being kept alive for future generations. The uniquely Celtic melodies float along majestically, thoughts of a hard rock jig never far away. Album closers don’t get any grander, and the song stands as THIN LIZZY‘s undisputed masterpiece.

This was THIN LIZZY‘s most commercially successful album, perhaps even artistically, but that didn’t mean everything was well. Lynott and Gorham’s bad habits were a constant drain on morale, and Moore left abruptly in the middle of a U.S. Tour in support of the album. Things were unraveling inside the band at an alarming rate, the edges and seams distressed and threatening to give out at any time.

The albums that followed were solid, often displaying flashes of brilliance, but this was where THIN LIZZY shined the brightest, the magic that was generated here as rare as a four-leaf clover. It’s a shame none of the luck they were so desperately in need of ever came to fruition in those last few years, the band circling the drain as the consequences of their lifestyle began to exact their heavy toll. The group disbanded in 1983, and after releasing two largely ignored solo albums, Phil died in an English hospital in January 1986, from complications brought on by pneumonia and septicemia at the shockingly young age of 36.

Despite this sad end to one of rock’s true poets, THIN LIZZY‘s reputation as one of hard rock’s greatest bands only continues to grow, and the enduring love and appreciation for the late Phil Lynott ensure he’ll live on forever in our hearts.